In this continuing saga of epic movies and their matte shots I've combined several films today as the matte output on each is minimal, yet still important, with one of these pictures receiving an Academy Award specifically for it's matte paintings.  All three of todays films are from the 20th Century Fox stable.  First up is Joseph Manciewicz' CLEOPATRA (1963) followed by Henry Koster's THE STORY OF RUTH from 1960 and finally the dire John Huston picture THE BIBLE (1966), based upon the popular bestseller of the same name. The so-called 'good book' certainly didn't translate to the screen as 'the good film' that's for sure. 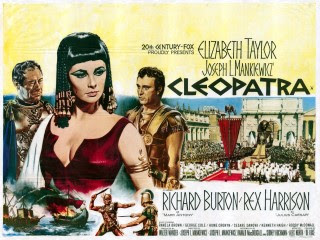 I was going to include DAVID AND BATHSHEBA too, but the terminal dullness of star Gregory Peck (possibly the least charismatic star ever in Hollywood film history) plus poor quality vhs images I decided to give that one a miss, even though Fred Sersen did the effects shots on it.
First up is the mega fizzer CLEOPATRA - a film nearly uttered in the same breath as the '29 Wall Street crash in terms of cost over runs and problematic production issues. The film was years in the making and didn't have alot to show for it in my book.  An exceedingly dull, way overlong bio-pic of it's star rather than the mythical lady of the title.
Inasfar as special visual effects went CLEOPATRA
had some okay miniatures shot in the Sersen tank and
a couple of matte paintings - two of which were terrific.
A contentious winner of the 1963 Academy Award for visual effects, and as it was up against  Alfred Hitchcock's THE BIRDS I felt it an unjust win.... but, you guessed it...don't get me started on AMPAS politics.  CLEOPATRA'S effects were supervised by L.B Abbott, whom I've mentioned many times on my blogs, though the Oscar actually was awarded to matte artist Emil Kosa jnr - a rare occasion indeed where a matte painter recieved an Oscar.  I can only think of a few, with Jan Domela getting the very first one for SPAWN OF THE NORTH and much, much later Yuricich, Ellenshaw and Whitlock doing the same - though they were for overall visual effects generally.
Abbott and Kosa, in their wisdom (seriously) turned to an age old technique to utilise matte shots at an important juncture in the story  - Cleo's arrival in Alexandria on sedan chair as pictured below.  The sequence neccesitated two majestic views of the port of Alexandria, and were designed as panning shots - thus negating the use of standard locked off mattes.  Bill Abbott and production designer John DeCuir (himself a former matte artist I believe) devised a clever set up with each  of the two views requiring a heavy frame which utilised two enormous glass plates in each camera angle - I recall something like 12 feet in length - with a strategically placed prop statue concealing the join of the slightly different orientation of each of the glasses all done under the supervision of Emil Kosa jr, the veteran Fox matte painter and all round  pioneering effects expert Ralph Hammeras painted the views on glass as foreground in camera glass shots.  Depending upon the version you hear either Hammeras, Kosa or another lady landscape artist, Mary Bone painted these.  I even read that John DeCuir worked on the matte art, but I doubt it.  I'm guessing all three worked on these two elaborate shots.  Hammeras spoke of it in his interviews with future Cinefex founder and editor Don Shay way back in the late 60's.  Hammeras' contributions to photographic effects in the industry should not be underestimated as he was one of the leaders in the field and invented several processes, yet remained curiously under-credited for most of his screen work - mostly matte painting and miniature photography on loads of films for Fox.
It's quite possible that the other matte, a static shot of a city, may have been painted by the Percy Day trained former Shepperton matte artist Joseph Natanson who by that time was working exclusively in Italy. The 1960 film THE STORY OF RUTH is another quite big 20th Century Fox film with some nice matte shots, again supervised by Emil Kosa jr under L.B Abbott.  Fox still had a matte department and among the roster of artists still employed was Menrad von Muldorfer, an artist whose career went back as far as THE RAINS CAME in 1939. Matte artist and former departmental head  Ray Kellogg had left to persue an independant career but still came back to work on several films such as the previously mentioned CLEOPATRA and numerous others. 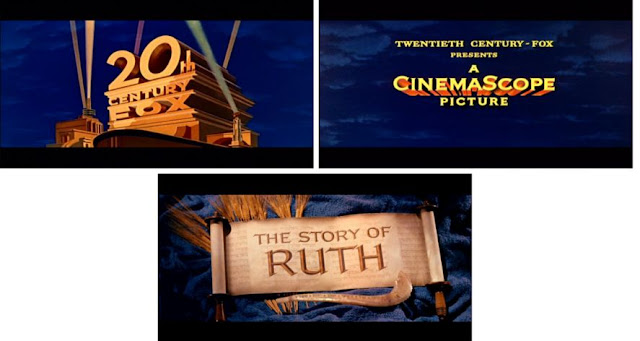 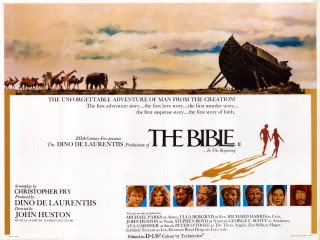 John Huston's THE BIBLE made in 1966 I recall years and years ago as a serious candidate for those sleep deprived souls who really need something to get those eyelids-a-shutting.  THE BIBLE (based upon the novel of the same name) was an odd film for Fox, in fact I'm not sure how much they had to do with it at all except to release it.  It was an Italian shot Dino De Laurentiis deal, and all of his films seemed to have odd distribution arrangements, so it's anybody's guess.  As far as I know the Fox effects people didn't have any involvement and it was a Film Effects of Hollywood contract.  F.E.O.H was a highly successful optical effects company established and run for decades by the late Linwood Dunn.  They had a small matte painting department with artists such as Albert Maxwell Simpson and Cliff Silsy on staff, with other painters such as Jan Domela coming in on some films and tv such as THE MAN FROM UNCLE and of course Albert Whitlock painted for several Linwood Dunn films and television shows such as STAR TREK.     *special thanks to Domingo Lizcano for THE BIBLE frames.