The Epics... KING OF KINGS matte shots - part one in an ongoing series

For those of you interested in many of my topics, please bear in mind that I frequently update certain blogs such as the Jan Domela page, the Warner Brothers page and the Albert Whitlock page as better or newer images come to hand.  A number of changes were made to the Whitlock page the day after I published it, so if you like Al's stuff, check it out from time to time.  A note here - lately I've had problems in keeping the links alive of new pictures added, with the result being that for some unforseen reason some pictures don't seem to 'open' up as bigger images.  I struggle with the intricacies of computer geekdom, so bear with me on that...

So, on with todays theme - THE EPIC MOVIES - the first in an ongoing series whereby I will pay tribute to many of the grandest matte painted effects from, in general, the Biblical genre of big productions, most of which were churned out in the fifties and early sixties, largely by MGM and 20th Century Fox .   I'll be looking at such films as BEN HUR, THE GREATEST STORY EVER TOLD, THE STORY OF RUTH, THE ROBE and others of the vein. 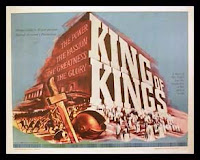 Todays film is the 1961 MGM remake of KING OF KINGS, which wasn't a bad show and although I'll admit up front to taking these so called scriptural recreations with a grain of salt and purely big screen escapist entertainment.  The alledged 'message' isn't my thing, just the spectacle. 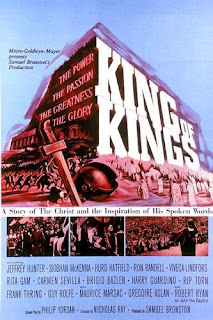 I've covered alot of MGM material here in the past (and still have a lot more to come as they seemed to have the, if you'll pardon the pun, lions share of matte shots from the forties and fifties.  Most of what I've included from that studio previously has been effects shots carried out under the supervision of the eccentric and, to some, utterly mad, Warren Newcombe.  By the time of KING OF KINGS, Newcombe was long gone - both from the studio and from this earth, in what has been suspected as some sort of espionage assassination within a country not far from the United States border, that isn't Canada (hey, work it out).  Newcombes replacements at MGM were long time Fox matte artist Lee Le Blanc and veteran visual effects cinematographer Clarence Slifer in the matte department, while long standing effects man A.Arnold (Buddy) Gillespie retained authority over the practical effects, miniatures and process departments and Robert R.Hoag looked after the optical effects unit.  I've written extensively about Slifer on my GONE WITH THE WIND and numerous other Cosgrove posts previously.
These guys all produced a number of wonderful collaborative visual effects shows over the years, although LeBlanc only remained with the studio for around 5 years from 1958 and left to seek a quieter career in fine art.  His Lee LeBlanc memorial art gallery still exists (exactly where, I don't know - but quite out of the way by all reports) where not only his fine art is displayed but also a number of his old MGM matte paintings from shows such as BEN HUR, GREEN MANSIONS and PLEASE DON'T EAT THE DAISIES.
In LeBlanc's matte department was long time journeyman matte painter Matthew Yuricich, (who himself is headed for a retrospective in this very blog sometime soon...watch this space).  Matt had been a trainee at Fox under Fred Sersen around 1951 and eventually became one of the most prolific and least credited matte painters ever, and is perhaps the only 'golden era' matte man still alive today, and , based upon the last time I spoke with his long time friend and former apprentice, Rocco Gioffre, Matt's still in good spirits in his mid eighties.  We can assume that some of todays matte art is from the hand and brush of Matthew.  His catalogue of titles is extensive and he was MGM's mainstay of matte art for many years from the late fifties up until they shut down their matte unit and threw all the decades of precious artwork into garbage trucks and tore down the matte building - though thankfully quite alot was 'rescued' and in fact I have a number of excellent photographs from a private collector of some of these wonders, which I'll post soon.

Well, that's it for KING OF KINGS.   I tested this page and as you'd guess, the goddammed links mostly don't open, so I went back in and made the pics as big as possible to try to make up for that, so until someone can help me out with that it seems the blastard blogger is ripping me off.
I'll be putting up another epic matte show tomorrow, so anyone interested, tune in and enjoy this great art.
Peter
Posted by NZPete at 14:03