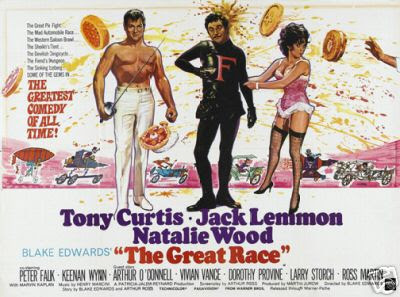 One of Warner Bros studios big budget shows of the sixties, THE GREAT RACE (1965) was a particularly loud though undeniably fun film with alot going for it.  Star Jack Lemmon, whom I'm very fond of, (especially in THE ODD COUPLE) was really allowed to cut loose hare and personify a hosh-posh of elements from every cartoon villain you've ever seen.
Tony Curtis was his usual dull and utterly forgettable self, with Peter Falk and Natalie Wood shining here.  Blake Edwards knows his stuff when it comes to slapstick comedy and in fact made a couple of the funniest films ever, THE PARTY and RETURN OF THE PINK PANTHER  - both with Peter Sellers. 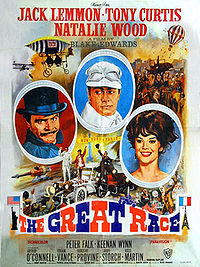 Henry Mancini contributed a sensational comic score that works perfectly, with the wonderful centrepiece musical number by Dorothy Provine being one of those numbers you just can't get out of your mind for days afterwards - in fact I'm playing it right now as I type this ("He shouldn't a had, ought-to-have had a swang on me").
An aspect I liked about THE GREAT RACE was that it won the Oscar for best sound effects editing - by one of the greats of sound effect creation, the legendary Treg Brown.  Now if anyone out there is anything like me, a fan of Chuck Jones Looney Tunes cartoons of the fifties, you'd know that Brown was Warners' chief sound cutter to all of those hundreds of six minute marvels - sound effects that were unlike ANY other animation studio in their sheer lunacy and incongruent hilarity.  Chuck Jones himself credited Brown as one of the great unsung heroes of the Warner Bros cartoon division for 30 years.