It's time friends once again for another, hopefully fascinating, retrospective journey into the wonderful world of the handmade special effect.  Today we will examine the remarkable Oscar nominated effects work from Steven Spielberg's somewhat maligned, though undeniably spectacular 1979 epic, 1941. Despite it's many flaws - not the least of which was a seemingly freewheeling, out of control, all or nothing overindulgence - the film remains a treat for all fans of old school trick work, a dizzying array of on set mechanical and stunt gags, vast full scale physical effects and jaw dropping miniature set pieces, the likes of which we hadn't seen on the theatre screen in decades, and certainly not on such a massive scale.
I worked for the New Zealand film distributor of 1941 at the time and I clearly recall the film's campaign and splash release which, despite high expectations failed quite miserably at the box office and just couldn't find an audience.  I recall it was a major flop worldwide on initial release though I believe it found a dedicated audience decades later at revival houses and on DVD and recently on a sparkling BluRay edition.

So, as an event film, before event films became commonplace, 1941 very much invokes the flavour of films such as IT'S A MAD, MAD, MAD, MAD WORLD (1963) with hit or miss mixed results. John Milius is a film maker and screenwriter I much admire (whose various interviews and commentaries over the years are always well worth paying attention to), and with co-writers Bob Gale and Robert Zemeckis concocted a wild, rollercoaster ride of noisy slapstick mayhem - perhaps too much so - all very loosely based upon an apparent actual incident in Los Angeles where a mild state of panic may have ensued when reports of possible or imagined sightings of Japanese off the Californian coastline. Director Steven Spielberg assembled a large crew and commenced pre-production as far back as 1977 right after CLOSE ENCOUNTERS OF THE 3rd KIND.  With the vast and worthy success of JAWS, the director was afforded an open door (and cheque book) to whatever project his heart desired.  Amid the large cast were a number of standouts, often amongst the lesser known players, especially the vastly under rated Treat Williams - so brilliant in Sidney Lumet's corrupt cop masterpiece PRINCE OF THE CITY (1982).  Bobby Di Cicco, Dianne Kay, Nancy Allen and Tim Matheson also shine amid veterans such as Robert Stack, Slim Pickens and the great Warren Oates.  The film isn't especially funny, sadly.  1941 is of the school that thinks the louder it is the funnier it is.... Not so.  While it's certainly entertaining (though the extended BluRay edition just goes on a might too long) I found enormous appeal in a few of the least likely of places, such as the wonderfully choreographed dishwashing sequence near the start in Dub Taylor's diner kitchen; the table top Gene Kelly routine with a cleverly utilised dance/stunt double substituting a principal player at key moments in a tremendous routine - and all in one uninterrupted take - and also I loved the extended Jitterbug sequence in the USO club. Terrific stuff that almost made me forget about the eternally irritating Eddie Deezen. 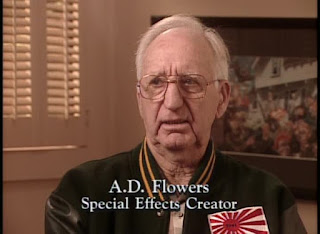 As a special effects film, 1941 has much to discuss.  Very early on in the process, Spielberg engaged key effects personnel to design and construct the quite massive roster of special requirements - both full scale and miniaturised - for a number of important set pieces in the film.  Key to that end was long time industry veteran mechanical effects expert A.D Flowers, one of Hollywood's most highly regarded men in his field.  Flowers, who passed away in 2001, started his career at Metro Goldwyn Mayer in the late 1930's, working on films such as THE WIZARD OF OZ and many more.  Flowers (whose full name I've never been able to uncover!) would become an important member of MGM legend A.Arnold Gillespie's special effects crew and assisted on the Oscar winning miniature and pyrotechnic work on such legendary films as the still excellent THIRTY SECONDS OVER TOKYO (1944), GREEN DOLPHIN STREET (1947) and FORBIDDEN PLANET (1956) to name but a few from the Golden Era.

In his memoirs, Arnold 'Buddy' Gillespie wrote with much admiration of A.D's skills, knowhow and friendship.  In his later years Flowers would provide outstanding mechanical effects work on shows such as THE TOWERING INFERNO (1974), the mind bogglingly immense project that was APOCALYPSE NOW (1979), and much creative bloodshed for the three GODFATHER pictures for Francis Coppola.  Flowers, who often worked in collaboration with old time effects cameraman L.B 'Bill' Abbott, engineered some of his very finest work for TORA! TORA! TORA! (1970) which deservedly won him, and Abbott, each an Academy Award for best special effects.  On 1941 Flowers worked closely Logan Frazee, with whom he had partnered with on THE TOWERING INFERNO a few years before. 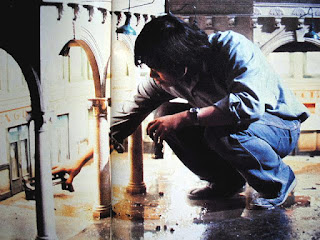 As a picture with such a large array of demolition and demands for larger than life action, director Spielberg immediately signed on one of his CLOSE ENCOUNTERS principal creative people, Greg Jein.  A highly sought after specialist in miniatures, Jein's career in movies began with spaceship model construction for the controversial FLESH GORDON (1974) and a few other small scale films such as John Carpenter-Dan O'Bannon's DARK STAR (1974).  Greg would get assignments on numerous television shows and low budget flicks like LASERBLAST through the seventies which culminated in his getting the gig of his life, CLOSE ENCOUNTERS OF THE 3rd KIND (1977). 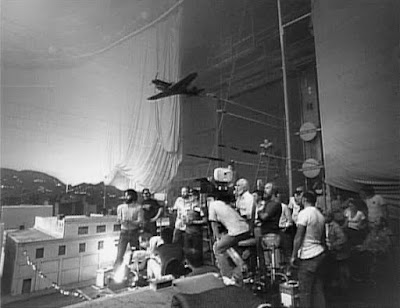 1941 would be a huge production in every respect, with Greg's miniatures department kept extremely busy building scale model sets of Hollywood Boulevard, an ocean side amusement park and a variety of airplanes, a submarine and a radio controlled tank.  Greg was a great admirer of the legendary Lydecker brothers, Howard and Theodore, who for many years had engineered astonishing miniature gags and effects shots that on screen far exceeded the modest at best budgets the brothers were repeatedly stuck with at Republic Pictures.  Absolute masters when it came to 'flying' miniature aircraft convincingly through actual outdoors skies, Howard and Theo's methods would be adapted and utilised by many subsequent practitioners over the years whose appreciation of the brothers techniques would lead to those in the industry the oft used descriptive term "to Lydecker a model" as a means to propel or 'fly' a model along usually three fine cables stretched across a set. Jein, with A.D Flowers, would extensively resort to this time honoured yet utterly reliable modus operandi on the shoot. 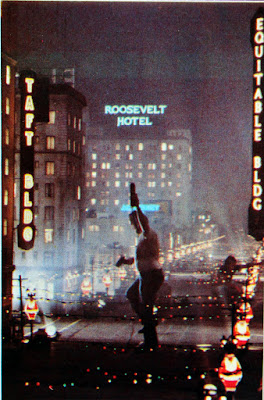 Another prime contributor to the effects output on 1941 was the aforementioned L.B 'Bill' Abbott, ASC.  Bill's career in trick work spans back several decades where, mostly at 20th Century Fox, Abbott was one of Fred Sersen and then Ray Kellogg's chief visual effects cinematographers.  Abbott was a jack of all trades in the field, with expertise in model work, cameraman and optical effects on hundreds of films and television shows, with 1941 being his last major assignment.  Through many years of experience Bill was an expert in model ships and 'miniaturised' sea effects sequences.  He developed ingenious ways in which banks of small fans could create just the right amount of believable wave action in a model tank shoot, which along with special chemical additives and colouring agents could alter the 'weight' of the water - no mean task when shooting miniature ships and so forth.  Abbott's ability as a visual fx cinematographer lent a polish to scores of films over his long career.  For 1941, the director hired Bill Abbott primarily as a visual effects consultant and to oversee the few optical effects shots. Abbott's former assistant, Larry Robinson was tasked with overall special visual effects supervision.  Unusually, on this production it was the principal Director of Photography, William Fraker, who would be enlisted to shoot both the main unit and the miniatures unit material rather than have a specialist cinematographer handle all of the model requirements.

Oddly, as this blog is primarily concerned with matte painted shots the film discussed today has few, with only one confirmed matte and a couple of other possibles.  Matthew Yuricich was matte artist on the show, with long time MGM effects cameraman James Liles also on board. As best as I can make out the ocean amusement park seen at the start is certainly a Yuricich shot, with maybe a couple of later wide night views over the San Fernando Valley possibly being painted as well. 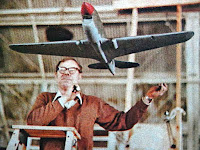 The film was one of five up for the Best Visual Effects Oscar that year, with the others being STAR TREK (great V'ger cloud effects design and execution), ALIEN (a class act all the way with less is more proving the key), THE BLACK HOLE (some good matte art and models) and MOONRAKER (great o/neg Meddings miniatures of shuttle lift offs etc).  All had their strong points with ALIEN being not just the best movie out of the bunch by a long shot, but also collecting the SFX Oscar. 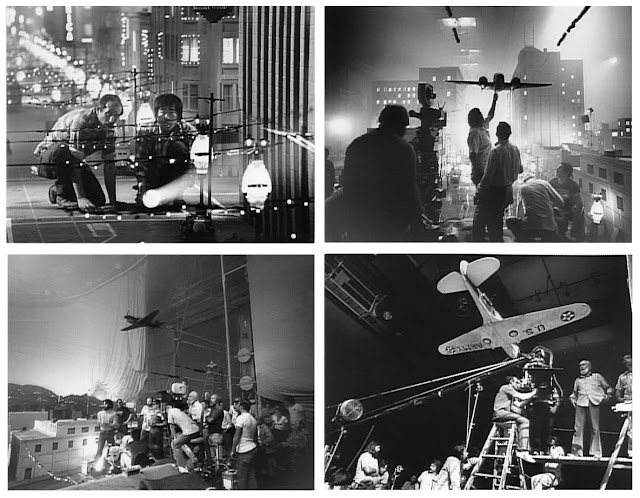 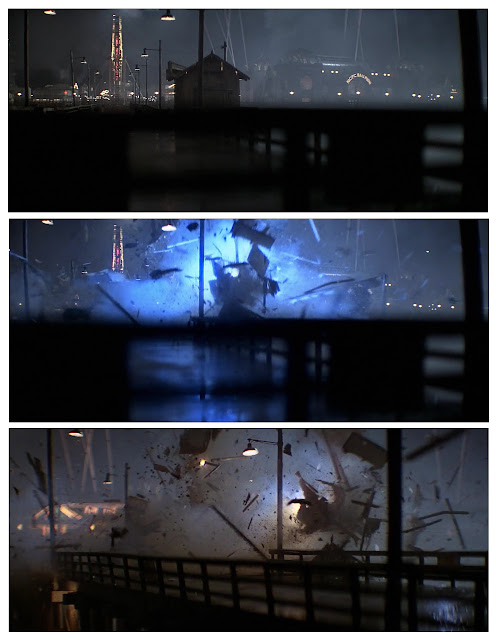 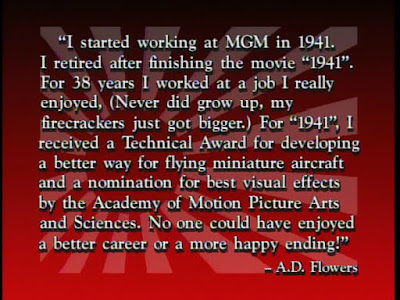