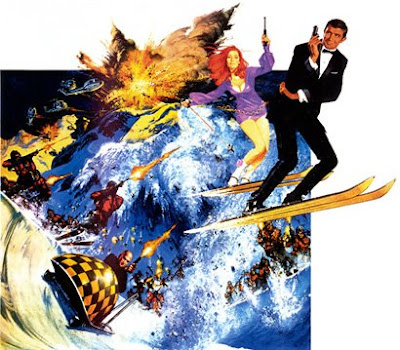 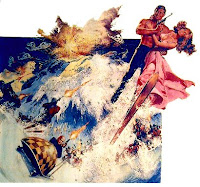 SHE.... a tribute to the special photographic effects of the landmark Merian C.Cooper classic plus an effects comparison with the Hammer re-make 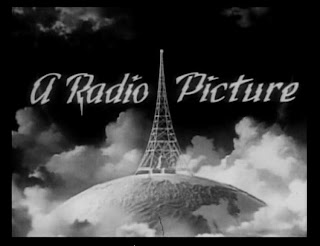 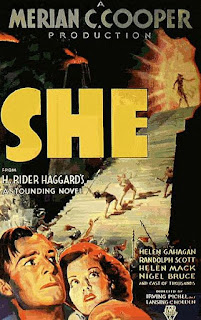 H.Rider Haggards' epic story was one ripe for the picking by adventurous Hollywood producers and film makers - so ripe in fact that it was adapted for the film medium (I believe) no less than five times in it's true to the book form and probably numerous other times in variations upon the same theme from old serials of the 30's and 40's and even a few of the TARZAN films used elements from this timeless classic a few times that I can recollect.  No doubt about it, Haggards' story is a wonderful boys own adventure yarn that set the imaginations and sweaty palms of many an adolescent boy (mainly) into top gear back in the day.
The film adaptations included (as far as I know) a couple of silent versions in the twenties, of which I know nothing about, prior to RKO acquiring the rights around 1933 at which period the great Merian C.Cooper was immersed in KING KONG and it's ill advised follow up SON OF KONG.  Given Cooper's proven track record of motion picture thematic interests I am sure the SHE outline set him on fire!  Here was a story with all the ingredients for a ripping good adventure yarn, with excitement at every turn and large lashings of sex and violence in the mix.
RKO was the perfect studio to embark upon this epic - a studio that stepped outside of the square when it came to the type of wild ride adventures such as the two KONG's, THE MOST DANGEROUS GAME and others where visual flair and technical experimentation would be a prerequisite.  The majors such as MGM, Paramount and Warner would have been so out of their depth with these pictures.  Theirs was a world of regular storytelling with box office super stars and such.  RKO was the studio for SHE. 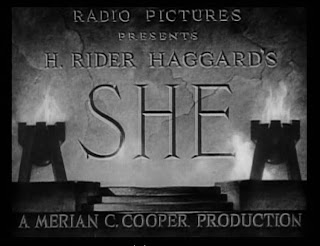 The inhouse special effects department at RKO was a superb set up by all accounts - run by Vernon L.Walker, a noted cinematographer from the early nineteen twenties on dozens of silent pictures and moving into special camera effects around 1930, Walker helmed the effects department at RKO from around 1931 until his death in 1948 at which time his long time assistant and key creative technician Linwood Gale Dunn took over the camera effects department with Dunn proving to be a titan in the optical effects world and active up until his death in 1998.  *(I'll be doing a tribute on some of Dunn's work such as the amazing SWING TIME effects here in the near future).

The RKO effects unit was a strong one under Walker, with Linwood Dunn as key optical composites man and in the early days matte cameraman,  visionary artists Mario Larrinaga and Byron L.Crabbe not only matte artists but key creative personel on many pictures.  Numerous matte painters were in the employ of RKO over the years such as Fitch Fulton, Albert Maxwell Simpson and Paul Detlefsen  -with Detlefsen co-designing and painting the revised world turning RKO logo and Simpson being long associated with Linwood Dunn right throughout the studio's relatively short history and on through Dunn's independent Film Effects of Hollywood era in the sixties.  Harry Redmond and his son Harry Redmond jnr were mechanical effects experts and worked on many RKO shows such as KONG.  Later on people such as Russell Cully came on board as matte and effects cameraman contributing much to shows such as CITIZEN KANE.  Of course KONG was a story in itself and need not be elaborated upon just now *(I'll do the mattes from both the RKO KONG's later on)
So, it is with great pleasure that I present the amazing visual effects from the original 1935 RKO production of SHE, and as an added comparison also the matte work from the interesting, though not nearly as spectacular 1966 Hammer production.  Forget about the abysmal 1985 version - utter crap!
So now, on with the show....
Special photographic effects - Vernon L.Walker, ASC
Optical cinematography - Linwood G.Dunn
Matte artist - Mario Larrinaga (and I suspect Byron L.Crabbe and maybe Albert Maxwell Simpson)
Matte photography - Guy Newhard
Special effects - Harry Redmond snr and Harry Redmond jnr
Sabre Tooth Tiger Model - Marcel Delgado and Victor Delgado 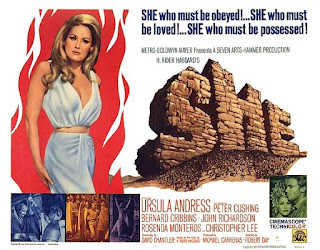 Being a Hammer film a certain degree of economy is expected.  Now don't get me wrong, I enjoy Hammer films and many are still good even today, though I can't help but feel that to embark upon something as grand as SHE the little studio may have bitten off more than it could chew.  On the plus side is the casting of Ursula Andress, not an actress I particularly care for but I must admit she was perfect for this role and is miles better than the 1935 variant.  Peter Cushing is always good no matter what as is Christopher Lee in the requisite evil role. 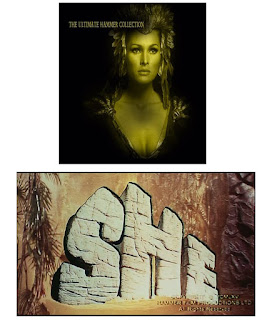 Production wise SHE is hampered by the budget constraints, and it shows.  They make do with very basic and often poor sets on what is obviously a very tiny Elstree soundstage.  Even given those constraints I feel that the production could easily have 'opened up' by including more matte art to at least give the tiny and claustrophobic interiors a bit more breathing space.  The production had the services of three good matte painters - Les Bowie, Bob Cuff and Ray Caple, though by this time in his career Bowie was no longer painting rather farming it all out to his former apprentice Ray Caple and long time matte artist Bob Cuff.  The matte shots which are in the film are in some cases very good (the lost city) and in most cases functional though quite dull and uncreative.  Mind you, the film was shot in HammerScope 2.35:1 and regrettably the region 2 DVD is cropped at 1.85:1 thus losing edges of the frame - and a ghastly 'Hammer Collection' transfer it is too.
Missing too is a score even remotely near the heights of Max Steiner's original though what there is here is serviceable enough.   Still, all up a reasonably entertaining film though give me the RKO one any day...
Special effects - George Blackwell, Kit West and Ian Schoones
Effects cameraman - Kit West
Special processes - Les Bowie (Bowie Films)
Matte artists - Ray Caple and Bob Cuff
Matte photography Ray Caple and Leslie Dear
Model maker - Joy Cuff
Special make up effects - Roy Ashton