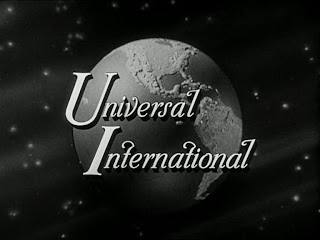 Flash back to a time when going to the movies (or as we'd have said here "to the pictures") was an event... counting that hard earned, scrimped and saved coinage - the result of delivering the evening paper (The Auckland Star - R.I.P) in all sorts of climatic conditions in a dedicated plan to buy as many Airfix model kits and see as many double features as the lean savings would permit - and at 25 cents a seat in the stalls, 30 cents upstairs in the circle at the Capitol Cinema in Balmoral this was a pretty good deal.  More classy cinemas such as the beautiful Mayfair in Sandringham, Auckland charged around 50 to 75 cents admission but it was worth the long bike ride to my Grandma's house nearby to see what The Mayfair had on offer. 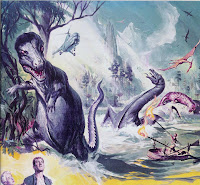 This was an era when the movie house was just that, a stand alone old picture palace, usually dating from the 1930's and generally giving the impression that the date of construction was probably the first and last time a broom ever touched the worn out carpet!  Don't confuse the movie going of today with it's teflon coated architectural eyesores that claim themselves as cinemas!  My God, how depressing things are today - not just in what qualifies as filmed entertainment but also the global corporate entities than operate these cinemas without the slightest idea of showmanship or motion picture exhibition. A cinema lobby nowadays might just as well be a dentists' waiting room (smells the same) or an airline check in.... it's that bad. Hell, the last film I actually even saw in a 'cinema' was Peter Jackson's KING KONG.  I get a better show on DVD or BluRay on a top of the line 55 inch Samsung monitor at home.  The only plus factor at the new age of cinema are the great ice creams!
Today I'm giving a discertation of sorts on the delirious world of the Universal Monster and Science Fiction shows made in the fifties and still showing on double bills in the next two decades.  Some of these were bottom of the barrel in most every respect (THE MOLE PEOPLE) while others were classics that still stand up today (INCREDIBLE SHRINKING MAN) while others were just plain fun despite their flaws (THE MONOLITH MONSTERS).  So for those who recall such entertainments sit back and enjoy a look at the special visual effects that made these shows endearing, if not always exactly memorable.  AVATAR these aint, but I know which I'd rather watch.
For more on the extensive career on matte artist Russ Lawsen, click here

An almost entirely forgettable entry into the genre with crazier than you'd imagine possible scenario and bad acting.  The photographic effects work is pretty good with several nice sprawling matte painted shots by Russell Lawson at least giving the picture a bigger look than the small budget would suggest. 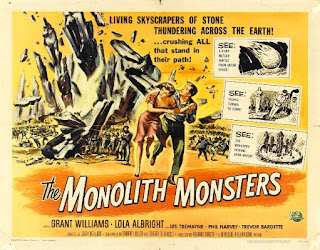 Now this is actually a far better movie than the ad line would suggest, in fact I found it quite absorbing from start to finish with a good cast and good pacing.  The whole notion of ever expanding rock like formations advancing on the landscape worked pretty well and the effects were good too.

Now this is an excellent movie and it's filled with great visual effects and much travelling matted in arachnid mayhem that must have tied up the optical department for a year! 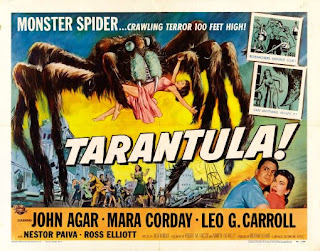 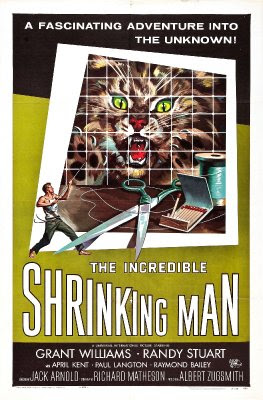 And now I think I'll call it a day.  Enjoy