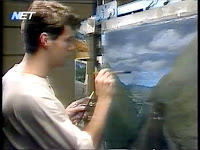 Firstly, I'd like to thank those readers who wrote me telling how much they enjoyed the first part of The Sky's The Limit.  As promised in my last blog, I'm back with the substantial (and I do mean substantial) second half of The Sky's The Limit with literally hundreds of magical matte shots from a wide variety of films from the silent era through to the end of the photo-chemical era with many rarely seen matte shots along with some more familiar to us.

In addition to the studio matte art we're more familiar with I'm delighted to include a number of extremely rare mattes from European, Latin American and Russian cinema from many films largely unknown to those of us outside of those countries.  For these I am seriously indebted to my friend, Madrid based special effects man and VFX historian Domingo Lizcano - a man who truly knows his mattes and the many, largely unrecognised artists behind them.  Domingo has researched and collected material on effects artists such as Pierre Schildnick, Emilio Ruiz, Enrique Salva, Nicholas Wilke, Charles Assola, Ralph Pappier and many other masters of European and Latin American cinema that I'd be none the wiser of had it not been for Domingo's tireless research efforts.  The frame at left is the work of Spanish art director and glass artist Enrique Salva with assistant and future effects genius Emilio Ruiz del Rio.  Matte artist Pierre Schildneck was an interesting figure in advancing the artform in European cinema.  Of Russian birth, Pierre would work alot in France as a set designer with Walter Percy Day and ventured into miniature work in the thirties and later glass shots.  Schildneck would move to Spain whereby he would adopt the name of Pedro Schild, which to me is interesting when you consider to what lengths Italian actors and directors would go to in the 60's and 70's to 'Anglicise' their names for American audiences - often with hilarious consequences.  Anyhow, as usual, I digress!

I have a correction in regards to one of the mattes I included in the first part of this lengthy piece.  The sunset shot of the palace in sillhouette from INDIANA JONES AND THE TEMPLE OF DOOM (right).  Craig Barron, who photographed the shot for ILM wrote me that it wasn't a matte painting in the true sense of the word - rather a cleverly conceived and executed masonite cut out profile by Michael Pangrazio of the palace with limited painted detail that was actually taken out of doors and set up against a real sunrise, with the spectacular results being a first generation original negative effect.  I recall Craig achieved a similar effect a few years later on THE WITCHES OF EASTWICK to excellent result.  I think Mark Sullivan may also have employed a similar trick in the third INDIANA JONES picture, THE LAST CRUSADE.

So, without further ado let us stroll once again down that picturesque boulevard of cinematic creativity that we all appreciate and miss so much.... the sheer magic of the matte painted sky.