Matt's Mattes: a photo tribute to the career of Matthew J.Yuricich


What's new on this blog...  just before my tribute to Matthew Yuricich I'll outline a few new things of note.  One, is that summer is just around the corner and the weather is getting nice and warm and the days long - which always screws the minds of northern hemisphere types, which comprise most of the visitors to this blog.

There are a number of additions to pages in the blog such as some pictures of one of the surviving original mattes from THE GREAT RACE, supplied by visual effects cameraman and stop motion guru Jim Aupperle. thanks Jim.  Also I've loaded a number of extra pictures into the popular War Films blog that were initially omitted due to space and concentration span concerns for those who might visit the page.  The Warner page has some more as well, such as the clifftop matte shots from NOW VOYAGER.

On matte shots - I'm always extremely interested in hearing from anyone who may have original paintings, images of paintings or screen shots of matte effects that they'd be willing to share and have 'on show' (as all great mattes should be).  The purpose of my blog after all is to bring this lost artform into the public eye and above all else to celebrate the artisans behind these great shots.

I'm now the proud owner of not one, but two golden era Warren Newcombe matte paintings from MGM.  This brings my grand total to, well let me see.....'two'.  It's a thrill to have a couple of pieces of Hollywood visual effects history right here in my grasp.  The paintings never fail to inspire me, especially as they are from my favourite period of matte art, the 1940's, where studios such as Metro went all out creating vast numbers of cinematic scenes and shots through the very busy matte department.  Things dropped off considerably in the following decade with the numbers of matte shots reducing steadily due to a more location based sensibility rather than relying on the studio artisans to create the mood.


It is with great pleasure that I present today's special tribute... to one of the least ever screen credited, some might even say, criminally under-credited though without a doubt incredibly industrious movie matte magicians - Matthew Yuricich.  I have a large number of great matte shots images here, which as usual I'm forced to go through and prune the material to a reasonable length.

There is a wonderful self penned biography by Matthew himself which reveals much about his pre-movie life and in particular his three years in the armed forces US Navy  and his military duty throughout the Pacific campaign which I recommend reading:
http://www.ussnassaucve16.com/Memories are made of this/Yuricich Matthew.htm
If ever there was an utterly unforgettable snapshot of a film technician in the old Hollywood era, it has got to be this wonderful picture at left of Matthew with a certain Marilyn Monroe, taken at a Fox studio function in the mid fifties.  The photo, courtesy of Rocco Gioffre is humouresly inscribed "To Rocco...eat your heart out...Matt Yuricich".  A gem!   It's been difficult over the years in trying to put together an accurate list of film credits for Matthew, with even imdb being somewhat lean in film credits until fairly recently when I noticed a number of hitherto unknown titles starting to appear on Matt's listing.  Naturally none of this is helped by the fact that Matt barely ever received any sort of screen mention of any kind as he was never a head of department  -  at least not until very late in his career in the late 80's. 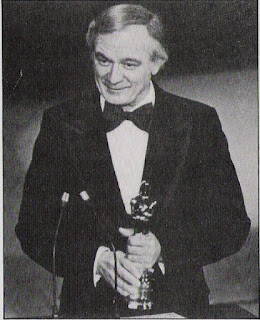 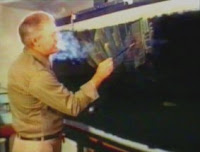 My research suggests that Matt only started receiving screen billing around 1976 with LOGAN'S RUN - and that after a career in special effects since 1951 is very sad.  The release of that film was the first time I'd heard the name "Matthew Yuricich", and I recall obtaining one sheets and 11x14 lobby cards from a kindly sole at the New Zealand distributor, Cinema International Corporation at the time, and the pressbook mentioning Yuricich and erroneously crediting him as 'matt artist' - (as also happened with Syd Dutton on the BUCK ROGERS title crawl too a few years later as I recollect!) 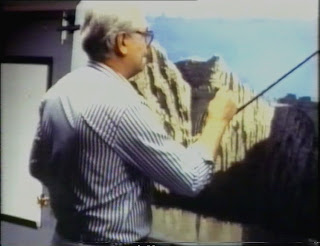 It's a fairly safe bet though that Matthew had input into various aspects of matte work and the gag effects employed on many 20th Century Fox pictures from around 1950.  By his own account Matt never dreamed of getting into movies, and as with many of us, he more or less slipped into his vocation more or less by accident.  Following demobilisation after WWII, Matt pursued a degree in fine art with the notion of gaining work in any sphere of art if possible.  As chance would have it Matt found his way onto the 20th Century Fox lot in 1950 as an assistant in Fred Sersen's large and highly regarded camera effects department.

By Matt's own admission, the role of an assistant "wasn't one of glorious artistic achievement"  and he spent a fair amount of time in those early years learning and carrying out the intricate and time consuming process of rotoscope preparation for photographic effects shots with fellow budding matte artist, Jim Fetherolf.  The roto sillouettes were usually drawn and inked on large sheets of glass to correspond with the matte painted glasses prepared elsewhere in the department.  These early times saw Matt and Jim looking after a particular aspect of matte effects work which has always been of great interest to me both as a film enthusiast and a matte shot fan, that being those wonderful glittering neon lit theatre marquees which featured so prominently in films from the 30's through to the late 50's.  Said Matthew in 1977: "Jim Fetherolf and I used to paint all the theatre marquees used in motion pictures and we even animated all the lights.  We would do the simpler mechanical functions and being younger and steadier we did the animation and travelling mattes because we had a little more patience needed to stick to the frame by frame process".  Gradually Matthew moved into actual matte painting at the studio and worked on a number of pictures over the four years with Fox. 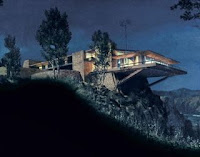 Circumstances at Fox lead to the departure of some of the matte artists and effects cameramen, with Lee Le Blanc, Clarence Slifer and Matthew all seizing upon the opportunities available at rival studio Metro Goldwyn Mayer, with LeBlanc eventually assuming headship of the matte department following Warren Newcombe's retirement.  Matthew stayed with the studio for many years working on everything from BEN HUR to SOYLENT GREEN before taking on many independent matte jobs following the closure of the MGM matte department in the mid 70's.  Matt painted for Warner Brothers on shows such as DOC SAVAGE, MAN OF BRONZE for scenes involving Ron Ely's North Pole hideout, and on films such as VIVA KNIEVEL where he painted in a mountain and train tunnel for an important stunt sequence. 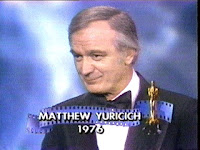 Other shows Matt painted on included the perennial Jan-Michael Vincent trucking action movie WHITE LINE FEVER where he supplied the Arizona desert headquarters , 'The Big W', of bad guy L.Q Jones.  It was the science fiction film LOGAN'S RUN though that got Matt one of his biggest gigs, and brought his up until then, largely unknown name into the limelight.
Matthew must be the only golden era matte painter still alive today, with as far as I can determine all of his generation of matte men now gone.  Last I heard from Matthew's former assistant and close friend Rocco Gioffre, Matt is still chugging along at 86 and doing well, living I believe in Washington State.  So, with that introduction I'm happy to present a photo album of memorable Matthew moments from his long and distinguished career.      I hope you enjoy it. 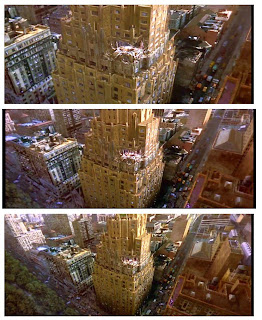