The Epics - Big Mattes from Smaller Productions - the final chapter

I'll make this my final posting in the series dedicated to epic films, as I have so many other topics I wish to  cover.   I have terrific mattes from a number of Disney pictures, a pictorial on mattes and miniatures for Hollywood War Pictures, a look at RKO's Visual Effects Department, an in depth retrospective on the Shepperton Studios Matte Department and more still on the back burner.

This edition of my 'epic' coverage takes a look at some sensational matte painted effects from mostly lesser known films that fall way outside of the typical big budgeted Hollywood extravaganzas we usually associate with this particular genre.  Today's posting is somewhat of a mixed bag, in as much as the first two films aren't really films at all - they were both made for television miniseries, although one did receive theatrical release in Europe under a different title.  The first two 'films' in today's lineup are superb showcases of the artistry of Albert Whitlock and his tight knit team at Universal Studios.
Also on show here is a small sample of the work of Whitlock's former Disney mentor Peter Ellenshaw and another of Pop Day's former trainees, Ivor Beddoes. For more on Beddoes' astonishing matte work in THE RED SHOES, click here.  Finally, I have some mysterious uncredited mattes from two big Anthony Mann historical shows, filmed in Spain and almost certainly painted by Spanish or Italian based effects artists, which are certainly worth a look.  I've also somewhat belatedly added some great silent era matte effects by Paul Detlefsen, Paul Grimm and Ferdinand Pinney Earle in an effort to cover as many bases as possible.
MASADA  (aka THE ANTAGONISTS)  (1982)
MASADA was a five hour miniseries made by Universal in 1982 and shot on location in Israel.  Outside of the United States this marathon show was re-cut down to a two hour feature and retitled THE ANTAGONISTS, which if you've seen the very long television version would indeed be a welcomed alternative (and a much more descriptive title).  There are a considerable number of fine Whitlock matte shots in MASADA on which Al's long time assistant Syd Dutton shared all painting duties, with some paintings having the brushwork of both artists.
Whitlock's long time cameraman Bill Taylor composited the shots, some of which were elaborate pan and tilt moves from live action across to glass painted cityscapes with additional fire elements added.

A.D   (ADDIS DOMINI)  (1985)
I've not managed to see this television film unfortunately, partly due to the near impossible availability of the film in any official format, thus I most grateful to Thomas Thiemeyer for these very rare frames from what appears to be outstanding Whitlock matte work.  The tele-film is noteworthy for being the recipient of Best Special Visual Effects Emmy 1985 - a nice swansong for Whitlock who would officially retire from Universal shortly thereafter although he kept active for the next eight or so years as far as his health would permit, providing consultation and hands on brush work for a number of Illusion Arts films such as COMING TO AMERICA, NEVER ENDING STORY 2, THE GATE and GREMLINS 2 to name a few.  It was gratifying to see not only Whitlock receive the Emmy, but also most of his unit as well: Bill Taylor, Syd Dutton, Dennis Glouner, Lynn Ledgerwood, Larry Schuler and Mark Whitlock


I realised almost too late that I had previously omitted one of the greatest single epic movie matte shots of all time... Peter Ellenshaw's magnificent glass shot of Rome from Stanley Kubrick's SPARTACUS (1960).  Now, the fascinating thing here is that both Ellenshaw and Whitlock had a hand in creating this wonderful matte as some sort of very unusual Disney rescue mission.  At that time Disney didn't provide services to other studios, so just how this single shot came about I'm unsure.  According to Craig Barron, "Whitlock started this painting but for whatever reason was unable to finish it - whereby Ellenshaw took it over and completed it. It certainly has an Ellenshaw look and feel to it". The common opinion is that despite the colourful history it is in fact Peter's painting.  Whitlock himself was quoted as saying that it was common at Disney for Ellenshaw to rework or improve upon the paintings of the other artists.
When interviewed for the book The Invisible Art Ellenshaw told Barron of being badgered repeatedly  by Kubrick with his nightly 3.00am phone calls just to see how the Rome painting was coming along!  Many years later Kubrick wrote to Ellenshaw on another matter and specifically made mention of Peter's SPARTACUS painting and just how delighted he had been with it.
Contrary to popular belief, SPARTACUS had more than just the one matte shown here - in fact  there are around a dozen other matte shots in it, though none as spectacular as Peter's solitary contribution, completed by Russell Lawsen, Universal's resident matte painter. Most of Lawsen's SPARTACUS mattes may be seen in my retrospective tribute to the artist here.

THE LONGSHIPS   (1964)
Ivor Beddoes was an interesting fellow - a former ballet dancer turned sketch artist turned matte painter turned conceptual artist.  Beddoes was taught the intricacies of matte painting by British master Walter Percy Day and painted on two Michael Powell pictures BLACK NARCISSUS (1947) and THE RED SHOES (1948) and thereafter one of Wally Veevers painters at Shepperton in the fifties. Beddoes left to do freelance matte and illustration work on films such as ATTILA THE HUN and the first two SUPERMAN films.  Beddoes passed away just a few years ago
FALL OF THE ROMAN EMPIRE   (1964)

I've written a little previously on my silent era BEN HUR posting about pioneering matte painter and epic visionary Ferdinand Pinney Earle and his contributions to what we know as matte painting.  Earle was without a doubt one of the two guiding lights in the development of this process - the other light being Earle's industry compeditor Norman Dawn.  The two were, by all accounts arch rivals in seeking ownership of the glass painting process and fought many a battle in the courtrooms in an effort to decide one way or the other.

These examples are from one of Earle's big biblical productions, directed and produced as far as I'm aware, by Earle himself.  To the best of my knowledge, DANCER OF THE NILE is one of those many 'lost' films from Hollywood's infancy, with just still images surviving.  In my extensive Tribute to Warner Bros Stage 5 effects unit blog I covered the work of Paul Detlefsen, one of the industry's most experienced matte painters.  To recap, Detlefsen got his start in matte art through Earle on another lost film THE RUBAIYAT OF OMAR KHAYYAM (also 1923) and continued his apprenticeship on this film, DANCER OF THE NILE and continued on with a long and illustrious career both in matte work and later in popular fine art.

I briefly touched upon NOAH'S ARK in my Warner Bros tribute, though have included another rare frame here.  I've not seen the film, though would love to if the matte shots and the odd old clip are anything to go by. Paul Grimm was matte painter on this and many other silent era films, having started in the industry like so many others as scenic backing painter as early as 1919.  Although he lived until 1974 Grimm had had enough of the moving picture industry and retired  just a few years after sound came in, leaving for good in 1932 to pursue a living as a fine artist who's works still fetch good prices.


I don't have any photographic effects shots from the first TEN COMMANDMENTS - only these old articles from Popular Mechanics magazine from 1923 which spell out the processes used to part the Red Sea the first time around.  Roy Pomeroy was photographic effects chief on this show with Fred Moran as his assistant.  The numerous travelling matte composites were supervised and carried out by Frank Williams - the leader in such technology at the time - in fact the only avenue for composite photography as far as I'm aware.  For more on Williams, visit my blog on the silent film SUNRISE. 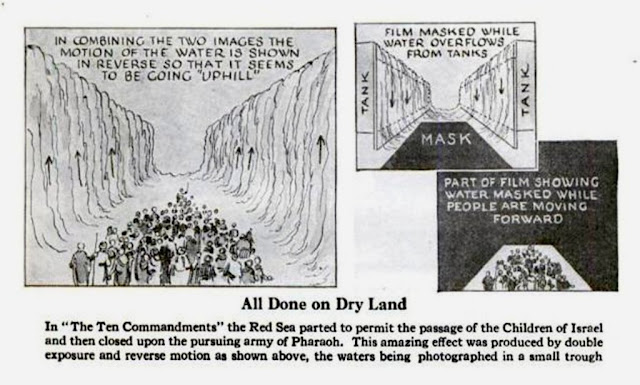 The final silent era glass shot, and in fact the last entry for the Epic films series, is this terrific uncredited glass painting from the silent Douglas Fairbanks adventure RICHARD THE LION HEARTED.