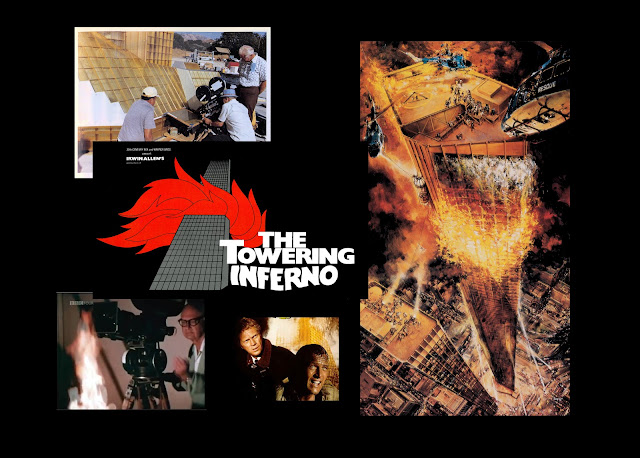 As a kid in the 1960's, I was shaped considerably by the numerous television shows of Irwin Allen, where much excitement, spectacle and out of this world adventure was to be had on a weekly basis.  I, like many of my readers I'm sure, grew up on things like VOYAGE TO THE BOTTOM OF THE SEA, LOST IN SPACE, LAND OF THE GIANTS and THE TIME TUNNEL - 100% kid friendly escapism one and all with LOST IN SPACE being my favourite of the bunch.  Perhaps the only other television film maker of the day able to capture the mind and imagination of a young NZPete to the same extent would have been the great Gerry Anderson who's THUNDERBIRDS, STINGRAY, CAPTAIN SCARLET and UFO were the equivalent of an obsessive compulsion in viewing enjoyment.

Irwin's shows were always a guarantee of grand spectacle (even though those vividly saturated colour schemes were only ever broadcast here in New Zealand in good ole' b&w until the mid 1970's when colour and a second channel came in!).  Irwin loved special effects and his programs were ample showcases for all manner of trick photography.  Miniatures, matte paintings, optical effects, split screens, crazy assed monsters and always those gratuitous explosions, often for no apparent reason other than to thrill kids like me to bits.  Those wacky, over the top electrical explosions with sparks and flashes showering all over the actors just blew my mind, especially when Allen introduced his crazy 'rock n' roll' camera with the cast swaying this way and that as the camera sways in tandem, suggesting the whole set of the Seaview or the Jupiter II was about to flip over!  Insane, but essential, as were those dramatically scored cliffhanger endings where we had to wait a whole god damned week to see what happened to the Space Family Robinson in LOST IN SPACE or David Hedison and pals onboard that wonderful VOYAGE TO THE BOTTOM OF THE SEA submarine.... Entertaining like nothing else of the era.  Great days!!

These shows were the first that drew my attention to 'special photographic effects', with the name L.B Abbott (and sometimes Howard Lydecker) always up on the screen during those end credits.  Abbott's name stuck with me as it was pretty rare to even see an effects credit back then on screen, especially on TV.  I'd often see John P. Fulton's name on re-runs of older Paramount and Universal pictures, which made Fulton a "name" trick shot star to me as well.  These gentlemen certainly managed to gain my attention back in the day.

As a producer and occasional director, Irwin turned out many feature films over the years, often with a bent toward grandiose spectacle such as THE STORY OF MANKIND, THE LOST WORLD, THE POSEIDON ADVENTURE, THE SWARM and the dire WHEN TIME RAN OUT (aka THE DAY THE WORLD ENDED).  Allen was the last of the 'showmen', from an era where flamboyantly shameless promotion and mass media gimmicks were the norm to sell one of these 'event' pictures.

I used to work for the NZ office of Warner Bros. from the late 1970's for several years and I can remember the huge and often outrageous publicity campaigns orchestrated by the production sales department in Burbank in order to promote these sorts of films.  The pressbooks alone were jam packed with often ludicrous gimmicks that would even put a shonky used car salesman's dubious modus operandi to shame,  Some of Irwin's latter films such as BEYOND THE POSEIDON ADVENTURE and WHEN TIME RAN OUT were tired excuses for a night at the movies, with even the distributors and exhibitors realising that Irwin-esque box office magic had in fact had it's day. 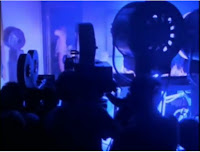 THE TOWERING INFERNO, the tale of a disastrous fire on opening night in the world's tallest (fictional) building in San Francisco, - the 138 story Glass Tower - was indeed a box office smash and I vividly remember seeing it on the huge screen at Auckland's Cinerama theatre back on it's initial run.  The mighty Cinerama (long gone to sadly be replaced with an awful, characterless, 'modern' and ultimately failed muliplex, which has also been mothballed, and not a moment too soon) was the gig for all of the big films, usually at Christmas Holiday period which is our peak movie release time in this part of the world in which only the most worthwhile movies in terms of guaranteed seat filling-queue around the block cinematic events. 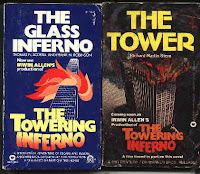 Not one but two separate novels - The Glass Inferno and The Tower -  provided the basis for THE TOWERING INFERNO screenplay.  If that weren't enough, not one but two major studios joined forces to produce the film - 20th Century Fox and Warner Bros, each of whom were racing to get their own burning skyscraper epic off the drawing board - with the former providing studio space and soundstage facilities and the latter handling worldwide distribution.  I don't know if Warners provided any studio production space.  Some $15 million was spent on this film (double that of competitor Universal's modestly budgeted EARTHQUAKE that same year). THE TOWERING INFERNO certainly had the look of a hefty price tag affair when viewed up on the big screen. Kudos belong to Production Designer William Creber and co-Directors of Photography Fred Koenekamp and Joseph Biroc for the great look and texture of the film. 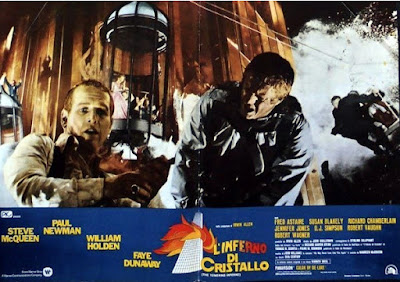 I was, and remain, a sucker for 70's disaster movies.  I saw 'em all back in the day and eagerly awaited the next one.  Some were good and some were pretty bad.  I loved TOWERING INFERNO then and have seen it countless times since and I'd still regard it as one of, if not the best from the genre.  Tight helmsmanship from director John Guillermin maintained a good pace and surprisingly fast clip for a two and a half hour plus feature.  Producer Irwin Allen co-directed, handling all of the action set pieces, with the finished result not for a moment suggestive of alternate directors.  The disaster genre was generally prone to stock characters, sugary sub-plots and 'oh give me a break' back stories, though to it's credit this film generally manages to keep that flotsam and jetsam to a relative minimum with any extraneous fluff quickly overtaken with scenes of frighteningly intense peril, fire fighting and rescue.  I loved the fact that the fire fighting stuff was totally real and closely guided by actual fire rescue people, much as another disaster film a few years later, AIRPORT 77 did with a knuckle biting ocean rescue carried out on screen largely by the actual Coast Guard and US Navy utilising real procedures and personnel.

The casting can make or break any film as we know, with INFERNO's cast being great.  Leads Paul Newman and Steve McQueen were superstars and perfectly cast, with the often under-rated McQueen in particular being superb.  I recall the promotional materials for the film very specifically spelling out just how these two top stars must be billed on all advertising as both felt they deserved top billing.  Very explicit memos from Warners head office dictated Newman's name exactly the same size as McQueen's but Steve's billing first to the left and Paul's billing second but slightly higher up (thus before McQueen's credit in effect ... or not?) by precise measure on all the ad art and one sheets than Steve!  A veritable megastar pissing contest me thinks.

Other key cast members were the always excellent William Holden and a most loathsome Richard Chamberlain - each in strong roles - and the glamourous Faye Dunaway, somewhat under utilised as a flimsy sort of love interest with not a lot to do aside from look cute.  Interestingly, Dunaway had a run of great films in the 70's with the sensational thriller THREE DAYS OF THE CONDOR and the utterly brilliant blacker than black satire NETWORK (co-starring again with William Holden in definitive career best performances for both actors) being two of my all time favourites, though as usual, I digress. 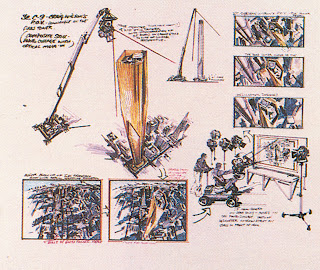 Many other name stars also feature such as Fred Astaire and Robert Wagner.  Supporting cast are also good with even a certain now notorious O.J Simpson carrying his thespian weight rather well.  He ain't no Orson Welles but he did okay.  Established character actor Don Gordon - long time pal and costar of Steve McQueen is on board as are Dabney Coleman and one of my fave 70's support players Felton Perry (great in Clint Eastwood's MAGNUM FORCE as well as a particular guilty favourite of mine, the ass kicking, jive talking, revenge blaxploitation cheapie SUDDEN DEATH with Robert Conrad... a real hoot and then some! ... there I go digressing yet again)

The special visual effects naturally play a large part in the film's success, with longtime Irwin Allen collaborator L.B 'Bill' Abbott being an essential member of the production team.  Lenwood Ballard Abbott had been in the motion picture business since the late 1920's as an assistant cameraman and would go on to have a life long career at 20th Century Fox as special effects cinematographer under Fred Sersen, Ralph Hammeras and Ray Kellogg.  Bill would work on hundreds of films, eventually assuming the headship of the effects department in 1957 when Kellogg left to pursue a career in direction and 2nd unit work.  Abbott would stay with Fox until they closed down their effects department, at which time he would freelance on many pictures.  Among his key credits were his Oscar winning work on TORA!, TORA!, TORA!, JOURNEY TO THE CENTRE OF THE EARTH and LOGAN'S RUN.  Bill was a four time Oscar winner for best visual effects, though oddly TOWERING INFERNO wasn't in the running. 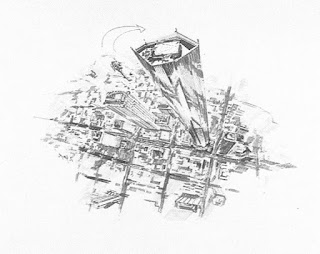 The other vital member of the production was Oscar winning mechanical effects man A.D Flowers.  A.D, whose actual name was Adlia Douglas Flowers, was another old time veteran with a career dating back to the late 1930's at Metro Goldwyn Mayer where he worked as part of A.Arnold Gillespie's special effects department on such classics as THE WIZARD OF OZ, 30 SECONDS OVER TOKYO, GREEN DOLPHIN STREET and many more.  Later achievements would include such films as THE GODFATHER and the gargantuan project that was APOCALYPSE NOW.  Some of Flowers' finest work can be seen in Steven Spielberg's 1941 where he would work with frequent associate Logan Frazee devising and constructing remarkable wire rigged aerial miniature dogfights and various other sequences which would see Flowers nominated for best special effects.  For the whole rundown on the phenomenal trick work in 1941, click here to view my extensive article.

Other technical staff included matte artist Matthew Yuricich who'd already had a long association with Bill Abbott from their days together at Fox through the early 1950's under Fred Sersen.  For such a big film the number of matte paintings required were relatively small.  In addition, Abbott hired another old Fox effects associate, optical cinematographer Frank Van der Veer to assemble the numerous blue screen composite shots. For the full story on Matt Yuricich's fascinating life and film career, check out my exclusive oral history from the man himself by clicking here.

So, let us take a look at one of most successful and memorable event films from the 1970's.