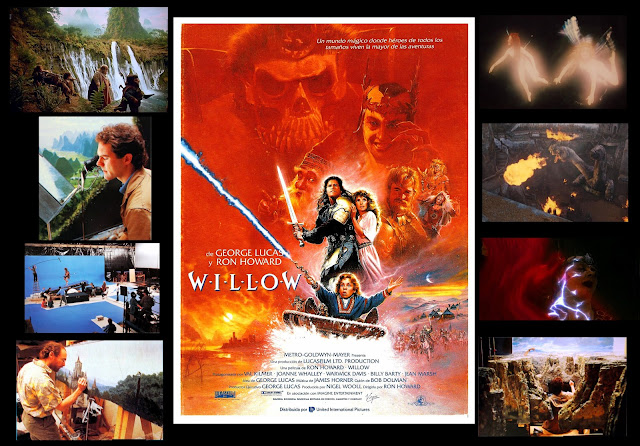 A warm hello to my regular followers and the ever growing numbers of special effects fans who are still discovering NZPetes Matte Shot.  Today I'll be covering the 1988 George Lucas-Ron Howard picture WILLOW, one of the most spectacular visual effects showcases that emerged during the final phase of the traditional hand made special effects era - an era where stunning vistas were conjured up by being painted on glass; elaborate in camera multi-plane gags were created through careful planning, pragmatic solutions and a great deal of old fashioned camera knowhow; where dazzling set pieces were assembled element by element, negative by negative on the optical printer in such complex, time consuming and often exhaustive, unforgiving fashion that would most likely leave a modern day CG compositor quaking in his boots.  The film was loaded with all manner of magical trick shots - some old and some new - and I'd regard it as among the finest work delivered by Industrial Light & Magic.

The 1980's was an exciting time for many effects fans as we eagerly awaited the next ILM project, or movie that just happened to have that effects house as an a contributor, often with little regard for the film itself.  Industrial Light & Magic were at the top of their game throughout the decade with, for this fan at least, an enviable expertise in the fields of matte art, miniatures and cel animated effects in particular, which thrilled me then and still do so now.

The 1980's would see a number of similarly themed family pictures such as LABYRINTH, THE DARK CRYSTAL,  LucasFilm's own pair of EWOK made for television features to name but a few shows.  For my money the 1988 film WILLOW is by far the best of the bunch as far as this genre goes, due in no small part to the fresh helmsmanship of director Ron Howard, the most agreeable Warwick Davis as our title character and above all else a wonderful 'English sensitivity' in the overall flavour and texture of the narrative - an important factor that can only be a strong positive factor in such fantasy storytelling. 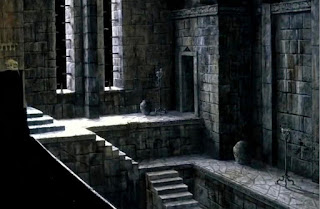 WILLOW was a large budget fantasy tale that producer George Lucas had been wanting to put into production for some years.  The story of a band of merry little adventurers in a mythical land who are tasked with arranging the safe passage of a special infant in order to put a stop to the sneering wickedness of the thoroughly vile Queen Bavmorda, and told in a very Tolkien-esque fashion.  Filming took place on diverse locations such as here in New Zealand, Wales and at Elstree Studios outside of London, as well as some pick up shots made during post production in California.

The mammoth trick shot roster on WILLOW where over 350 visual effects were required would necessitate no fewer than three overall Visual Effects Supervisors: Dennis Muren, Phil Tippett and Michael McAlister, with ILM veteran Christopher Evans as Matte Painting Supervisor. Each were tasked with overseeing their own effects sequences which were divided up among the supervisors into specialised fields such as Tippett supervised the stop/go motion creature sequences, Muren taking on the ethereal fairy sequences and groundbreaking transformation shots, and McAlister having the substantial load of  some 170 so called 'Brownie' shots - photographing and compositing eight inch tall elf like forest folk into life size settings and action sequences via blue screen travelling matte photography and complicated pin block techniques to allow maximum freedom in compositing.

I tend to deal mostly with matte artistry in this blog as my regular readers will know, but on occasion I branch out to include other visual effects techniques when I find it important enough and relevant.  WILLOW is one such motion picture and as such I'll begin with a detailed look at the mattes, followed below by many examples and explanations of the optical, cel animation and go-motion effects techniques employed on the film. Ya' can't say you ever get short changed by NZPete! 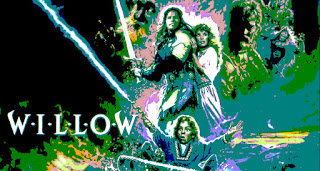 WILLOW would receive an Oscar nomination for Best Special Visual Effects in 1988 along side the dynamite Bruce Willis actioner DIE HARD and the largely animated WHO FRAMED ROGER RABBIT, with the bunny cartoon-noir snapping up the FX Oscar unfortunately as I feel WILLOW really deserved it (and don't even get me started on BLADERUNNER losing out to that bug-eyed E.T in the effects category a few years earlier... is there no justice in the world?) , but I guess ROGER RABBIT was a bigger hit and ain't that how it works?  I mentioned this to Matte Supervisor Christopher Evans and he too felt somewhat disappointed at the outcome that year.

So, without further ado, let's take a pleasant journey to a land far, far away, of little people, even littler forest folk, rather fetching fairies and their drop dead gorgeous fairy queen, a wicked old hag with a pandora's box bursting with nastiness and a two headed dragon ........... oh, and some nice New Zealand scenery.

*In preparing this retrospective I am most grateful to former ILM Supervising Matte Artist Chris Evans for his reminiscences, technical explanations and photographic material pertaining to WILLOW's many wonderful matte shots.


As Chief Matte Artist on WILLOW my job was to provide Director Ron Howard with a series of matte shots establishing the look of the make-believe world in which the action takes place.
To create the thirty shots I worked closely with Director of Matte Photography Craig Barron, Optical Supervisor John Ellis, some four Matte Artists - Caroleen Green, Michael Pangrazio, Sean Joyce and Paul Swendsen - in addition to model makers, animators, effects editors and the production staff at Industrial Light and Magic.  We began designing shots in September 1987 and delivered finals in April 1988.

The primary challenge with a fantasy film like WILLOW is to design matte shots that fulfil the Director's imaginative vision of the picture with unusual and breathtaking scenes which do not, however, call attention to themselves as paintings.  The shots needed to match locations in New Zealand and Wales, and enhance the scope of the live action as filmed on sets at Elstree Studios in the United Kingdom.  A sense of mood and epic scale was provided at key points, as in the montage of Willow's journey through enchanted lands and his arrival at the ominous castle of the evil Queen Barmorda.  Such full screen, daytime panoramas are very difficult to paint convincingly and demanded the utmost artistic skill from myself and the other artists. 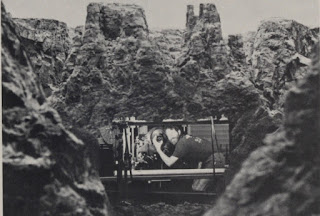 Various traditional and innovative photographic techniques were used including latent image and optical compositing.  Wherever possible, camera movement was introduced.  To create the boom shot of the canyon maze, the live action area was rear projected into a low-relief painting surrounded by a multiplane miniature set and photographed with a motion control camera system.

A new technique pioneered at the ILM Matte Department was the double-exposing of a matte painting over an exposure of a miniature set, so that the two images are blended together at the artist's discretion.  Combining the details and textures of a miniature with the perspective and atmospheric lighting of a painting would bring a new dimension of realism to the matte shot - as in the scenes of the Queen's castle - and I believe set a new standard for the effects industry in this area. 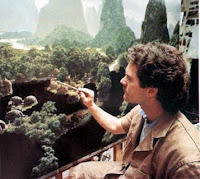 By creating convincing illusions of a fantastic, yet believable world of make-believe, I know the matte paintings contributed greatly to the look and feel of WILLOW.  Ultimately, the success of these shots was the result of the dedication and artistic and technical excellence shared by the team who had worked closely together producing matte painting effects on over twenty-one motion pictures.  It was a privilege to lead this group in creating these matte shots for WILLOW. 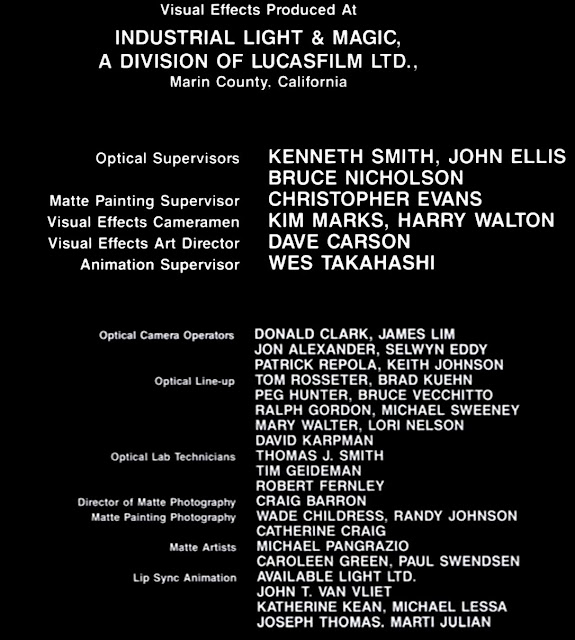