MATTES ON THE MOVE

MATTES ON THE MOVE: 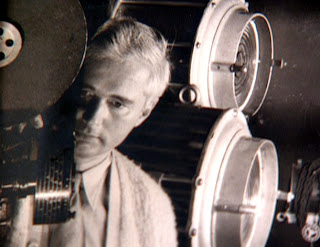 Before embarking on this latest blog please allow me to take some time to bring to the attention of the readers out there, who share like minded interests in movie magic from days gone by, a particularly wonderful photographic effects documentary unlike any other I’ve seen.
The name Herman Schultheis in all probability means little to the majority of effects fans – certainly to me, aside from a brief page in a recent superb coffee table book, Setting The Scene on Disney  background animation art with some amazing pictures of his multiplane scenic effects for PINOCCHIO.  Well, as it turns out, Herman was Walt Disney’s hidden and uncredited fx wizard in residence throughout the forties and into the fifties with, among other achievements, were the phenomenal special photographic effects creations for FANTASIA .  In the realm of jaw dropping effects animation Disney led the pack, with the aforementioned animated feature still able to blow the minds of fans and newcomers alike. 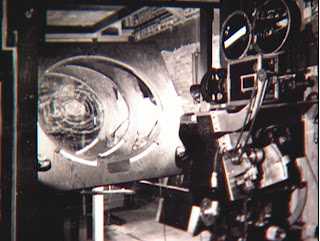 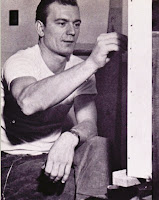 The other news is that, by way of the generous negotiating and a fair bit of ‘shoe leather’ of fx boys Craig Barron and Peter Anderson, I’ve managed to interview the one and only Matthew Yuricich.  Matt is in all likelihood the last surviving painter from the Golden Era, with a huge body of work – much of it uncredited - stretching from 1951 through to the mid nineties, having worked with notable characters such as Fred Sersen, Warren Newcombe, Clarence Slifer, Ray Kellogg, Emil Kosa and Rocco Gioffre.  I was holding off on the latest blog in hopes of presenting Matthew’s interview but it’s not ready yet so I’ll pencil that in for next blog. 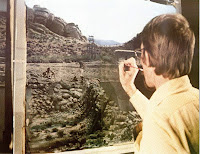 If all that weren't enough, I'm very happy to report that I've been having discussions with matte artist, stop motion animator and all round visual effects man Jim Danforth with the result being an upcoming and comprehensive interview with Jim on his extensive matte painting career.  Much has been written elsewhere on Jim's iconic stop motion work so I'm thrilled to in a position to open up Jim's memory vault on his many glass painting assignments (and more) ranging from the early sixties through to the late nineties.  Watch this space! 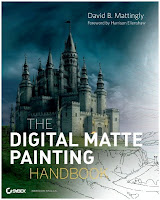 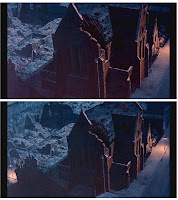 
Traditionally painted and photographed matte shots have, out of necessity, tended to be largely locked off and stationary affairs with only especially demanding film makers and bold photographic effects men tackling the artistic and technical challenges of pulling off a ‘mobile’ matte shot. 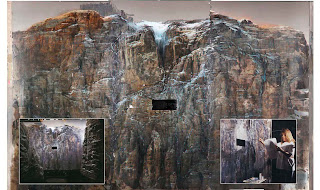 Occasionally simple tilts and pans were quite easily accomplished  with the foreground glass art and a nodal head tripod mount.  20th Century Fox’s Fred Sersen utilized this method in the 20's, as did many other practitioners.  The in camera latent image composite provided immediate results and best of all by passed any secondary laboratory degredation which was in general, unavoidable in achieving pseudo camera moves on an optical printer.

Early pioneers in the field were Jack Cosgrove and Clarence Slifer who in the late thirties designed and carried out astonishingly ambitious epic pull back multi element composites for Selznick’s GONE WITH THE WIND (1939) – and in glorious 3 strip Technicolor to boot!   That very same year RKO produced their own impressive pull out matte comp of Charles Laughton atop the storied Parisian cathedral for the closing shot of THE HUNCHBACK OF NOTRE DAME by integrating miniature rear projection into matte art under visual effects director Vernon Walker. 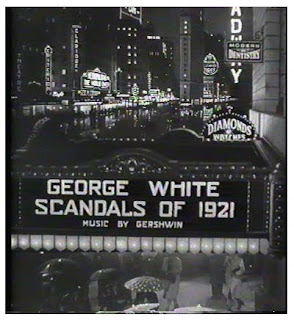 By the mid forties Clarence Slifer and Jack Cosgrove had developed a rudimentary motorised pan and tilt head which permitted exacting and repeatable camera moves both on set and while shooting the subsequent matte painting later.  Shown above left is the Slifer camera effects team at Selznick International in 1947.  From left to right: machinist Oscar Jarosch, effects cameraman Clarence Slifer, matte painter Jack Shaw, camera assistant Harold Griggs, matte painters Spencer Bagtatopoulis and Hans Ledeboer and lastly camera operator Owen Marsh.  In front of Slifer is the somewhat crude, yet effective pulley driven set up which facilitated difficult camera moves on the optical printer for films such as DUEL IN THE SUN.  For the rest of his career Slifer would re-invent and continually develop his beloved optical printers in an effort to lift matte shots out of their static place. 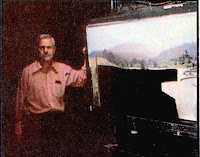 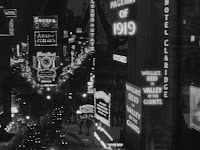 While some studios, in particular Warner Brothers and Selznick, were gung ho about breaking the static matte out of it’s ‘locked off’ traditions, others like Universal and Paramount for example seemed resistant and as far as I could observe remained pretty conservative, all the more surprising given that John Fulton was well known for thinking ‘outside the square’ and exploring all manner of special effects techniques..


The 1940’s saw the motion matte more and more utilized, with one studio in particular leading the field by a country mile.  The Warner Bros gold standard special effects department, known as Stage Five, was a giant in the industry where by all accounts almost anything could be achieved by her vast and highly creative team.  Of all the motion mattes I’ve researched for this article, none come close to those accomplished by Warners in terms of sheer guts and daring.  Classic pictures such as YANKEE DOODLE DANDY,  THE ADVENTURES OF MARK TWAIN, THE FOUNTAINHEAD and CASABLANCA are some of the Warner films which feature show stopping 'motion action' mattes as I term them – often a complex, carefully engineered montage of  painted matte art, live action, process projected elements, photo cut outs, miniatures and effects animation all integrated into an apparently seemless camera move.  No other studio to my knowledge came close as this one under special effects directors Byron Haskin, Lawrence Butler, William McGann and Edwin DuPar. 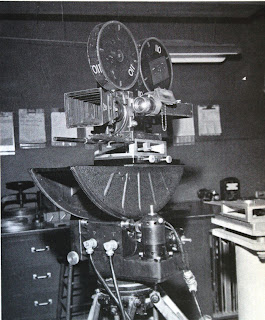 In the late forties a few studios, notably Paramount and MGM respectively, simultaneously developed prototype motion repeater camera mounts whereby very simple axis mechanized tilts and pans recorded on a punch tape system could be accurately repeated when photographing both the matte art, or in some cases, a miniature set and the live action on set.  Paramount first used their Stancliff Motion Repeater on the Cecil B.DeMille epic SAMSON AND DELILAH (1949), though the shot in question was a miniature collapsing temple with fleeing extras added via density traveling mattes.  Effects chief Gordon Jennings and his cinematographer Wallace Kelly assembled the sequence with a fairly minor tilt up to good effect.  Strangely, the studio never seemed to utilize the technology very often from my observations, with very few ‘once in a blue moon’ applications over the years. Above left is director Cecil B.DeMille with inventor Stancliffe and his motion repeater. The picture at right is a close up of the special mechanised nodal motion head. 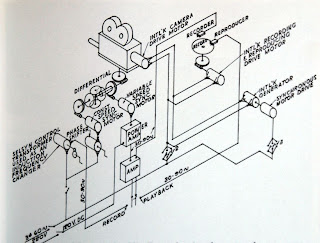 Over at MGM the matte department under Warren Newcombe and Mark Davis had a similar device in the works – the Dupy Duplicator - developed by MGM sound engineer Olin Dupy, which as far as I know did the same thing as the Paramount version.  Metro first used theirs on the Fred Astaire musical EASTER PARADE the same year as the Paramount picture.  At left is a schematic of Olin Dupy's device. 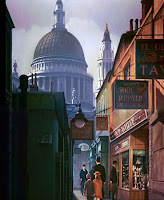 Over time innovators such as visual effects cinematographers Clarence Slifer, Linwood Dunn and British photographic effects man Wally Veevers would design and construct specialized camera devices of their own to achieve astonishing camera moves within painted matte art, with each of these three gentlemen producing first rate work on DUEL IN THE SUN, MIGHTY JOE YOUNG and THE COLDITZ STORY respectively.
Slifer deserves standout credit for many remarkable aerial image motion shots during his later tenure at MGM on such epics as MUTINY ON THE BOUNTY , THE GREATEST STORY EVER TOLD and THE UNSINKABLE MOLLY BROWN among others.
At left is one of Peter Ellenshaw's tilt downs from MARY POPPINS (1964). 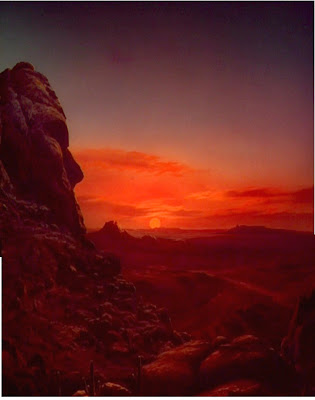 Wally Veevers was also responsible for designing and constructing the repeater equipment (built in his home garage I believe) for both 2001: A SPACE ODDYSEY and THE BATTLE OF BRITAIN – though the former didn’t use any matte paintings at all, only miniatures and photographic cut outs, while the latter utilised Wally's system for multiplane photo cut outs on glass for squadrons of fighter planes - in both cases to outstanding effect.

Later developments by the next generation of visual effects men such as Douglas Trumbull, John Dykstra and a few others would utilize advanced and more flexible variations on the basic motion repeater for the resurgence of the big effects extravaganzas of the late 70’s onward, though for the most part the technology would be designed for miniature work as opposed to matte art.  A few exceptions being the Disney studio, where Harrison Ellenshaw would use an automated system, Matte Scan, for some of the spectacular matte painted panoramas on THE BLACK HOLE (1979).  Disney would later take the device a step further and unleash Matte Scan Mark II, which was used extensively on films like DICK TRACY. 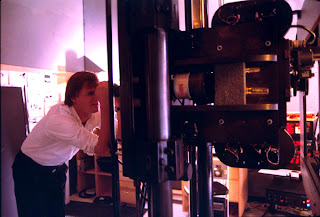 Industrial Light and Magic developed their own AutoMatte camera in the nineteen eighties for implementing camera moves within their painted matte composites.  I asked former ILM director of matte photography Craig Barron about this equipment (seen at left):  "On THE EMPIRE STRIKES BACK Harrison Ellenshaw was the Matte Department head and showed us his reel from THE BLACK HOLE that had a lot of remarkable matte work with a moving camera – he had helped develop the Matte Scan camera at Disney. Richard Edlund seized upon this as a capability we needed in our ILM matte department as well – the ability to do big multiplane matte shots using motion control – the idea was to have it ready in time for the next Star Wars movie RETURN OF THE JEDI.

"Our system was called the Automatte and would be even more capable than Matte Scan with a motion control camera that utilized a fifty-foot camera track. The camera could roll with motion control and allowed you to change movements for Vistavision or conventional 4 perf. We had a special anamorphic lens built by David Grafton that was a “one of a kind” lens - it added the anamorphic “squeeze” progressively through the optics – it was in effect “distortion free” when tracking over matte painting artwork". 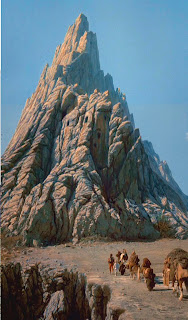 "Every axis on the Automatte was facilitated with computerized motion control X, Y, Z and roll movement, on a 50 foot track. Also, there were two easels to hold the matte paintings (up to 4 by 8 ft) also fully motion controlled in X, Y and Z. Finally there was a Vistavision or conventional 4 perf rear projector – later we put the rear projector on the track to make it fully motion control in X, Y and Z as well".
"The Automatte was a thing of beauty in it’s own way – repeatable in every axis to a very high degree of precision – much higher than other motion camera systems of it’s day. I don’t know what happened to it as I left ILM before the digital age took over. I did come across the Grafton lens at the ILM/Kerner bankruptcy auction and tried to buy it but was outbid".


Well folks, what follows are a sizable number of matte moves - some subtle and others staggering.  I hope you enjoy them.