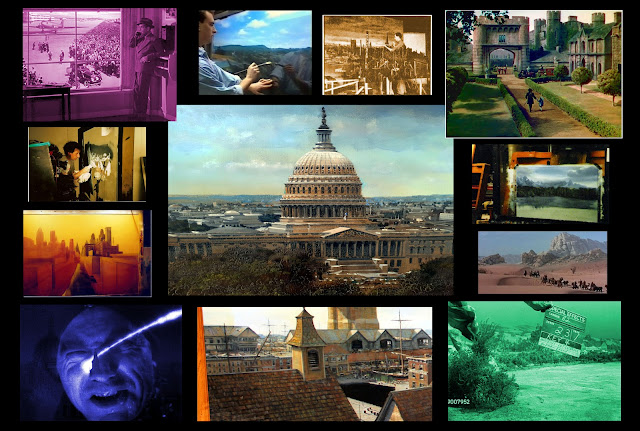 Welcome back to yet another installment of New Zealand Pete's tribute blog to old school special visual effects and the masters of that particular form of cinematic magic.  I've assembled a fascinating collection of effects shots from a broad spectrum of motion pictures, with more than a few surprises.  As per the norm, I've included some well known, a few not so well known, and at least one completely off the wall celluloid oddity that I bet most readers will, in all likelihood, never have heard of, let alone actually seen.  In addition to the analysis of five movies, I'm also delighted to finally showcase a recently auctioned Al Whitlock matte painting in detail, as well as a review of two most deserving coffee table books that I purchased recently.  No space for another 'Blast From The Past', but next issue I'll have some cool stuff.
Do give me your feedback, comments, corrections, gossip or tips on movies worth tracking down that I may have missed (I generally watch 3 or 4 per night, which is fine as I'm retired and don't need to get up at the crack of dawn to be a part of the rank and file traffic misery that is rush hour in Auckland.) 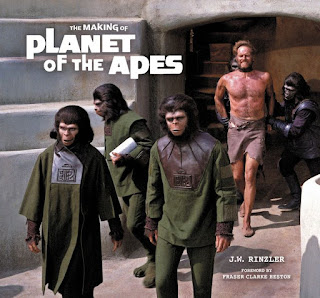 The American author J.W Rinzler has published several essential and sizable volumes on the original Lucasfilm STAR WARS trilogy which occupy pride and place on my sagging bookshelves, such is the remarkable attention to detail, deep investigative journalism and utterly splendid photographic archival material - particularly with regard to the first STAR WARS book, A NEW HOPE - a re-readable tome if ever there was one.  I recently purchased two more of Rinzler's magnificent books - THE MAKING OF PLANET OF THE APES and just last week, was delighted to open a weighty package from Amazon, UK containing Rinzler's most recent book, THE MAKING OF ALIEN. 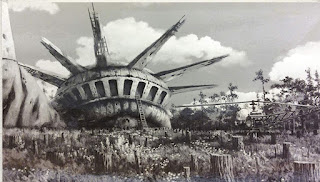 Both films are in my all time top list, right near the top, so it was with great haste that I order and devour these books A.S.A.P.  I was not in the least disappointed with either purchase.  The APES volume I received and read a few months back, while I'm about halfway through the newly unwrapped ALIEN edition.
I've never tired of viewing the original 1968 PLANET OF THE APES film, and so vividly recall seeing it on the big screen, probably around 1970.  A most literate, intelligent and thought provoking film that was a hell of a gamble for the studio, and for most associated with it.  So much of the film still resonates with me, even all these years, and countless viewings later, with of course the 'kick in the guts' tag scene of the Liberty Lady buried in the sand being a jaw dropping moment that ranks right up there among the greatest 'reveals' in cinema history.  In saying that, there was another particular brief scene that shot a bolt through me as a kid in the movie house audience (the suburban Mayfair Cinema, Auckland), and that was the very first shot of one of the apes on horseback right after that skin crawling screech heard from an off camera shell horn up in the trees. 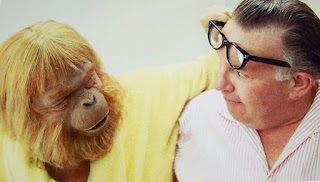 Riders dressed entirely in black chase the primitive human folk through the corn field... we can't quite make out who or what the pursuers are until one stops and turns toward camera, with a zoom in to reveal an ape!  Cut to Charlton Heston in disbelief! Might not read as much nowadays but it rattled me no end as a kid. It still gives me a shiver even today some 50 years later. Rinzler covers every aspect of the production and leaves no stone unturned, from the casting - my fave being the wonderful Maurice Evans who steals the show hands down - to Bill Abbott's low key visual effects (I always admired the opening shot outside the spacecraft windows); John Chambers' groundbreaking make up design and of course, the incredible experimental percussion score by the great Jerry Goldsmith. Oh, and as an addendum, the one thing I never liked was the 'cheap' looking Ape City, where a matte painting really could have been employed to extend the small exterior set and create something resembling a 'city' rather than the quaint little styrofoam village that it appears to be on screen.  Just my opinion.
A fabulous read, very well researched and illustrated. 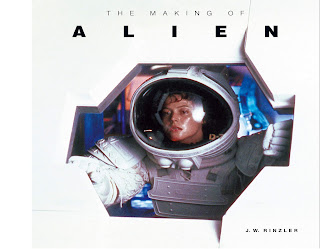 In my opinion, director Ridley Scott has never topped his remarkable achievement that was ALIEN, and it's plain author Rinzler shares the sentiment.  As with his previous books, no aspect of the surprisingly lengthy and tangled journey - from Dan O'Bannon's initial idea; the largely under-credited Walter Hill's major script revisions; the utter revulsion by 'The Suits' at Fox toward eccentric Swiss surrealist H.R Giger's conceptual artwork; the hiring of an unknown English director who'd only helmed one previous 'arthouse' feature with every director in town turning the project down as, in the words of one, "a piece of shit monster movie".  Finally one studio executive (Alan Ladd jnr) was willing to risk his reputation and green-light the film. 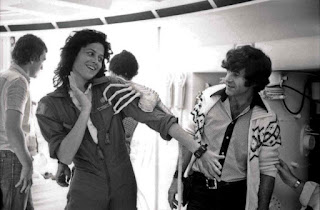 I've lost count of the number of times I've seen the film, dating right back to an advance industry preview in 1979 which blew my socks off, to the umpteenth look on BluRay the other day, the film never fails to deliver on every single front, even 40 years down the track.  Terrific screenwriting complimented by a superb ensemble cast, all of whom were the very definition of perfection playing characters that were real people (I especially admired Ian Holm's 'Ash', and Veronica Cartwright's 'Lambert' - just so bloody good...but then they all were!).  Brilliant art direction (where was that God-damned Oscar I ask you?), cinematography, music, the very deliberate slow-burn pacing that just 'tightens the screws' ever so gradually till it's almost unbearable (Brett's demise...now was there ever a more nerve wracking build up to a death scene, ever? All that dripping water and jangling chains.  Genius Ridley.) and the most ghastly screen incarnation of sheer, unrelenting pulse pounding terror that was the title creature itself.
It all worked because Ridley knew just how much (if anything) of the creature to show, and exactly when it would work to heart stopping perfection. 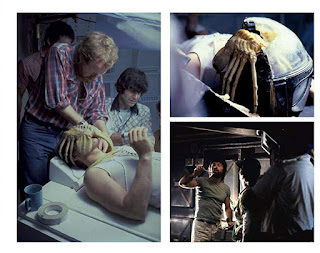 As a big fan of movie sound effects, I'd easily rank ALIEN as one of the best ever for sound fx editing (by Jim Shields) and this area too is covered in depth in the book along with all of the creative departments, not forgetting Brian Johnson and Nick Allder's Oscar winning visual effects, which never outstayed their welcome and were used sparingly, unlike films of this current vogue, unfortunately.
Both books, as with the previous Rinzler 'Making Of' volumes are substantial 350 page, large landscape format, heavily illustrated, quality hardcover publications that I highly recommend to anyone who shares my love for these two iconic science fiction films.

[Footnote:  The James Cameron sequel ALIENS may well be an all out action packed rollercoaster ride, but it completely lacked any form of empathy for it's human characters - one simply can't wait for them to be wiped out, as obnoxious, cliched and one dimensional as they all were - due to Cameron's curious inability to 'direct' actors and contribute believable dialogue exchanges, an unfortunate and inexplicable reality that's sadly all too evident when his subsequent films are also viewed. But that's just my observation]

It's not very often that any of Albert's mattes come up for auction, but three did recently, and as much as I'd love to be the happy owner of any of them (I'm not!), a friend in Germany managed to purchase one major piece, with the added bonus of having another matte painting on the reverse side, which my pal wasn't aware of until the enormous crate arrived and was opened.  The paintings come from the estate of Larry Shuler who, as mentioned in my earlier Whitlock career blog, was Al's grip for many, many years, dating from the early 1960's.  Larry, who passed away earlier this year owned half a dozen wonderful paintings, with his daughter sending me snapshots of them all gracing his walls.
My pal in Germany was thrilled, not only to be the proud owner of these superb pieces, but to actually receive the carefully boxed up shipment in one, unbroken piece, especially given that we're talking about massive glass matte art.  This makes three original Whitlock's and a dozen vintage MGM mattes now in his collection.
*A very big 'thank you' Thomas, for sharing these and other images with me.  It's much appreciated, and I know at least one MatteShot reader will be delighted (I'm talking to you Steve).


Interestingly, the particular auction house appeared to have absolutely no idea as to what they were marketing, nor who Whitlock was, the basic concept of a matte painting, nor even any of the film titles!  The AIRPORT one was simply described as 'Cityscape by Albert Whitlock' (!!!) 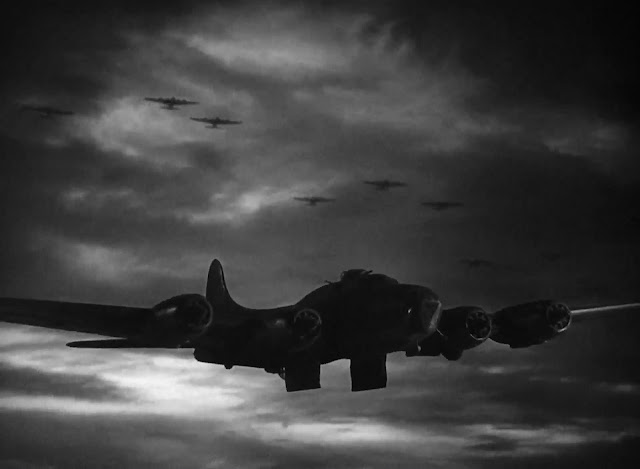 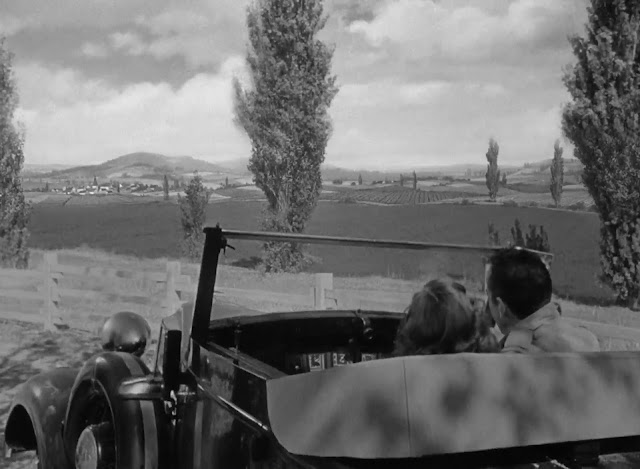 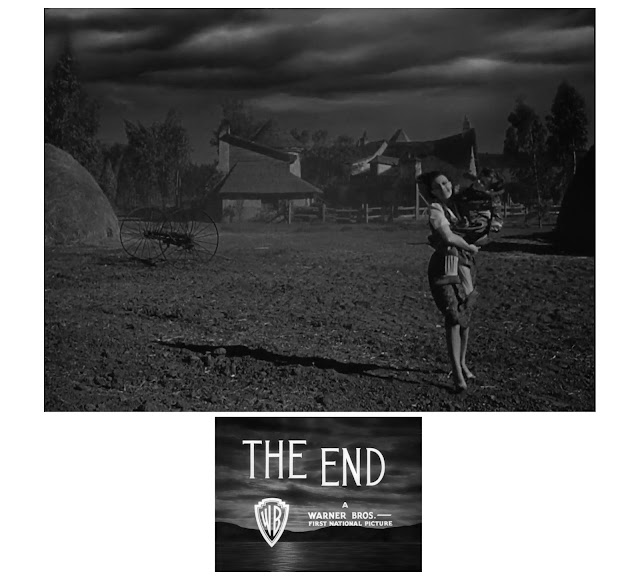 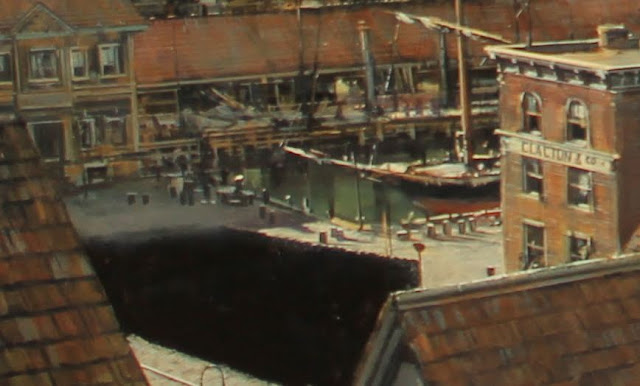 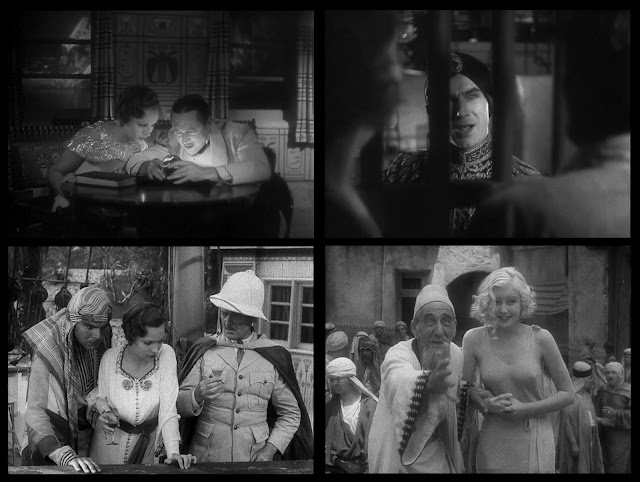 That's about it for this installment.  Catch you all next month...