THE LOST MATTES OF RUSSELL LAWSON 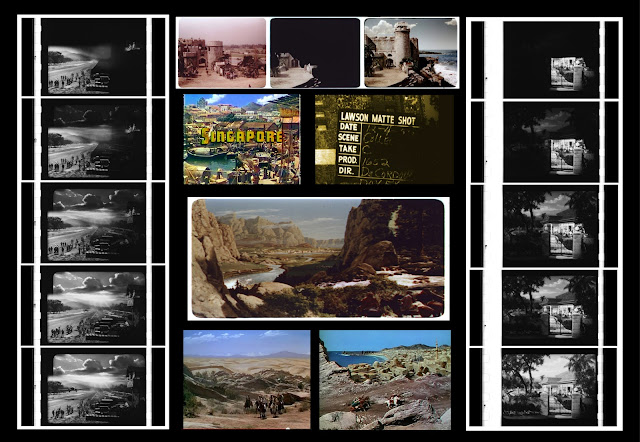 Hi there fellow enthusiasts of that marvellous, magical and utterly beguiling lost artform of traditional matte painting and old school trick photography.  It's that time once again for NZ Pete to unwrap another parcel of ingenious and often amazing hand painted motion picture processes from the photo-chemical era, or as my friend Mark Wolf would say, "B.C - before computers".

In this, the final article for 2021 (and maybe for good given the state of the world as it stands at present) I want to delve into an exciting treasure chest of never before seen goodies that I'm quite confident will enthrall many of my regular readers, and most likely a few irregular readers as well(!)

The bulk of today's blog post covers the lost 35mm sample reels of old Russ Lawson matte shots that had been hidden away in storage since the late 1950's.  There are some fantastic before and after shots in this exceedingly rare collection of Universal Studios oldies, which for this fan, is pure heaven.

In addition to the old Lawson showreels, I've also including a few other gems as well, such as a look at the consumate visual effects professionalism that was matte artist Geoffrey Dickinson - an integral part of the small yet much loved British movie studio, Ealing.  As if that weren't enough, I've also recovered another 'lost' matte shot, this being an Albert Whitlock shot that wasn't used in SHIP OF FOOLS.  Finally, I've come across a pair of interesting before and after mattes also painted at Universal for the first George Lucas EWOK telemovie that just happened to be tacked onto the end of one of the aforementioned sample reels.

Oh, and in closing...  As you know I received a crate load of wonderful original mattes recently.  I'm told that another of my fellow New Zealand countrymen also ordered a sizeable shipment, though just who, I don't know.  If you happen to be a reader of Matte Shot, I'd love to know what marvellous paintings you acquired.  My guess would be a certain film maker of those grand Tolkien epics, who has a massive private museum of Hollywood props, artwork, vfx artifacts and so on.

***This post, and all 173 previous blogs known as 'Matte Shot', were originally created by Peter Cook for nzpetesmatteshot, with all content, layout and text originally published at http://nzpetesmatteshot.blogspot.com/

RESCUED FROM THE CUTTING ROOM FLOOR:

A few months back I did an extensive article on the vfx for the Stanley Kramer film SHIP OF FOOLS (1965), and illustrated for the first time, the original Albert Whitlock mattes - painted in colour as in fact they were for what was a black & white film.  One particular matte painting stood apart, as I could never find a matching scene in the film to correspond it with.  The mystery is now solved, as the matte was indeed composited and finished, though evidentally fell victim to the editor's scissors.  I'm happy to report that glorious deleted shot, though unused, can now be seen and appreciated.

On the matte painting side of things, the pioneering Norman Dawn - pretty much regarded by most in the business as the inventor of the motion picture matte shot - was Universal's matte expert in the very early days and conjured up many amazing shots and tricks.  British born artist Conrad Tritschler, I believe, was engaged for a time painting mattes (most likely for the original Bela Lugosi DRACULA and others), and somewhere in the early part of the thirties both Jack Cosgrove and Russell Lawson teamed up as resident in-house matte painters.  Jack departed in the mid thirties for David Selznick's up and coming studio and never looked back. A few years later future Production Designer John DeCuir came on board as a young apprentice in Lawson's department and painted many mattes with Russ, off and on, between 1939 and 1946.  DeCuir's son told me some great stories about his father working for Lawson:  "As the story goes Russ took John under his wing. Russ managed up John's skills from illustrator into matte artist. John told me his first assignment from Russ I recall he said his first day at work, Russ came in and dropped a huge rock on his desk - dirt, shit and leaves flying in all directions and said "paint this", when I can't tell if it's a photograph or not we will go on to painting clouds, and then Russ went up on the roof to take his lunch time-nap. After rocks Russ told him to paint the clouds outside his window. He was about to quit when he got his first real glass matte to paint.  As Russ's roof top naps got longer, Dad found himself running the department and would have stayed there except he went into the Navy (WW2) about 1941-44. - After the war he came back to Universal as an art department illustrator and he rest was/is history."
As is well known, the Universal matte department would eventually pass from Russell to Albert Whitlock around 1962 or so.  What isn't well known is the fact that both Russ and Albert worked together for a time.  Al's long time friend and associate, Syd Dutton, kindly shared some history of the events, as told to him by Albert.  "Albert and Russ did work together briefly, but I don’t know if it was on Taras Bulba, but the time line suggests it could have been. I’ll watch the film and give you my impression if there were two hands working on the matte shots."
"Al told me that he had struck a deal with Universal, but under the condition he wasn’t supervised. Russ started to critique a painting of Al’s and Al shot back that Russ wasn’t his supervisor. Russ, so the story went, said “We’ll see about that!” and stormed off. After seeing the powers that be, he returned and said that Al was correct. It must have been a frosty relationship."
"Al said that not long after, the owner of a bar across the street from Universal died and left the establishment to Russ, who was his best patron and friend. Russ came into the painting studio with his new found wealth and said to Al, “It’s all yours!”…..and that was that."
Finally, I've never been able to track down any photo's of Lawson, unfortunately.  John DeCuir's son told me recently he still has a large storage box of old Universal matte department memorabilia from the 1940's, including before and after 35mm frames - many being of the various Arabian Nights genre pictures - and photographs of matte paintings.  I had hoped to see some of this wonderful material to flesh out this blog piece, but sadly, nothing came of it.
So then, here are the lost mattes from the old sample reels.  Some are pretty ordinary, some are really good, and a few are jaw dropping.  I do hope you enjoy them.


(1944) directed by Robert Siodmak, which had other similar mattes involving railway settings and lookalike actress.  *Noteworthy as a taut film to watch actually, as it crossed the censorship boundary of the time with the wonderful character actor Elisha Cook jnr (no relation) portraying one of the screen's most perversely creepy, deviants ever - positively oozing with sleaze, which may have had audiences choking in their popcorn back in the day!  Ya' heard it here first!!  ;)

What follows are a sizeable selection of some of the other matte shots carried out by Russell throughout his very long career at Universal.  As one would expect, there are a number of memorable mattes from the numerous science fiction and horror pictures that served as Universal's profitable bread and butter throughout the decades, beginning in the early 1930's through to the late fifties.  As mentioned, Russ teamed up with the legendary Jack Cosgrove in the early few years at Universal and for a time at Columbia as well as a couple of so-called Poverty Row establishments in Hollywood.  After a couple of years Cosgrove moved to Selznick International, where he and cameraman Clarence Slifer set up the much acclaimed matte and photographic effects department.  Russ would remain at Universal for the remainder of his career, working closely with studio effects cinematographer Roswell Hoffman.  The only actual screen credit Russell would gain was for the big budget TARAS BULBA shortly before his retirement.

In an email I received from the son of John DeCuir, who as mentioned, worked with Russ for several years, he stated:  "We too are digging through the archives and recently came up with a wonderful collection of 35mm bi-pack camera test strips from those Russ Lawson Universal days (mattes dad was painting for Russ). The film strips are short only three to six frames. They seem to be in pretty good shape - the subject matter was mostly Arabian Nights but more detective work is required to ID the actual film(s). I am sure you would be able to help there. When time permits I will get the strips scanned and we can share the detective work. We also have some B&W prints of the half-black half-painted glasses."

I'm hopeful that these will become available at some point and shared on a future blog.

Before we say goodbye to 2021, here are a couple of interesting shots that were found on one of the sample reels.  These are Syd Dutton mattes that were done at Universal in 1984 for the Lucasfilm telemovie THE EWOK ADVENTURE-CARAVAN OF COURAGE.  The film and it's follow up were both ILM affairs but I assume the workload was too great so they farmed out a couple of shots to Universal and also to Jim Danforth.  Take a look at these...

***This post, and all 173 previous blogs known as 'Matte Shot', were originally created by Peter Cook for nzpetesmatteshot, with all content, layout and text originally published at http://nzpetesmatteshot.blogspot.com/
Well friends, that's about it for this substantial installment.  I look forward to your feedback.  Judging from last month's posting, the magnificent Anita Ekberg is proving more popular than most matte exponents that I've covered(!!) ... And rightly so, says I.   ;)
Take care wherever you are.
Pete