I’ve had my fair share of technical problems with Google’s ‘Blogger’ over the past year, and things seem to be going from bad to worse with today’s blog article nearly shelved indefinitely due to serious failings with the godamned ‘Blogger’ whereby it’s now become next to impossible to remain ‘logged in’ while preparing blogs (a problem many furious bloggers around the globe seem to be stuck with it would appear!).  For the past several days the system will log out every few minutes or sometimes seconds with this cryptic dialogue box: “you have been logged out by other place-do you wish to log in again?”  Talk about bloody infuriating.  It makes me want to pull my hair out!  I might have to reduce blogs both in number, size and frequency as this situation is next to impossible to work with.  I’ll see if things resolve themselves, fingers crossed.  If the blog goes 'silent', you'll know why!   :( 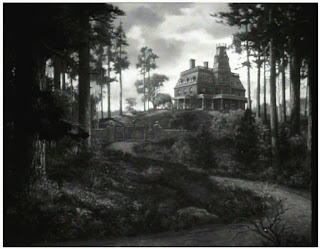 Today's blog is one I've been hanging onto for a while.  Among the broad range of matte art subject matter one has always appealed to me - that being the 'haunted house' or gothic mansion as depicted in traditional matte art.  While some classics are represented here in ‘glass shot’ form a number of equally chilling classic gothic homestead settings from films such as Robert Wise’s classic spine tingler THE HAUNTING (1963), Richard Matheson’s excellent LEGEND OF HELL HOUSE (1973), Peter Medak’s THE CHANGELING (1979) and Kubrick’s THE SHINING (1980) don’t make it as those wonderful settings were either actual locations, or as in the case of the excellent George C.Scott frightfest THE CHANGELING, a full size purpose built exterior façade.  Some effectively menacing more recent demonic street addresses such as the under rated remake of HOUSE ON HAUNTED HILL  (1999) I’ve deliberately not included as the digital realm falls outside the scope (and interest) of this blog.

Although I've packed quite a number of interesting shots into today's blog I've not managed to find anywhere near the variety of 1940's gothic mattes I'd like to have, though happily, before looking at the vintage glass shots and fascinating frames from years gone by I've been most fortunate, thanks to visual effects man Harry Walton,  to demonstrate in step  by step fashion the actual preparation, photography and compositing of just such a shot, which Harry produced in the 1970's while at Cascade Films.  I'm most grateful (again) to Harry for his time in dragging out his old photo album and taking the time to send me not only the images but excellent blow by blow technical detail and reminiscences.  So before the tribute to glass shots of old, here's a close look at Harry's 'Alcazar' matte in the making.....

PHOTOGRAPHIC FX 101 - THE MAKING OF A MATTE

"I originally painted this castle in 1976 as a fine art piece. This is an original negative matte shot but there is a strange story behind this shot - this was the first painting that I ever did. The painting is oil on a 30"x40" masonite panel. As a young kid I loved those moody castle shots on the sea shore in those early great Roger Corman/Vincent Price "POE" movies. Till this day I still love matte shots with castles. So one day I decided to do this castle painting as a fine art piece with the cliffs and water all painted and with no intention of this being a filmed matte shot".

"When I started work at CPC in 1978 (still at Cascade's Stage 6 effects facility) I wanted to set up a matte department and do a matte shot (from the remnants of Stage 6's matte stand) and Roy Seawright agreed. Since this was an internal test project I tried to be efficient as possible using existing resources whenever possible. So I decided to use my Alcazar castle painting that I did 2 years earlier and I also wanted to do this as an original negative composite".

"So the weird part is, is that I had to engineer the shot in reverse! I had to find a location that would reasonably fit the painting that I had already done. Being a California surfer for 15 years I had some pretty good ideas of beach locations with protruding cliffs".

"Spending a couple Saturdays I scouted some locations and found the best place in Laguna Beach which I took some reference photos of. There was a structure on this cliff, a large condominium or apartment, which made physical sense to replace it with my castle".


"Back at the CPC/Cascade matte department I set up my painting on the matte stand and filmed some overexposed clips of the painting with my matte camera. These 'thin' overexposed 35mm film clips will later be mounted in the viewing tube film clip holder of the Mitchell plate camera for line up at the location. So I and the matte crew (David Stipes, Mike Griffin and Bill Stromberg?) loaded up the equipment and headed for Laguna beach".

"I remember it being a hard walk on this long flight of stairs down to the sand carrying all this heavy equipment. With the clip of the castle in the camera I found the best position on the beach where the castle fit best on the rocks. The glass was set up on the sand, braced and draped with black douvateen. I then proceeded to lay out the matte with black tape matting out the castle area, painted sky and partially through the cliffs which of course was matting out the real sky and condominium. I then shot a lot of takes for dip tests and final compositing. Since the painting was a night shot I wanted to simulate that as much as possible when shooting the live action which was during broad daylight. I think I shot the live action about 2 stops underexposed with a steel blue filter in the camera’s filter slot".

"Back at the CPC/Cascade matte department it was almost standard operating procedure for matching the painting to the live action. I found the best exposure of the painting to overall match the luminance of the live action and then made painting adjustments in the cliff area and where the sky met the live horizon.  I timed the color and density of the final prints from the lab to further push the day shot to a night scene. Unfortunately the perspectives of the castle don't fit the live shot but it was fun for all involved and I got the  procedures worked out and the matte department set up for future work".


THIS BLOG HAS BEEN ONE HELL OF AN ORDEAL, WITH THE NON STOP "LOG OUTS" AND SUCH.  IT'S TAKEN A HELL OF A LOT OF PATIENCE AND REALLY FOUL CUSS WORDS IN COMPLETING THIS ARTICLE. I'LL HAVE A BREAK FOR A WHILE IN THE HOPE THAT THE GOOGLE EMPIRE WILL RECTIFY THE TECHNICAL PROBLEMS AS IT'S JUST TOO BLOODY DIFFICULT WORKING AROUND THESE INCESSANT "LOG OUTS".