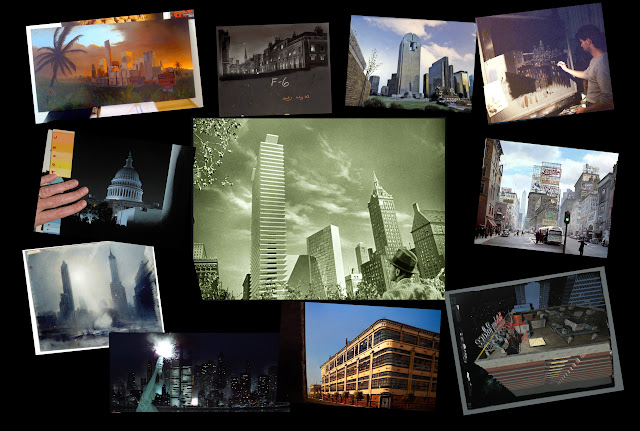 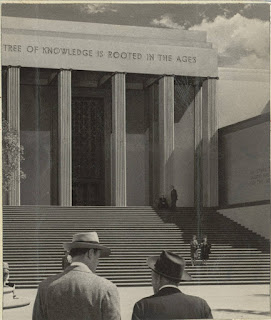 Greetings friends and fellow matte painting fanatics, it's well and truly time to clutter up internet servers and bog down your data usage as NZPete enthralls you with yet another mammoth entry in this eye opening cinematic artform.  This month I have put together what I hope will be a fascinating and comprehensive look at the urban landscape and associated architecture that traditional era matte artists have created, often without us, the audience, being any the wiser.  I've assembled a large selection of matte shots - some of which you might have seen and a great many of which have not been illustrated until now - the result of which I've split this article into two parts to accomodate it all.
I had originally included historic urban views as well but have pulled those aside to include in an upcoming blog tentatively titled Great Moments in World History According to the Matte Artist.  Some great stuff to be had there folks. 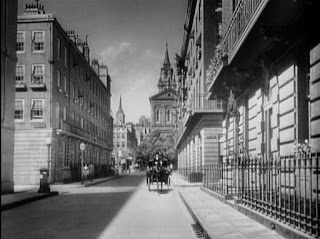 I've always had something of an amateur interest in 'painted' architecture, in particular the more classic, traditional variety, so there is a healthy collection of such matte shots featured below amid the more avant garde and modernist constructions. Classical fine painters such as the Italian master Canaletto still leave me in awe with his draftsmanship and precision in perspective (I especially love the masterpieces rendered during his English period, though as usual I digress...).  As far as the films illustrated here today, matte painters from all of the Hollywood studios as well as their British counterparts are included, though as is often the case, so many of the fine mattes from the Golden Era are sadly anonymous as far as authorship goes, with sometimes as many as 8 to 12 individual painters employed at any one time at some of the big studio matte departments such as 20th Century Fox, MGM and Warner Bros., especially during the heyday of 1940's.  I've been more successful at pinning down the individuals responsible in much later years as the studios trimmed their effects departments down to just one or two painters. 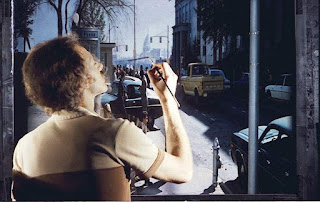 Among the works displayed below - and in the subsequent follow up article - are some beautifully rendered pastel 'paintings' from MGM who were at the top of the game when it came to architectural draftsmanship and incredible fine detail, often all for just 2 or 3 seconds of screen time, or sometimes none at all as it wasn't at all uncommon for mattes to be dropped during editing.  Matthew Yuricich stated in his oral history which I published in 2012 that Metro Goldwyn Mayer had it all.  As well as a choice roster of some of the finest illustrators in the country, Newcombe's matte department had their own layout man - Bill Meyer - who's job it was to do all of the often difficult draftsmanship prior to the painter becoming involved that was needed to make the matte artist's job easier.

Some of the old time Golden Era artists represented here are Norman Dawn, Howard Fisher, Lee LeBlanc, Jack Rabin, Ray Kellogg,  Russ Lawson, Paul Detlefsen and Mario Larrinaga.  Also featured are some examples from Albert Whitlock, Les Bowie, Cliff Cully, Ray Caple, Peter & Harrison Ellenshaw among others.  Among the latter day matte exponents covered here today are notable talents such as Rocco Gioffre, Mark Sullivan, Syd Dutton, Michele Moen, Richard Kilroy, Paul Lasaine, Caroleen Green and of course, Ken Marschall.  I'm especially grateful to Ken for sharing even more of his fantastic matte art and behind the scenes pictures for this two part blog.  So, read on and enjoy some more of that particular brand of cinematic wizardry that is in a world of it's own. 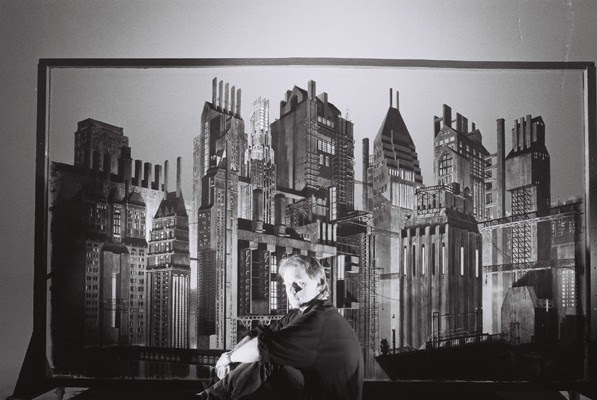 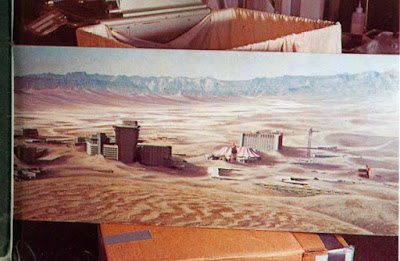 Well folks, that's about it for this edition.  I still have a few hundred more on this topic so I'll be back with Part 2 before you can say NZPete's Matte Shot.