A Matter of Perspective

A MATTER OF PERSPECTIVE

It’s that time again whereby I unleash yet another of my favourite sub-genre’s of matte artistry – that being  the art of the painted perspective, though before I embark upon that I must draw my readers’ attention to a new blog on matte art which has arrived on the web.  Though the blog may be new the man behind it has in fact been an active and authoritative researcher and collector on the topic for many years.  Madrid based special effects technician and author Domingo Lizcano has, for well over a decade, run his exhaustively thorough Art in Movies website (link at right) – a site that I have often made mention of in my own writings. 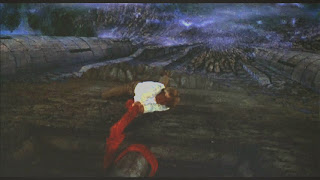 By Domingo’s own admission Art in Movies was becoming a little too cluttered and tricky to navigate, leading it’s author no choice other than to seriously reconstruct same as a larger, easier journey for those interested to embark on it’s myriad of treasures hidden within.  I’ve had a look at some of the new, as yet unreleased format and it’s very impressive indeed.  In the mean time Domingo has set up the aforementioned blog Movie Matte Painting (see link at right) whereby he has assembled some rarely seen (mostly new to me) matte magic from obscure European and Russian cinema as well as little seen small epics from some US production houses.  Domingo really knows his stuff, and has been of great help to me with any of the non US or UK matte art shows I’ve profiled with his friendship and work with noted effects icons such as the great Emilio Ruiz del Rio and others proving vital. 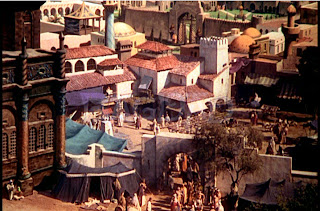 Before proceeding with today’s blog I must draw attention to a mystery which has baffled SFX scholars for decades which I alluded to in my last article on Ray Harryhausen – that being the true provenance of that Middle Eastern city matte shot in THE 7th VOYAGE OF SINBAD.  Well, thanks once again to my pal Domingo’s tireless detective work it can now be confirmed that the shot in question (which even Harryhausen himself had long lost track of) is from the Universal costumer THE VEIL OF BAGDAD (1953) starring Victor Mature and most likely the work of resident matte artist Russell Lawsen.  You’d be surprised how many of Ray’s fans, friends and supporters around the world have found this nugget of info the Holy Grail of trick shot heritage.  Thanks again Domingo!

So…here we are with A MATTER OF PERSPECTIVE .  So, what’s it all about I hear you say?  As any artist knows, the mastery of perspective in draftsmanship is essential, and many magnificent classicists such as Canaletto’s Venitian and London works and a particular favourite of mine being Louis Daguerre’s masterpiece Ruins of The Chapel at Holyrood by Moonlight.
Perspective work in the realms of matte art is essential to realistically tie the elements together and can be the first dead giveaway to the audience when it doesn’t work as it should.  Of course there are those extreme shots where a normalised perspective must, out of necessity, be exaggerated for dramatic effect – more often than not to simulate a unusually wide lens and choice of camera position as dictated by the director. 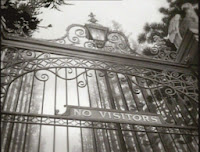 These shots I find incredibly exciting and a joy to behold.  They weren’t all that common in the era of traditional matte work and appear more and more nowadays in the newer CG stylised over the top school of film making.  Those shots and films fall outside of the scope (and interest) of NZPete’s blog, though I have included a few extreme miniature shots here to compliment the matte work.

In putting this collection together I’ve covered the gamut of fairly ‘standardised’ mattes with beautifully realised vanishing points such as street views  and suchlike which I like very much, right the way through to vertigo inducing downview mattes which, being afraid of heights myself,  make my hair stand on end!  There are even a few outright wacky perspective matte shots that may not appeal to all but delight your editor/author no end.  I know some of these shots have appeared in previous blogs of mine, but some are so bloody good and fully interchangeable they belong here too.

I’d like to extend my thanks to matte artist Richard Kilroy for providing me with some wonderful, rare material here and also to my pal Domingo Lizcano for several last minute add ons I’d never seen before that thrilled me considerably.
So, with that wordy pre-amble let us take a look at some beautifully realised and imaginative examples of THE ART OF PERSPECTIVE.
Enjoy