Ray Harryhausen's Fantastical Land's Beyond Beyond: A Tribute 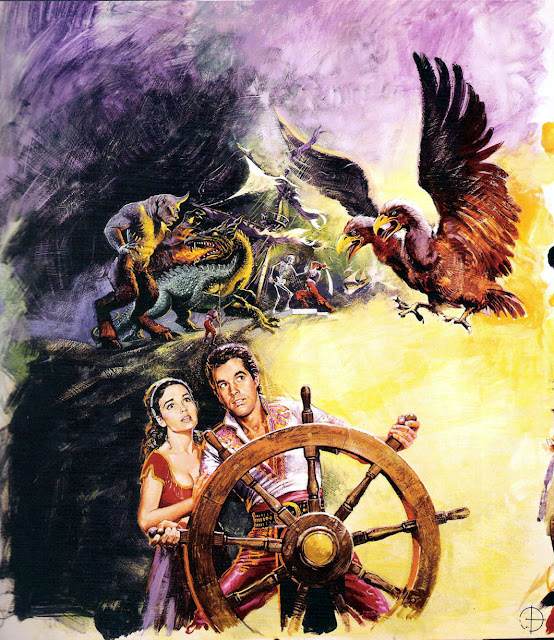 While I was preparing the latest post A MATTER OF PERSPECTIVE, I, along with countless film enthusiasts around the globe heard the sad news on May 7 of the passing of a true legend  - the great, inimitable Ray Harryhausen.  It goes without saying that we’d most likely be hard pressed to think of another figure of similar status within the realms of trick cinematography and fully blown fantasy escapism as was Ray’s place in the medium.  Multitudes of film makers and visual effects people – both seasoned professionals such as Peter Jackson, Joe Dante and George Lucas and amateur Super 8 kids alike owe so much to Ray and his long time producer and friend Charles H.Schneer.  You made us the fans we are today. 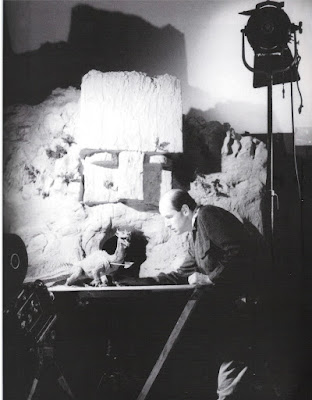 I’ve been a lifelong enthusiast of Ray’s work and his films with, I guess, VALLEY OF GWANGI being my first exposure to the Harryhausen world on the big theatre screen on it’s initial release.  Naturally, I was blown away by the entire ‘headtrip’ and admit to more than a few nightmares associated with the sights of chewed, bloodied cowboys and sundry citizens being shaken and spat out by the very frightening meat eater of the title.  I was hooked!  Very little in the way of stop motion and all out effects showcases were available at the time in the late 60’s.  It would be years before any of those shows ever showed up on our single channel state broadcaster NZBC – with the elusive landmark picture KING KONG still several years away as a first run television ‘event’.

I vividly recall the thrill of seeing Saturday matinee double features with JASON AND THE ARGONAUTS, more often than not paired up with some utterly incompatible companion film such as Charles Bronson’s Mexican prison break actioner BREAKOUT (one of his best by the way).  I also recall some years later seeing JASON again on an equally mismatched double bill (I think it was with Steve McQueen’s BULLITT that time!!), though this time being shocked at the state of the 35mm print, which had turned pink and was barely holding together with none too subtle splices, rendering bizarre jump cuts in dialogue and action, with characters suddenly vanishing out of frame with an ill timed ‘pop’ and important bits missing. 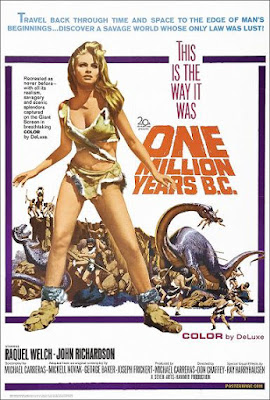 As was the case then, the print was an ‘Island Print’ – that is, one supplied by the NZ distributor (whom I’d later work for) to various Pacific nations such as Fiji and Samoa, whereby the prints would typically be thrashed to death through misuse and projection gates which hadn’t seen a cleaning in 15 years.  You had to see these prints to believe it.  Scary tropical insects squashed onto frames of film and gigantic ‘X marks the spot’ gouged in cue marks that even a blindman could see!  Jesus!   I laugh today as my projectionist son had a fit if a splice appeared in a 35mm print – with a fine‘railway track’ green scratch being sufficient to evoke a nervous breakdown.

Anyway… as usual I digress.  What I intend to do here today is to pay a tribute to the various non-animation effects shots featured in Ray’s films.  This isn’t meant to neglect the creatures and wonderful hands on stop motion we’ve all come to know and love, but as with the true flavour of this blog I’ll be concentrating upon mattes, miniatures and opticals – all of which played an important part in bringing those fantasy tales to life, and which themselves have been all too often overlooked.  Those obsessed mainly with monsters and dinosaurs please understand. 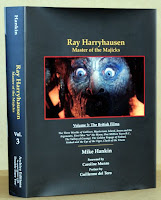 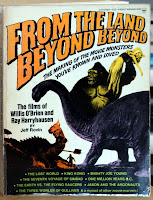 There are a great many fine publications out there dedicated to, and sometimes written by, Ray himself.  The most important one being the astonishing MASTER OF THE MAJICKS series by Mike Hankin.  Although I only have book three (The British Films) I simply cannot speak highly enough of this titanic endeavour.  Never has a book on such a specialised subject been as comprehensive, exhaustive and just plain perfect as this.  A staggering achievement that should be on the bookshelves of all special visual effects fans the world over.  Other excellent books out there are Ray’s old FILM FANTASY SCRAPBOOK, RAY HARRYHAUSEN: AN ANIMATED LIFE and the excellent Jeff Rovin book FROM THE LAND BEYOND BEYOND which is especially good and a most worthy work should you be lucky enough to find a copy. 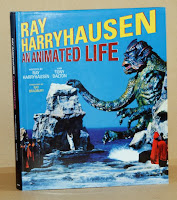 So, what about Harryhausen’s films?  Here’s a rundown of some noteworthy entries.  Well, I love several, like some others a lot and find a couple incredibly dull.  SEVENTH VOYAGE OF SINBAD is almost as good as it gets, with tight, compact running time and barely a frame wasted.  Beautiful animation and the absolute best score out of any of Ray’s pictures, by the legendary Bernard Herrmann.  Bernie’s pounding opening theme set to the Columbia logo and those hand painted titles still thrills me no end. Of note, Herrmann’s theme for the skeleton fight remains a unique pleasure, with inventive use of percussion resembling the clattering of bones – the likes of which I’ve not heard before nor since.

I still have a pristine 16mm print of the film and long before the advent of home video I’d thrill friends and family with this show.  Kathryn Grant was very easy on the eye – a fact not lost on your then adolescent blogger.
THE GOLDEN VOYAGE OF SINBAD is possibly my favourite film overall, despite it being shrugged off by many for inexplicaple reasons.  Good script, a great Sinbad (John Philip Law), beautifully atmospheric fx art direction and, what I personally believe to be Ray’s best stop motion work.  Many great set pieces, but the six armed Kali is my favourite among them.  Tom Baker makes a wonderfully convincing villain and Maurice Jarre's score stands more than comfortably on it's own merits.  Terrific show which blew my mind on the very large cinema screen of the long deceased movie palace The Embassy, here in Auckland back in 73 or 74.   I, along with thousands of other adolescents were mesmerised from start to finish.  It was a big hit too as I recall.

JASON AND THE ARGONAUTS is another fave with NZPete (and millions of others it seems).  It takes a while to get going but just keeps improving as it moves along.  Talos was amazing and naturally the climactic skeleton army set piece was unforgettable (Ray’s single best sequence in itself) though it would have been ten times better in moonlight, though I believe even this daytime sequence raised the eyebrows and wrath of censors in various territories such as the UK. The shots inside the treasure vault are still a delight for this viewer. 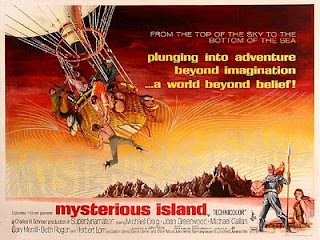 MYSTERIOUS ISLAND was a highly entertaining adventure with a lot going for it and is an all out great movie, again with a wonderful Bernard Herrmann score and a lot of special photographic effects work outside of the creatures..  One of the few films of Harryhausen’s to use matte art to any significant degree, with Ray typically preferring to stick with miniatures and so forth instead.  Variable matte paintings from great to less so, with some being full frame matte shots.  The film was notable for it’s outstanding miniature work of the Nautilus grotto and superb sodium backing travelling matte shots, which are especially good. 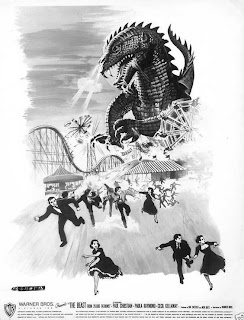 VALLEY OF GWANGI started it all for me.  A plodding, though ultimately rewarding adventure with the miniature horse stop motion effects being the best of the lot. The budgets and schedules of all of Ray’s films were tight at best, with very little time or money available for tests and second takes.  A side effect of this unfortunate regime were the all too frequent occurances of stop motion creatures suddenly taking on different hues in some shots.  This is no more evident than in GWANGI sadly as the poor beast alternates between purple, green, grey, blue in as many cuts, which even as a kid I was mystified by.  I know Ray cringed at this regrettable anomaly, especially in this film where it’s at it’s worst.

H.G Wells' FIRST MEN IN THE MOON was a brave departure from the norm for the Charles H.Schneer organisation.  A genuinely interesting premise that hooks the viewer right from word "go" and had probably a record number of effects shots of various type, oddly with stop motion being the least of those.


Both THE BEAST FROM 20’000 FATHOMS and 20 MILLION MILES TO EARTH rank highly on my Harryhausen meter, both in terms of narrative and also technical execution – with the latter being impressive indeed with it’s better than usual Dynarama combinations that still look great, and make later efforts such as the dismal SINBAD AND THE EYE OF THE TIGER and disappointing CLASH OF THE TITANS look poor indeed.

So with that, here’s a collection of special photographic effects shots from many of those, and other Harryhausen films that have supported the myriad of creatures, giants, dinosaurs and suchlike.