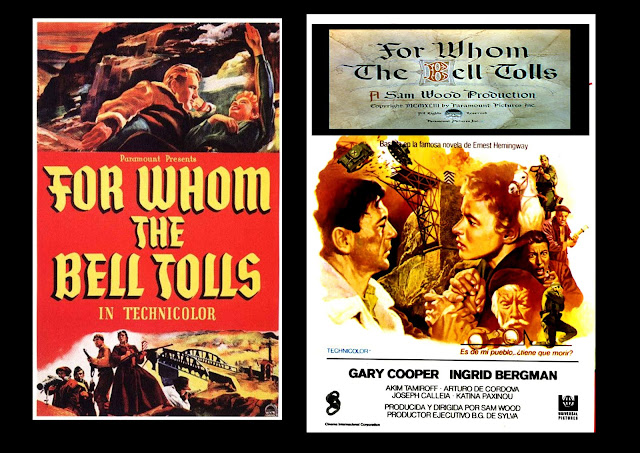 In this, the second part in my series examining a number of motion pictures overlooked and in many cases largely unknown to today's generation of multi-plex weened film audiences, we will be taking a look at the special photographic effects work from one of the biggest films of 1943, Sam Wood's FOR WHOM THE BELL TOLLS.  While the film itself is well known - based upon the immensely popular story of partisan fighters in the Spanish Civil War by Ernest Hemingway - and was a huge hit with audiences at the time, the technical aspects of the movie probably slipped by most fans of the film.  The three million dollar epic was headlined by two of Hollywood's greats, Gary Cooper and Ingrid Bergman - both favourite actors of mine though I feel quite miscast in this instance.
Personally speaking, although I've never really read any of Hemingway's prose aside from something back in high school in the mid 70's, pretty much every motion picture adaptation of a Hemingway story has left me cold.  I simply don't get the guy. As popular as he was - and still is no doubt - that Hemingway headspace, mindset and especially his use of the English language (at least in the many movies I've seen over the years based upon his writings) in getting his narrative across remains completely lost on me ... period.  Generally, films based upon Hemingway's works are, for me, interminable and very much an acquired taste.

A huge film in all respects, not least in it's mammoth near three hour running time, FWTBT was a very big visual effects showcase for Paramount's trickshot department headed by Gordon Jennings, with dozens of matte painted shots required to transform the Californian Sonora locations into 1930's period Spain with numerous miniatures utilised in the action sequences and often times split screened into painting/live action combination shots. While the many visual effects were generally effective and well integrated, the back projection shots tended to let the show down considerably, with process shots in general in most pictures rarely ever coming off with any degree of success when filmed in Technicolor at the time, despite the advances with high intensity illumination and multiple band projection.  It would be many years until colour rear projection shots would look acceptable.

Paramount's special effects department had had a number of chiefs over the years, with Roy Pomeroy, Oren 'Bob' Roberts and Farciot Edouart running things at various times before Gordon Jennings took over the role in 1933.  Gordon started in the industry as an assistant cameraman in 1919 before eventually shifting into trick photography.  Jennings would hold that post for twenty years until his sudden and untimely death in 1953 during a game of golf soon after completing the arduous effects work on George Pal's WAR OF THE WORLDS, from whence Paramount's visual effects would then be under the management of John P. Fulton.  The big, soft spoken Jennings was much liked by his close knit team at Paramount and would be the recipient of three Academy Awards and was lined up to provide visuals on Cecil B. DeMille's epic THE TEN COMMANDMENTS - and was widely known as DeMille's favourite trick shot man - but fate stepped in and it sadly wasn't to be.
Gordon's older brother Devereaux Jennings had also joined the Paramount effects department in 1933 as VFX cinematographer and would work alongside his brother on many films for the next 19 years, shooting miniatures mostly.

Irmin Roberts was another key member of the photographic effects unit, having joined the studio in 1926 working off and on with his brother Oren, who for a time was head of the department.  With expertise in effects and matte photography, Irmin worked on hundreds of pictures made by the studio such as SPAWN OF THE NORTH for which he earned an Academy Award for it's special effects in 1938, FRENCHMAN'S CREEK (see further below), WAR OF THE WORLDS and THE TEN COMMANDMENTS to name but a few.  Late in his Paramount tenure Irmin would be ace 2nd unit cinematographer on memorable films such as the 1953 hit film SHANE where Oscar winning D.O.P Loyal Griggs stated in his awards ceremony acceptance speech that the statuette really belonged as much to Irmin Roberts for his wonderful 2nd unit photography.  Roberts also invented several photographic effects procedures, one of which has become a mainstay even to this day in mostly thriller type pictures, the so called 'Vertigo' shot (dolly out while very carefully zooming in) distorted reality viewpoint that Hitchcock  dazzled audiences with in VERTIGO and Spielberg used brilliantly in JAWS many years later. Irmin would continue behind the camera for what would be a very long career, culminating in 2nd unit work in AIRPORT and effects camerawork for L.B Abbott and Ray Kellogg on TORA! TORA! TORA in 1970 which deservedly won the best visual effects Oscar that year.


Matte painter Jan Domela (the 'Jan' is pronounced 'yawn') hailed originally from Holland and like long time associate Irmin Roberts would have a very long career in matte work, having joined Paramount around 1927 and remaining with the studio through to the early 1960's when they closed down their special effects department.  Domela painted mattes for literally hundreds of films and tv shows, principally for Paramount, though later assignments in the 1960's would see Jan freelanced at MGM, 20th Century Fox, Columbia and Film Effects of Hollywood on a wide variety of projects from epics such as THE AGONY AND THE ECSTACY through to smaller things like THE MAN FROM UNCLE television series.
Jan gradually got into the movie business after meeting fellow Hollander Hans Ledeboer while painting at the Panama Pacific Expo of 1915 in San Francisco.  Ledeboer would go on to become a movie scenic artist and matte painter at several studios such as Paramount and later Selznick International.


As far as I know, Domela, by and large, painted virtually all of the matte work for Paramount single handedly, though noted artist and close friend Chesley Bonestell did work with Domela in the 1950's on at least two George Pal pictures providing mainly astronomical matte art.  Future art director Al Nozaki was also, for a time, employed in Paramount's matte department.  According to Jan's daughter Johanna, Jan tried to organise a training scheme for apprentice matte artists in the 1950's but the notoriously tight fisted studio wouldn't hear of it and he even attempted some weekend training off his own bat but it didn't take off.  Jan certainly had his workload cut out for him with this picture, with some of the mattes looking, understandably, quite rushed.

Miniaturist Ivyl Burks was another longtime Paramount effects staffer, though I have no real details as to when he started.  Burks was certainly active through the 1940's and 50's.  Burks would provide excellent miniatures for THE BRIDGES AT TOKO-RI, SAMSON AND DELILAH, WAR OF THE WORLDS, WHEN WORLDS COLLIDE and one of my all time favourite effects films, the sorely under rated Byron Haskin ants-on-the-rampage adventure THE NAKED JUNGLE - an 'A' Grade effects show if ever there was one - to name a few.  Other model makers at Paramount were Art Smith and Harry Reynolds, though these men worked on the lot in the 1930's and may not have been active in subsequent decades.


The studio's process department was run by Farciot Edouart who was at one point actually in charge of the entire special effects department.  Early in his career Edouart dabbled in glass shots as well as early variations upon rear screen projection.  Farciot made numerous developments to the science of process projection including multi-strip projection rigs with dual or even triple screens to good effect, at least when used in black & white pictures such as I WANTED WINGS which saw Edouart receive the visual effects Oscar (shown at left receiving 1941 VFX Oscar from Darryl F. Zanuck) for his highly creative application of process and gimballed, highly mobile fighter planes that swoop and dive with very realistic results.  Really impressive stuff even now. Edouart knocked out some great process shots in his time, with probably the last being seen in SHIP OF FOOLS.  Unfortunately, process projection of the 30's through to the 50's was more often than not a dismal failure when it came to colour, with washed out plates, inexcusable hot-spots and colour mismatch - though this wasn't a problem unique to Farciot's unit at Paramount and was a common liability across the industry.  Travelling mattes may have had fringe or bleed through issues at times but at least the elements were crisp and controlled when compared with bad back projected process .

Edouart was yet another long-stay career employee of Paramount and only 'retired' when the studio chiefs actually 'found' him.  The story goes that Farciot would deliberately go out of his way to make himself scarce, if not invisible whenever the cost cutting hatchet men were on the prowl and apparently he would literally hide from them, to their continued frustration in an effort to stay on the payroll!  Out of sight, out of mind I guess? 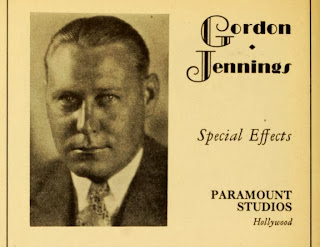 Edouart apparently had a flair for rubbing people the wrong way.  Irmin Roberts' family told me that Edouart was an arrogant man who always wanted to take the credit for everything. The esteemed miniature trick shot wizards, brothers Howard and Theodore Lydecker had a notorious run in with Farciot at a screening of effects reels for Academy consideration in the 1940's where the Lydeckers' ran their superb shots from the John Wayne war picture FLYING TIGERS, whereby Edouart, who was on the voting committee, vocally dismissed their work outright as unworthy and a waste of his time!


Cinematographer Wallace Kelley was Edouart's regular process cameraman with, among other assignments, a mammoth workload on De Mille's TEN COMMANDMENTS and the George Pal sci-fi pictures, Kelley  would later go on to become a regular director of photography and became Jerry Lewis' first choice of D.O.P on his films.

Just before we take a look at FOR WHOM THE BELL TOLLS, I would like to include this marvellous photograph (below) that was recently sent to me by the family of Irmin Roberts detailing the shooting of an elaborate in camera special effects scene utilising a large hanging miniature and partial painting from the Paramount film FRENCHMAN'S CREEK made in 1944.  It beautifully sums up the sort of specialty work carried out at the time, applied in various forms in many movies of the Golden Era, a time honoured cinematic trick that I think was also utilised in FOR WHOM THE BELL TOLLS. 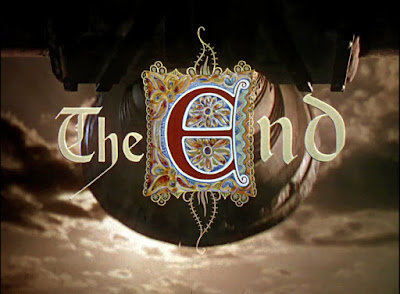