Hi there friends.  Sorry it's been so long since we last touched base, but as many of you may already know, NZPete just has to be in the exact 'frame of mind' to tackle one of his often gargantuan and always illuminating blog posts.  The mood right now is just right and I suddenly decided very late last night that today will indeed be 'the day'.... so blogging here we come with all guns blazing, as it were.  No preparation ... just frantic typing and assembling pictures in a mad, frenzy of blogging activity.
This issue will be the first in a series of retrospectives on individual films which take a firm place in my own personal Hall of Fame for their outstanding or just plain memorable special photographic effects work.  The films I've selected for this and subsequent blogs were largely neglected, overlooked, lost in the shuffle or to many of the modern viewers out there weaned on endless bloody 'Marvel' regurgitations (oh, when will it ever end?) these films may be completely unknown! 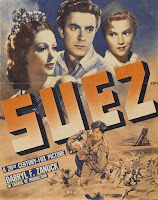 There are so many Golden Era effects shows that I still find entertaining and pack a sizable punch in their respective technical achievements, even many decades later as today's featured motion picture will prove.  Some upcoming Forgotten Gems on NZPete's Matte Shot blog include not only matte painted wizardry but in some cases stop motion animation, optical work and full blown physical effects.  In an effort to keep it as fresh as possible I'll try not to re-visit movies already covered at length - though thoroughly deserving they may be - such as all time faves 30 SECONDS OVER TOKYO, GONE WITH THE WIND, DARBY O'GILL AND THE LITTLE PEOPLE, THE NAKED JUNGLE (may re-visit that one now that I have excellent HD1080 screen captures), IN OLD CHICAGO, THE RAINS CAME and many others. 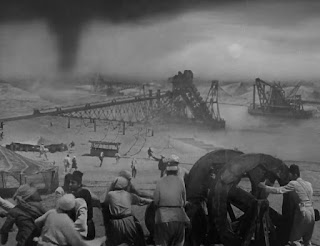 What we will be covering, starting with this post, will be the epic and still spectacular 20th Century Fox desert picture SUEZ (1938) where the sheer volume of trick shots and brilliant effects design blows me away completely.  In following articles expect to see some retro visits upon the beautiful matte showcase that was MARIE ANTOINETTE (1938) - with hitherto unseen crisp high definition imagery.  I'll be reviewing JOAN OF ARC (1947) where Jack Cosgrove and John Fulton joined forces to create evocative vistas of period France, again illustrated in exquisite 1080p images directly captured from the recent BluRay.

Also expect to see a comprehensive look at the massive Paramount visual effects show FOR WHOM THE BELLS TOLL (19430 which must set some kind of record for the sheer number of mattes and composites in a single film.  Out of left field comes the Hammer flick WHEN DINOSAURS RULED THE EARTH (1970) where Jim Danforth and a host of British matte and effects fellows created probably the best Dinosaur footage and settings since KONG.  I've recently acquired a truckload of terrific high rez BluRay frame grabs from the WDRtE, and the film has never looked better.  Danforth's animation far outclasses even Ray Harryhausen's from ONE MILLION BC in my opinion.  Watch this space... 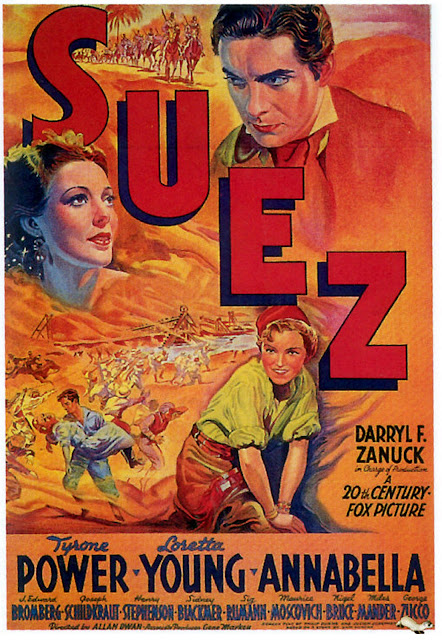 
It may not look it from the fairly dull one sheet poster, which sold the film on the basic boy meets girl(s) under the blazing desert sun level, but SUEZ (1938) was in fact a lavish and extremely well mounted period piece packed with as much spectacle as it did predictable romantic entanglements.  Star Tyrone Power was everybody's favourite square jawed leading man back in the day - decades before Charlton Heston assumed that mantle - and no one recognised this as much as 20th Century Fox's head honcho Darryl F. Zanuck, who made sure Tyrone was gainfully employed in as many huge, epic scale cinematic events as possible.


Power was a strong leading man and, especially later in his career, took on many demanding and rewarding roles.  His Fox era would see the dashing box office drawcard frequently cast in big disaster type epics, and long before anyone even coined the phrase.  THE RAIN'S CAME and IN OLD CHICAGO being two prominent earth shattering crowd pleasers from Zanuck, and both top notch motion pictures, especially in the special effects side of things, with THE RAIN'S CAME taking home the 1939 Oscars for best special visual and sound effects, and boy were they good!  A class act all the way thanks to Fred Sersen and his collaborators in the Fox effects department.

SUEZ is a fairly predictable though undeniably exciting yarn of the earliest notions and practical attempts to build the famed Suez Canal in Egypt.  Apparently historic accuracy wasn't a consideration for the studio and many liberties were taken.  That aside, SUEZ provides much drama and sprawling vistas of a cast of thousands of swarthy labourers and engineers slogging away with shovels, camels and creaky steam powered mechanisation carving out a mighty chunk of Egyptian desert in what seems an impossible endeavour.


Being a special effects blogger naturally it's that area that interests me the most.  The many (and I do mean many) trick shots are, in a word, amazing.  There are a huge number of painted mattes to be seen in SUEZ, complimented often with miniatures, optical printer combinations, excellent process work and awe inspiring full scale live action physical effects.  The production value in the visual effects sequences is on the scale one can always expect from the Sersen Department at Fox, who pretty much cornered the Hollywood studio system in producing a consistently high standard throughout the 1930's and beyond.
I've written much about Fred Sersen in many previous blog articles and in an effort to not repeat myself I've included an interesting article below penned by Sersen himself for the 20th Century Fox in-house magazine Action from the mid 1940's, which although isn't related to SUEZ, it does provide an excellent overview of the man and his department. 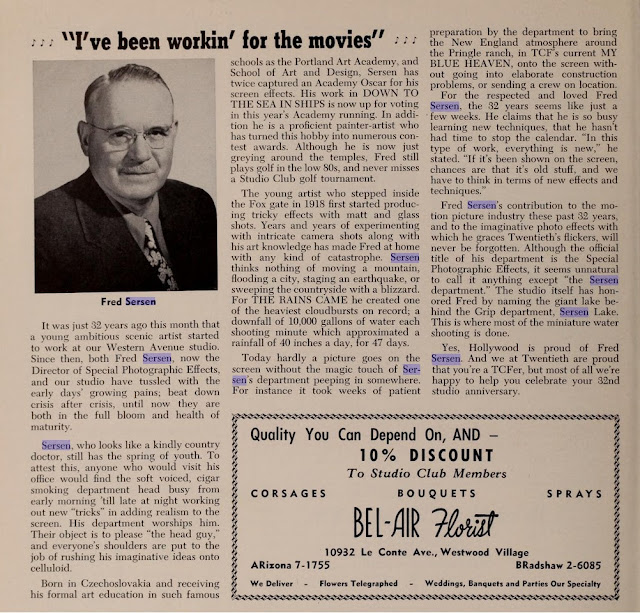 Key to the success of the large scale on-set action in SUEZ was long time Fox mechanical effects man Louis J. Witte (shown here at the studio pay window).  Witte, who is not to be confused with the similarly named Louis DeWitt of Project Unlimited fame some years later, had a lifelong association with the William Fox Studios and 20th Century Fox and engineered hundreds of physical effects for many Fox films including the phenomenal work seen in THE RAINS CAME and IN OLD CHICAGO to name but two. 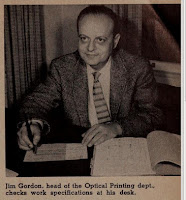 James B. Gordon was another industry veteran who operated Fox's optical department from the mid thirties through to the late fifties.   Jim would provide amazingly subtle optical work on films such as THE MARK OF ZORRO and DAY THE EARTH STOOD STILL among many others.  Gordon was an experienced visual effects cinematographer who would continue through the 1960's in partnership with Linwood Dunn and Don Weed at Film Effects of Hollywood.  As with his contemporaries in sister studios such as Ross Hoffman at Universal, Lin Dunn at RKO, Paul Lerpae at Paramount and Irving Ries at MGM, Jim too was a company man for most of his very long career.  It seems that optical men were married to their printers!

The 1930's and 40's represent my favourite period when it comes to the artform of matte painting, so, let us take a look at a long neglected and for many people completely unfamiliar picture.... SUEZ.  Let the canal digging commence! 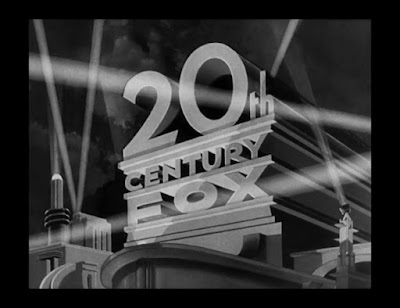 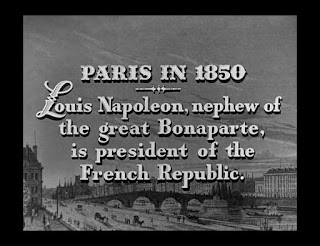 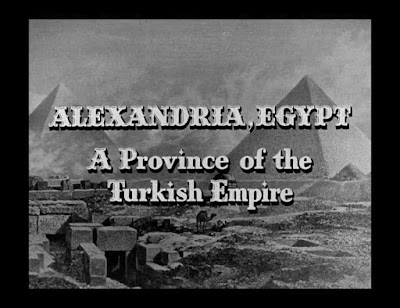 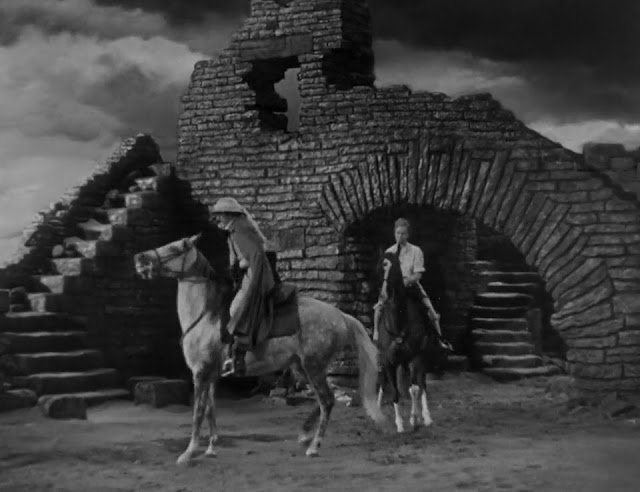 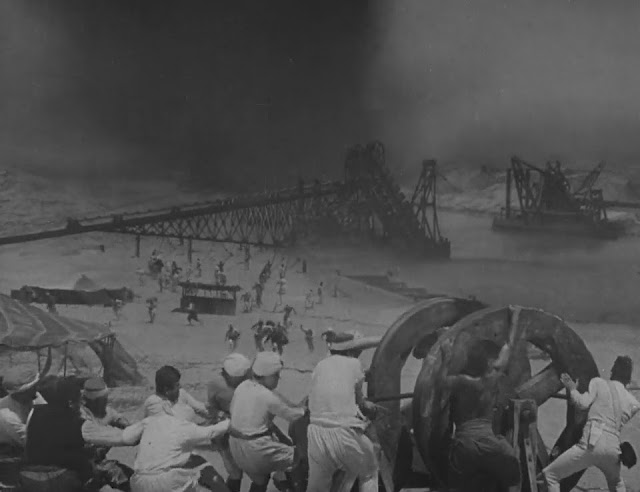 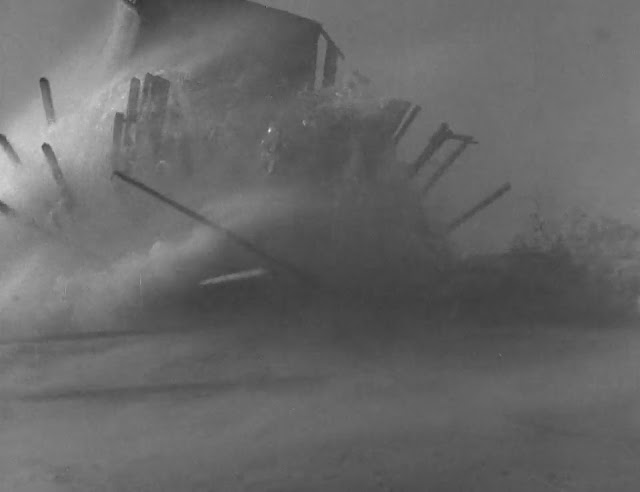 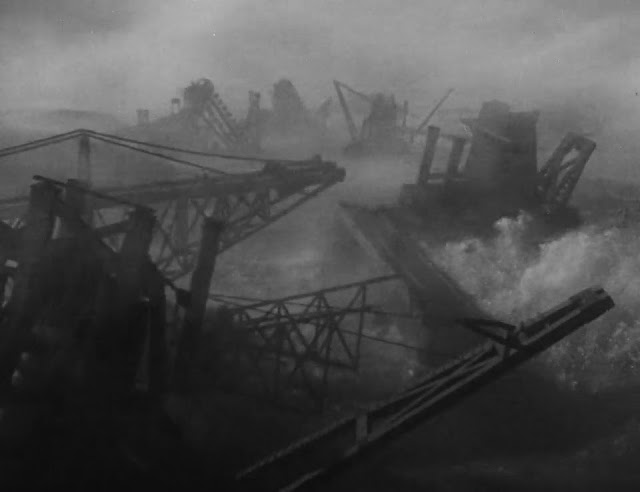