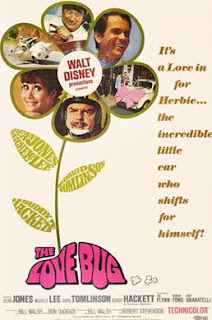 I've always had a soft spot for this film ever since seeing it on it's first release, which in itself was something of a compromise with my older cousin who didn't want to see such a kiddie film and much preferred to see THE BATTLE OF BRITAIN which happened to be showing just across the street!  What to do?  My Auntie decided that the only outcome which would suit both defiant kids was for the three of us to catch the 11.00am screening of THE LOVE BUG at the magnificent 2200 seater Civic theatre, and afterward to cross the road to see BATTLE OF BRITAIN at the 2.00pm session at the almost as magnificent St James theatre, Auckland.
Both films were great, though I recall having bad dreams for a week over the bit in the war film where the pilot gets shot and we witness his flying goggles filling up with blood. 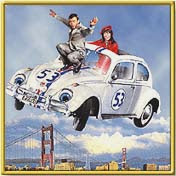 THE LOVE BUG  (1969) was a huge hit and spawned around four sequels plus a pseudo new millenium re-make featuring a third rate washed up junkie in the lead role!  So, here today we have the first of the series and I've also added a few of the more interesting matte shots from the immediate sequel HERBIE RIDES AGAIN (1975).  The special effects work in THE LOVE BUG has always enchanted me, and every time I see the film (probably over 20 viewings) I'm constantly dazzled with the many beautiful matte paintings, not to mention the many complex mechanical gags that feature throughout and the hundreds (350 to be precise) sodium vapour travelling matte composites - something of an all time record for the studio.

Anyone familiar with my blogs will know how I feel about the work of Peter Ellenshaw.  The master matte painter and production designer was semi-retired for a period from the late sixties and much of the seventies  so that he could pursue his fine art career.  Throughout this period to a large extent  matte painting duties were handled by studio matte department head Alan Maley with long time departmental associates Jim Fetherolf and Constantine Ganakes on staff.  Ellenshaw did come back to work on THE LOVE BUG  as conceptual designer of all of the effects shots and, as matte painter to work through the sheer number of matte effects required.

Disney had always been near pathologically gung ho on shooting huge percentages of their sixties and seventies films on soundstages and integrating background action in post production via their refined yellow screen process  -though I've never quite understood why?  Pictures like the later ISLAND AT THE TOP OF THE WORLD (1974) is nothing but sodium and painted matte shots! THE LOVE BUG, as mentioned above, contained a record number of sodium shots, not only for the auto racing background plates but also practically every scene which takes place outdoors involving dialogue.  This was so common in Disney's comedies and one can just gasp at the volume of shots thrown at Eustace Lycett and Bob Broughton on each production.  In an interview Lycett said "..by using travelling mattes we were able to avoid, almost entirely, taking the principal actors on location.  We had two scenes with Dean Jones in San Francisco and a couple with the principals at the Paramount ranch, otherwise all of the first unit photography was done all right here on the lot".  When asked about the shooting of the plates, Lycett commented ..."There were so many backgrounds required that I personally went along on each location to supervise and record the background data on each shot so that we could correctly match the foreground action when we shot here on the sodium stage. We also set up a closed circuit TV system on the stage so that we could run the backgrounds on monitors and cue the actors and crew while shooting.  This picture ended up with around 350 travelling matte shots and close to 50 painted matte shots, which was a record for us at the time". 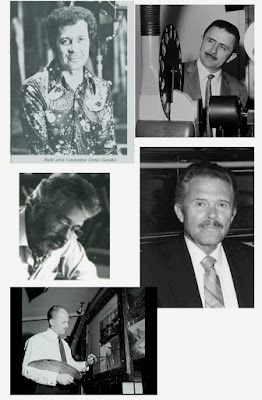 Matte effects staff at left- top: Constantine 'Deno' Ganakes and Eustace Lycett.  middle:  Alan Maley and Jim Fetherolf  bottom: Peter Ellenshaw
The many mechanical effects were the domain of Robert A. Mattey, Danny Lee and Howard Jensen.  Mattey was a seasoned veteran from 20'000 LEAGUES UNDER THE SEA whereby his giant squid still stands the test of time in engineering and puppeteering marvels (thankfully re-shot a second time in a simulated studio storm to really sell the effect).  Danny Lee too was a career Disney effects man, having worked on shows with Mattey such as ABSENT MINDED PROFESSOR and BLACKBEARDS GHOST right through to THE BLACK HOLE to name just a few.  Howard Jensen was one of A.D Flowers chief mechanical effects men providing fire and explosion effects for THE TOWERING INFERNO.  Finally, before leaping headfirst into these wonderful matte shots, and as a lifelong music score fan,  I have to mention the dizzy, head spinning comedic musical score by George Bruns that will stick in your brain for years after seeing the film......... music really does maketh the matte here!