One of the least known among todays special effect circles would have to be veteran all round effects man Roy Seawright.  For decades from the early thirties Seawright headed the trick department at Hal Roach Studios where he provided a seemingly non stop array of ingenious gags, opticals and matte shots for Laurel and Hardy, The Little Rascals, Our Gang, the 'Topper' series and even prehistoric monster epics such as the original "ONE MILLION YEARS BC" - with many of those effects shots recycled in dozens of 'B' pictures over the years. 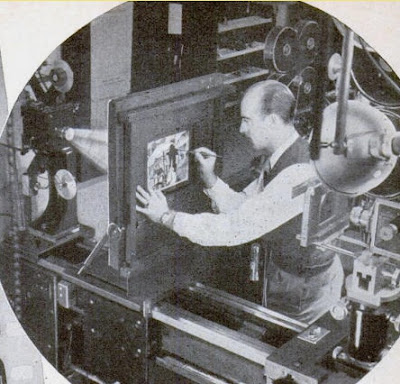 Roy Seawright had a very long and productive career in special effects and a very extensive filmography and detailed run down of his effects work may be found at:
http://theluckycorner.com/crew/seawright.html

Seawright was born in 1905 and through a series of events found himself employed at Hal Roach Studios in a number of varying capacities - mailboy, casting assistant, prop maker and animator.  Roy's own father worked at the studio and was tragically killed in a building accident constructing the new studio.
Seawright branched into optical cinematography and showed a distinct knack for rotoscope tricks including adding cell animated speaking mouths to dogs - a comedy staple in many short subjects in the 30's and 40's.
Roy was nominated some three times for the special effects Oscar for his effects work on "TOPPER", "TOPPER RETURNS" and later for "ONE MILLION YEARS BC".  The Hal Roach trick department was by no means a big department, nor a prestige unit as the major studios had, yet a constant high quality product was turned out in all areas - optical effects, matte painting and most of all wonderfully inventive physical effects for the comedies, the likes of which no other studio really had the same handle on.  Amazing tricks performed with rubber props, fake limbs and so forth all executed beautifully with jump cuts and clever editing for hilarious effect.  Stan Laurel driving his car through a huge bandsaw with the vehicle splitting in half is one such classic Seawright on set physical gag, as is Oliver Hardy's head caught in the floorboards as his body is stretched to insane limits from below - and with Hardy's yelps and Stans' bewilderment the scene in "WAY OUT WEST" is a comic gem. Roy continued to create photographic effects for alot of pictures throughout his life and he passed away in 1991.
Throughout his Hal Roach years Seawright was assisted by mechanical effects man Fred Knoth, matte artists Jack Shaw and Louis(Luis) McManus, effects cinematographer William Draper, Process experts Frank William Young and Louis Tolhurst.
Here are a collection of some wonderful Roy Seawright trick shots, including some wonderful matte paintings from "SWISS MISS" and "A CHUMP AT OXFORD" and some wonderful behind the scenes photographs of Seawright at work on "TOPPER TAKES A HOLIDAY", many of these revealing behind the scenes shots of Roy at work are from old 1939/40 issues of 'Popular Mechanics' magazine and are not of very good resolution unfortunately.

*special thanks to Thomas Thiemeyer for the "SWISS MISS" frames. 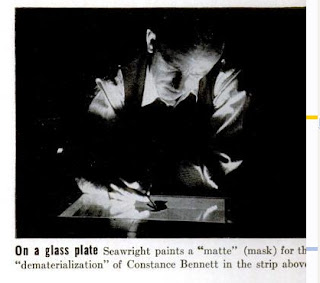 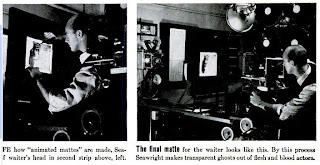 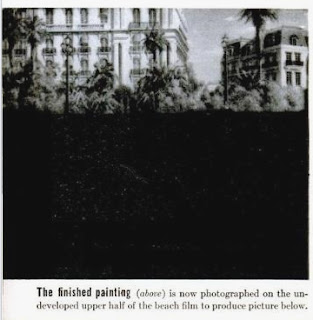