Time is of the essence; reflections on the special visual effects of H.G Wells' THE TIME MACHINE

Certainly one of my favourite fantasy or science fiction films and time has not dulled the entertainment value of this wonderful 1960 picture.  Time has, however, not been kind to some of the special visual effects of "THE TIME MACHINE" - they run the gamut from sublime to, with a hint of sadness in my voice, embarressing, and now we'll take a look back at them.
This George Pal directed film was the big Oscar winner in the special effects category in 1960 and was a popular film and remains so today with it's engaging cast lead by charismatic Australian leading man Rod Taylor who is ideally cast here.  The production is good and appears to be a 'just below medium' budgeted picture.  Much use is made of the then still magnificent MGM backlot and standing sets.  Even though the film was released by Metro the effects work was entirely farmed out to the small specialty effects house Project Unlimited run by Gene Warren snr, Tim Barr and Wah Chang.  Project Unlimited has a place in the hearts of all fantasy film buffs with their imaginative and often sensational effects work in films such as "THE POWER", "THE 7 FACES OF DR LAO", "THE WONDERFUL WORLD OF THE BROTHERS GRIMM" and television shows such as "THE OUTER LIMITS".  The effects house even provided uncredited prosthetic corpses at various scales for Stanley Kubricks' "SPARTACUS".  Little known are the other effects Project Unlimited supplied in more mainstream films such as the Universal comedy "THAT FUNNY FEELING" where they built and crashed a pair of locomotives head on and supplied the brief but dazzling post credit sequence with a major pile up on the LA freeway - all furnished via stop motion animated models by Jim Danforth and Pete Kleinow.
Variety was Project Unlimiteds' mandate, though sadly some of the technical finesse wasn't always evident, none more so than in "THE TIME MACHINE".   The film is almost wall to wall photographic effects - from wonderful examples of time lapse photography and stop frame animation through to extensive application of generally effective blue screen work and a number of matte paintings which in run the range from marvellous to mediocre.
The film really falls down in the miniature work - of which there is several major set pieces - an apocalyptic volcanic eruption which envelopes London and a number of other moments which I will discuss shortly. 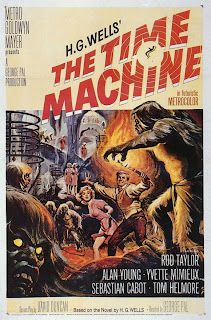 Matte artist on "THE TIME MACHINE" was Bill Brace - a former newspaper man who became Project Unlimiteds' in house art director and designer of special effects.   Brace painted on several Project Unlimited shows such as "JACK THE GIANT KILLER" (with Albert Whitlock), painted the titles for "ATLANTIS THE LOST CONTINENT", "7 FACES OF DR LAO" and "WONDERFUL WORLD OF THE BROTHERS GRIMM" (now there's a film crying out for dvd restoration).  Brace executed quite a number of mattes for this film and they are for the most part fantastic, not to mention iconic.  Sadly the mattework trips up very badly with the truly abominable matte photography which results in almost every matte shot displaying horrendous, inexcusably huge black matte lines.  Some would argue that the age of the film can forgive such technical errors, though I refuse to accept that as it was only 1960 and the composite process had long been perfected.  Just look at almost any matte heavy picture from the preceeding 40 years of cinema and one would be hard pressed to find many with such glaringly atrocious marry ups of the painted glass to a live action set.  Some might point the finger at negative shrinkage, though I think this was only ever a problem with the multiple dupe blue screen processes of the era - which oddly in this film look pretty good!
Optical effects house Howard A.Anderson Co. was contracted to carry out all of the many blue screen composites and presumably also did the painted matte comps too, though as very long established practitioners in this field, the Anderson family I'm sure wouldn't have let the lousy static matte comps through.
If the static mattes were shot and composited at Project Unlimited I can only assume that 'flights of fantasy' were their bread and butter with such day to day sub specialty as 'matte shots' outside of their area of expertise.  Even team member Jim Danforth felt a degree of unhappiness with the quality of the optical composites furnished by sub-contractor optical houses.
I hope this minor criticism doesn't diminish the wonderful entertainment value of what is still a terrific film, and one that overall does stand the test of time.
Special Photographic Effects  Gene Warren, Wah Ming Chang and Tim Barr
Matte Artist  and Art Effects Bill Brace
Stop Motion Animation  Dave Pal, Tom Holland and Don Sahlin
Visual Effects Assistant  Jim Danforth
Optical Effects Cameraman - Phil Kellison
Assistant Cameraman-Stop Motion  Ralph Rodine
Optical Effects  Howard A. Anderson,jr