Frank Capra captures the essence of Shangri-la in LOST HORIZON 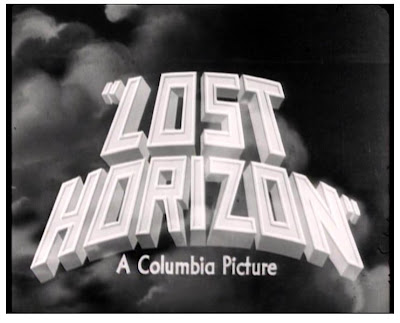 Frank Capra's 1937 picture "LOST HORIZON" based upon the novel by James Hilton was by all accounts the most adventurous decisions to 'green light' a picture that Columbia mogul Harry Cohn had ever undertaken to date.  The story of a group of people plane wrecked somewhere near Tibet and their finding a lost city hidden among the alps was more than a simple adventure movie - far more.  The almost unfilmable novel was steeped in philosophical discussion and complex arguements on what is the essence of peace and harmony - coupled with real life international tension as impending war loomed in Europe this was never going to be an easy shoot.

Director Capra was Columbia's darling - having helmed the brilliant "MR DEEDS GOES TO TOWN" the previous year for which he deservedly won the coveted Oscar  - certainly a feather in the cap of an arguably economic little studio like Columbia - the K-Mart of movie studios - no fuss, get on with it, do it fast style of film making.
"LOST HORIZON" was not an easy adaptation, and Capra was pretty determined, along with screenwriter Robert Riskin to serve the novel to the best of their ability.  There's no doubt that star Ronald Colman was the perfect choice here and his status and ability did much to sell the film to a unsuspecting public.
The original preview cut was some 4 plus hours in length and in keeping with the wordiness of Hilton's novel several sequences involving speeches and conversation actually went on for 40 odd minutes a piece!  The final cut by Capra with Cohn's approval was 132 minutes though this too went through a number of re-cuts, retitlings and censorship over the years with a number of differing versions circulating.
The film holds up surprisingly well even today in a restored format that fulfills Capra's original theatrical edit.  The production value is superb with exquisite cinematography by Joseph Walker and art direction by Stephen Gooson.  So too are the special photographic effects by E.Roy Davidson and Ganahl 'Kit' Carson.  I can tell you next to nothing about Carson but Davidson is another story.  Roy was born in 1896 and was in charge of the 'Special Camera Effects' department at Columbia from the early thirties working on a number of films and received an Oscar nomination in 1939 for the miniature airplane effects in "ONLY ANGELS HAVE WINGS".
Around 1940 Davidson moved over to Warner Brothers and was chief of 'Stage 5' as the Warners special effects department was then known.  Davidson supervised the photographic effects on a number of films including the astonishing matte work in "RHAPSODY IN BLUE" in 1945 (which I will upload here as a topic in the very near future).  Among Roy's many other credits at Warner Bros were the exploding oil refinery at the end of "WHITE HEAT" and assisting Jack Cosgrove with the huge number of miniatures and matte shots in Michael Curtiz' "PASSAGE TO MARSEILLE" among others. Roy died in 1962.
Also on the effects crew was Harry Redmond jr - a veteran who's long career in mechanical effects goes way back to the Willis O'Brien "KING KONG" (and that wasn't one of his first pictures either).  Noteworthy is the fact that Redmond was married to one of the conceptual artists on "GONE WITH THE WIND", Dorothy Holt.  As far as I know Harry is still alive today and is rumoured to be the only surviving crew member from "KONG".
"LOST HORIZON" isn't an 'effects' picture, though that doesn't mean automatic exclusion  from my interests in visual effects.  The matte shots are few and far between, as are a few miniatures and some process work, but in toto these elements help to tie together Capra's vision and are kept at a minimum...something that today's MTV reared directors and effects supervisors could do well to learn from.
*Oh, and no, I haven't seen the disastrous 1972 remake with Peter Finch and Liv Ullman, though I believe it is abysmal - effects and all!