Time for another one of those incredible, invisible and utterly wonderful old time matte shots that no one ever notices.... a genuine tribute to the long lost art of the traditional matte painter.

Today's matte shot is from the terrific 1946 film noir classic "THE POSTMAN ALWAYS RINGS TWICE"  starring John Garfield and a palpably sensual Lana Turner.  As an MGM picture the matte effects were handled by the legendary and eccentric genius Warren W. Newcombe, who oddly was not credited here.

There were three matte shots in the film but this example here is a gem I feel.  Garfield and Turner wandering down a deserted country road with as far as I can detect practically everything added around a very rudimentary bit of presumably backlot road.  Matte artist unknown, but many fine painters were on Newcombes' staff such as Joe Duncan Gleason, Henry Hillinick, Howard Fisher and Rufus Harrington to name but a few. 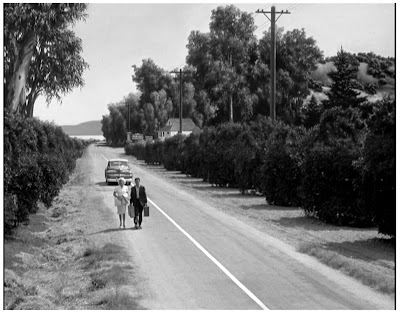