The Epics - HELEN OF TROY matte shots: part seven of an ongoing series 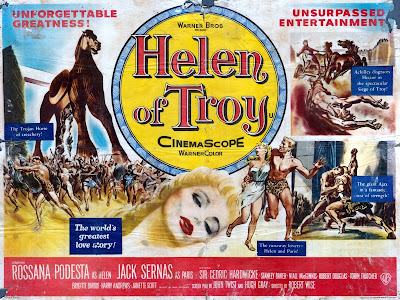 Warner Brothers big 1955 European filmed epic HELEN OF TROY, who's sole selling point was a comely and young Bridget Bardot in slinky (and admittedly attention grabbing) Roman attire.  Top director Robert Wise helmed this show, though it was decidedly lacking in his flare - especially as it was not long after films such as his masterpiece DAY THE EARTH STOOD STILL.  This one was strictly a 'collect the paycheck' job as director for hire in my opinion, though it's inclusion here is on the basis of being loaded with many interesting matte shots - some great and some not so.  Around this time Warners had produced a number of similar films  from the not as bad as it's made out LAND OF THE PHARAOHS - to the ghastly THE SILVER CHALICE (with some of the all time worst matte painted shots ever from a major studio...if you want to see them, take a look back at my extensive Salute to Warner effects blog article, as I have no intention of wasting bandwidth with re-uploading those dreadful shots).
Warner's head of special photographic effects at this period was Louis Litchtenfield - a long time Warner matte painter who had worked on films such as THE FOUNTAINHEAD - a significant trick shot show.  Lou, pictured at far left, was a vastly talented matte artist and visual effects man who continued his long career well up into the eighties with films of all sorts and all studios, from apprenticeships with Jack Cosgrove on GONE WITH THE WIND, co-painting with Fitch Fulton on MIGHTY JOE YOUNG through to the De Laurentiis FLASH GORDON of 1980.  For HELEN OF TROY it's more than likely that veteran matte artist Jack Shaw - another GWTW effects artist, would have also prepared mattes, along with artist Clyde Hill.  Effects cameraman, and one of Warners' most senior effects staffers, Hans Koenekamp was visual effects cinematographer.  As this film was prety much exclusively an Italian shoot I'd not be surprised if matte work for some shots may possibly have been supplied by artists based at  Rome's Cinecitta studios, such as Joseph Natanson or maybe even Spanish master glass shot wizard Emilio Ruiz perhaps?  I'm also assuming that another key visual effects cinematographer with a vast history at the studio, Edwin DuPar was probably involved here too as he was still working on effects shots for Warner films, at least still for the next year or so.

Sad to say, I honestly feel that the once proud Warner Stage 5 visual effects department had really had their glory days in the mid 30's and right the way through the 1940's with a seemingly never ending succession of outstanding and ingenious photographic effects work.  Regrettably I don't feel that same 'magic' was apparent in the output of the fifties and beyond, with so many lacklustre and occasionally poor effects shots cropping up during that decade.
So, on that, here are the mattes from Robert Wise's CinemaScope extravaganza HELEN OF TROY .