The Epics - CAESAR AND CLEOPATRA , KHARTOUM plus some bonus matte shots: part eight in an ongoing series

Up until now I've been mainly concentrating upon the American matte departments contributions to 'The Epics', though a great many were made by British studios, with a surprisingly large volume output by Spanish and Italian studios as well.  Naturally my recent post on Mervyn LeRoy's QUO VADIS was a fine example of British matte talent at it's very best - the legendary Peter Ellenshaw - who's work was extraordinary and among the most convincing of all Roman adventures.  Today I will cover several films, although principally it'll be the 1945 Rank picture CAESAR AND CLEOPATRA, followed by a later UK epic with outstanding matte work, the 1965 Pinewood film KHARTOUM.   I'll endeavor to also add a section on the extraordinary matte painted effects largely unseen (by me at least) from a selection of  Italian and Spanish productions which may be unfamiliar to primarily English speaking film viewers.
These latter mattes come courtesy of my good friend, 'the living, breathing encyclopaedia of Euro matte shots', Domingo Lizcano - who's website is not only heartily recommended but in fact mandatory reading (and that's an order!!)   http://galeon.com/artinmovies/indexFX.html


CAESAR AND CLEOPATRA  (1945)
The huge Rank film based on the George Bernard Shaw play was for me a major disappointment.  I loved PYGMALION, made by the same producers five or six years earlier - wonderfully witty and a total delight all the way.  I just can't get my head around Bernard Shaw meets Ben Hur.... it just didn't work, period.  Apparently a hugely expensive film with such bizarre cost over runs as bringing  a better looking and quality sand to Egypt (yes you read that right) "to ensure the right colour"!  The money however is up there on the screen with mighty sets and decor - so good in fact that I find it damned hard to distinguish the real from the matte in many situations, so some of these frames are really a best guess on my part.
The special photographic effects were carried out be the doyen of British painted mattes, Walter Percy Day, or 'Pop' Day to industry insiders.  Day was the originator of the matte process in England and France and stood, rightfully so, as the father of the matte shot process for decades.  As most people know Day was also the mentor (and hard taskmaster by all accounts) to a young fledgling matte artist named Peter Ellenshaw who himself would assume the mantle of matte master following day's retirement in the early fifties.
Day's mattes here are wonderful, that is of course if I've correctly identified the mattes and not huge sets.  It certainly looks as though the exteriors were considerable in scale, with a couple of shots possibly being miniatures for camera moves impossible on a painting.  So lets take a look back at some examples of Percy Day's amazing work....
Special Photographic Effects - Walter Percy Day
Special Effects Supervisor - Bill Warrington
Matte Photography Supervisor - Wally Veevers
Matte Camera Operator - Tom Day
Visual Effects Design - Arthur Day 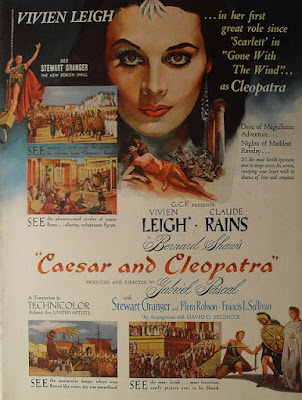 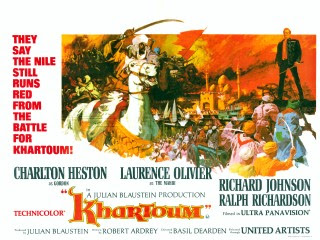 
The Charlton Heston starred bio pic of General Gordon is quite good, and was Mrs Heston's favourite work that Chuck did.  A badly miscast Laurence Olivier, in leftover OTHELLO black face as an Indian was a bit farcical, not to mention racially insensitive, but was the done thing back then for reasons I never fully comprehended. 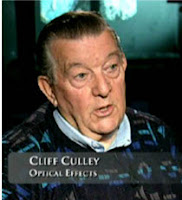 Now KHARTOUM is a good showcase for some of the best ever matte shots painted by Pinewood mainstay Cliff Cully - a painter who had been in the matte department at that studio since the mid forties working under Les Bowie and Joan Suttie, and presumably alongside a young Albert Whitlock.

Cliff, who's long retired, did alot of mattework for Pinewood over the years, particularly in the sixties and seventies before going out on his own to form Westbury Design and Optical, an effects house specialising in mattes, miniatures and optical effects with Cully's son Neil as effects cameraman and other up and coming effects people on staff such as Steve Begg, Terry Adlam, Steven Archer and Leigh Took.  One of the best matte shows the company produced were the terrific paintings for the Clive Barker horror film NIGHT BREED in the late eighties.

Cliff's mattework here is in my opinion his best, with the beautiful wide painted views of the city from atop the sand dunes simply wonderful.  Around that time Cliff employed an assistant painter, Charles Stoneham, (pictured at right painting on Richard Attenborough's GANDHI) who also would paint on numerous British films right up to THE DARK CRYSTAL and BRITANNIA HOSPITAL in the eighties. 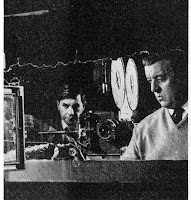 Culley's long time associate Roy Field would have photographed the mattes and carried out the compositing.  Roy too was a real trooper in the British film industry for decades on other big matte shows such as CHITTY CHITTY BANG BANG and culminating in an Oscar for the wonderful SUPERMAN - THE MOVIE in '79.
The picture at left, taken in 1967 in the Pinewood matte department shows Field manning the 65mm matte camera while Culley touches up one of his large glass paintings for CHITTY CHITTY BANG BANG.
With that brief summary out of the way I cheerfully present the matte shots from Basil Dearden's KHARTOUM

Some of these films illustrated below fall into the 'sword and sandal' or 'peplum' genre - a genre I'll be the first to admit I just cannot personally abide.  However the beautiful matte paintings seen in many of these easily warrant coverage here (and beyond this mere blog  and in an official book on the topic of old school European visual effects in my mind).

I'll admit to knowing nothing about any of these films and knowing just a little on the visual effects wizards who produced these great shots, mostly gleaned from Domingo.  Three names figure prominently in the matte shots of most Euro period films made from the 1940's through to the 1980's - those being premier Spanish matte painter and visual effects designer, the truly great Emilio Ruiz, an innovator par excellance with a extensive career in matte work. Another key name being Joseph (Jozef) Natanson - a Polish born fine artist who trained in matte art under Walter Percy Day at Shepperton in the 1940's, painting on numerous British films including THE RED SHOES up to around 1954.  Both Ruiz and Natanson passed away within the same timeframe as I recall, just a few years ago.

The third name largely associated with trick shots and matte art was Italian cult director Mario Bava.  I was surprised to learn that Bava executed mattes and glass shots on a great number of his own films, such as the wonderful DANGER DIABOLIK and even on Dario Argento's INFERNO.  There are some dazzling examples that follow of some of Bava's glass shots from some Roman sword and sandal epics.