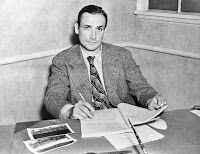 For anyone familiar with my early blogs, as well as my contributions on the matte painting forum of stopmotionanimation.com, you'll know I'm a huge devotee of golden era photographic effects man and master matte painter Jack Cosgrove.  My earlier blogs have concentrated on a number of Cosgrove matte shows - many for wonder child David O'Selznick such as my all time number one matte exposition GONE WITH THE WIND in addition to SINCE YOU WENT AWAY, REBECCA, THE PRISONER OF ZENDA,  A STAR IS BORN, SPELLBOUND, DUEL IN THE SUN as well as the many films he later worked on for Warner Brothers.  Those new to this blog may want to check out these posts - although the unfamiliarity of this technology at the time meant that the layouts were all over the place and they organisation questionable at best (I was even considering deleting the first 2 or 3 blogs altogether as they are a shambles - but will leave them as a sort of shaky, amateur matter of record) 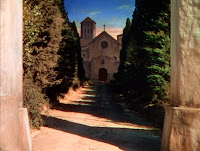 Today I will focus in on two glorious vintage Jack Cosgrove effects shows - both produced for David O'Selznick in the thirties, and notable for being among the very first 3 strip technicolour matte shot films.  The first one here today, THE GARDEN OF ALLAH was made in 1936 and was to a large extent a learn as we go along exercise for the burgeoning new Selznick photographic effects department.  I've written much about Cosgrove already so I'll not repeat myself other than to say that with friend and associate, effects cinematographer Clarence Slifer, Cosgrove was tasked with the until then unknown world of compositing glass paintings onto the 3 strip technicolour process, a task requiring much experimentation of use of filtration, incandescent light sourse on the artwork and above all else much trial and error testing of the unforgiving precision in negative developing. 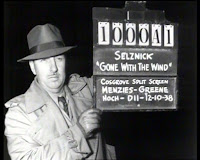 Technicolour was a lifetime away from the then bog standard monochromatic effects work, and as such the Technicolour corporation who owned the cameras and lenses placed strict caveats upon the Selznick operation (and presumably other studios of the day as well) to adhere to their dictates in all aspects of camera and negative.  For example it was a dictate that all rewinds of camera elements requiring second or multiple exposures was to only conducted by licensed technicolour staff on technicolour's premises!  For a time Cosgrove and Slifer acquiesqued to this arrangement, but as the matte load grew and grew on most of these colour Selznick productions it was soon apparent that for speed of operation and consistency of quality such work had to be carried out (behind closed doors) in the Cosgrove effects department.

The first of today's retrospectives is the Marlene Deitrich - Charles Boyer romantic starrer, THE GARDEN OF ALLAH.  The use of three strip colour in the production cinematography by W.Howard Greene and Hal Rosson is extraordinary to say the least.  Selznick was gung ho to have his films meticulously designed and orchestrated to make maximum use of the new expensive process.  Veteran art director Lyle Wheeler, who was to play a major role in Selznick's GWTW worked out glorious, almost fairy tale settings reminiscent of the many of the exquisite orientalism paintings (an art genre I love dearly) of the late nineteenth century.  The Selznick studio was a tiny one, and it's effects unit similarly 'cosy' - yet the films that came out of the studio were some of the biggest pictures of their day - though several lost money, such as GARDEN OF ALLAH which cost a fortune was not a success.  The critics trashed the film and it never really found it's audience, though I rather liked it.  Interestingly, Selznick allowed Cosgrove significant artistic and autonomous freedom in his effects work and had utmost faith in what Jack and Clarence could achieve.  No department on GWTW went more significantly over budget than Cosgrove's effects department.  Cosgrove budgeted for $29'772 yet the finished roster of mattes and composites came in at a then staggering over run of $89'832.  Selznick wasn't purturbed as he had so much faith in Jack's wizardry - a wizardry without which, GWTW could never have realised the old south anywhere near as successfully.
THE GARDEN OF ALLAH  (1936)

A year or two later Selznick embarked upon another technicolour production, this one being the delightful ADVENTURES OF TOM SAWYER (1938),  A number of lovely matte shots permeate this thoroughly enjoyable film of the famed Mark Twain classic tale.  The casting is terrific, with young Tommy Kelly stealing the show as everybody's favourite kid hungry for adventure.  I could easily imagine pre-adolescent audiences of the day screaming with delight in movie houses throughout this film and immediately re-enacting all of Tom's daring do straight after the movie emptied out.

Again Cosgrove and Slifer teamed and produced siome great heavily romanticised shots which suited the theme, time and notion so well.  Legendary production designer William Cameron Menzies was on staff here, at least for the substantial cave sequences which occupy the last 20 minutes of the film.  Menzies' creations supplemented with Cosgrove's glass art just added to the thrills and fun. Of course Menzies would be one of the key creative members of the next up GONE WITH THE WIND, and much of that film's grandeur is due to him.  So, on with the mattes.......
THE ADVENTURES OF TOM SAWYER  (1938) 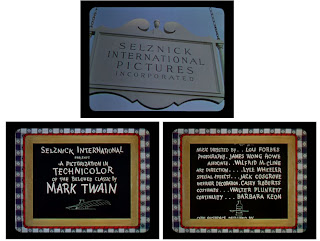