The Epics - ALEXANDER THE GREAT and SOLOMON AND SHEBA matte shots: Part nine in an ongoing series

I was only ever going to do a couple of 'Epic' blogs but upon a couple of recommendations from like minded fans of 'visual effects old school', I have continued this series, as I do after all have a zillion old matte shot frames gathering dust (or whatever they gather in a computer).... so without further ado, on with the first of today's double feature, ALEXANDER THE GREAT (1956). 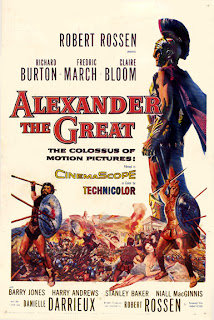 Not to confused with the convoluted, out of control ego trip that Oliver Stone turned out a few years back, this Robert Rossen version with Richard Burton, although no masterpiece, wasn't too bad and at least got to the point and stayed there.  Of course Dickie Burton was afraid by now of being typecast in this sort of thing as he'd just done the big Fox biblical epic THE ROBE (next installment on the very matte shot blog you are reading at this exact moment) though I think he's good at this type of thing, being principally a stage actor and a Shakespearian one at that, which more than lends itself to this larger than life genre.
Being chiefly a hybrid international production as far as I could ascertain - with an American director, a Welsh star, an Australian lighting cameraman (Robert Krasker), an Italian composer (Mario Nascimbene) and a Russian art director (Andrei Andreiev) it just made sense to employ a British visual effects supervisor (Wally Veevers).
As I've mentioned here several times in the past, Wally ran the effects unit at Shepperton for many years, having had his on the job training as a visual effects cinematographer in the old Percy Day matte department through all those Korda films in the mid thirties.  Wally's specialty, aside from effects camerawork was designing and constructing his own camera equipment and special effects rigging himself at home in his garage while listening, so I'm told, to country and western music (!)  Now, normally I'd not give the time of day to ANYONE who liked 'country and western' music, but Wally is different.  I've admired his work for years and feel agrieved for the man being robbed of his Oscar for 2001. 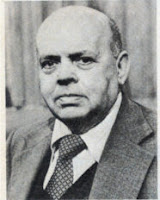 In fact, alot of the miniature rigging and specialised photographic gear Wally used on 2001 and THE BATTLE OF BRITAIN was knocked together by Veevers himself at home with his fully equipped little workshop.

Shepperton had a good sized matte department in the fifties consisting of chief matte painter George Samuels, artists Bob Cuff, Albert Julion, Joseph Natanson, Judy Jordan and later on Alan Maley, Gerald Larn, Doug Ferris, Peter Melrose and Bryan Evans.  Matte cameramen Geoff Stevenson, Bryan Loftus, John Mackie, Peter Harman and John Grant all featured within Shepperton's hallowed halls at various times and together a great many excellent and sometimes ambitious matte effects were turned out.
I fully intend to demonstrate many Shepperton mattes from various productions here on my blog at a later date, with such beautiful showcases as TAMING OF THE SHREW,  DOCTOR ZHIVAGO, THE COLDITZ STORY, VALLEY OF GWANGI, ANNE OF THE 1000 DAYS, THE FEARLESS VAMPIRE KILLERS and many more,  in addition to profiling Shepperton matte painter Gerald Larn.
ALEXANDER THE GREAT   (1956)

A big United Artists extravaganza, that although it's been 30 yeras since I last saw it I recall it as being a pretty okay sort of a show with the ever watchable Yul Brynner doing his stuff.  Effects wise, it's a bit of a mystery.  The only special effects credit was to Alex Weldon, a mechanical or physical effects specialist on many films.  Photographic effects were not credited, so it's wide open to speculation as to who could have done these matte shots and the few great miniature set pieces as well. From my colleague Domingo Lizcano I'm reliably informed that Spanish miniaturist Francisco Prosper was involved in the model work, and by the look of the high quality effects shots the mattes may well have been in camera glass or foreground shots.
My first guess would be Linwood Dunn's Film Effects of Hollywood, as he often supplied the visual effects work for United Artists product - or maybe Howard A.Anderson's effects house?  There is also the distinct possibility of the matte shots all being completed in Britain with either Shepperton, Pinewood or MGM-Elstree being candidates.  To me the work looks like that of Emilio Ruiz, though I don't believe that's ever been established.
We may never know... so while we ponder that, lets take a look at the impressive mattes and foreground miniatures from SOLOMON AND SHEBA... 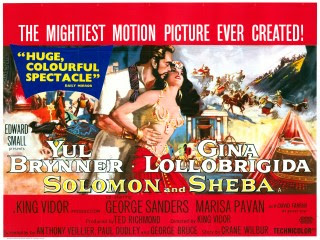