Twentieth Century Fox hit paydirt in September 1953 with the much ballyhooed exhibition of the first ever CinemaScope widescreen presentation THE ROBE.  The culmination of years of development by French scientist Professor Henri Chretien, Hollywood mogul Darryl F.Zanuck recognised a great gimmick when he saw it and wisely took an option on the process and applying the trade name 'CinemaScope'.
CinemaScope was a means of optically squeezing an image vertically in camera during the original photography by shooting through a specially engineered elongated anamorphic lens and presenting that same  processed and edited 'squeezed' footage later in cinemas by projecting that same squeezed footage back through, in essence the same lens, though this time orientated to horizontally unsqueeze the compressed image to a considerable width, generally two and a half times the width of standard 'flat' 35mm exhibition (2.35:1).

Though fraught with problems, notably related to distortion, excessive compression around the sides of the frame and focusing limitations - not to mention the sheer size of the actual Bausch and Lomb manufactured lens, which was an enormous hunk of glass, the process was a huge hit. The 'fine print' in this new sensation for exhibitors was the reality that tens of thousands of cinemas worldwide were required to spend considerable amounts in refitting new super sized screens - which given that the existing proscenium of the majority of cinemas built prior to 1953 were strictly intended to showcase a standard sized screen of approximately 1.66:1 ratio (at best) - and tiny little screens they were at that!
I know of several instances of cinemas here in New Zealand where a cut price version of CinemaScope was adopted by cheapskate exhibitors whereby the new scope footage was indeed projected through the sparkling new anamorphic lenses onto the crummy old 'flat' screens, with some two thirds of the image deliberately cropped off in the projection window with cardboard.  I myself saw IT'S A MAD, MAD, MAD WORLD and FREEBIE AND THE BEAN on a bizarre double feature at the long deceased Classic Cinema, Auckland (definitely a cheapskate outfit  whereby the cinema mensroom door was actually on the corner of the screen, so every time some guy went to the can this little rectangle at the left edge of the screen would open and a bizarrely illuminated patron visible for all to see, and scoff at!).  True story folks.
THE ROBE was an okay show I suppose - certainly yards better than the awful, utterly forgettable sequel  DEMETRIUS AND THE GLADIATORS that just screams out 'quick cash in' all the way to the box office..  THE ROBE was a tad overly theatrical for my tastes with Jay Robinson chewing the scenery like an out of control grizzly bear. I half expected to learn of a lion tamer popping in between takes with a chair and a whip to quell Robinson and throw him some some tasty treats!  As an effects show it's interesting, though I've yet to see a decent transfer of it.  Both this and it's diabolical sequel DEMETRIUS AND THE GLADIATORS are on shabby dvd transfers filled with grain and colour shift. The resulting matte composites look very messy indeed, as dupes to begin with you're dealing with the devil, so with poor transfers of duped effects shots, often duped again as part of the interminable lap dissolves that directors of this genre were fond of, you don't see the painted mattes at their best by any means.
Long time Fox matte artist and effects man Ray Kellogg supervised on both of these shows and the normal group of effects people were used - senior matte painter Emil Kosa jr, artists Matthew Yuricich and Menrad von Muldorfer, Cliff Silsby and maybe Lee LeBlanc in addition to visual effects cameramen Harry Dawes and L.B Abbott.  So without further ado, we'll take a look at the mattes from both of these pictures. 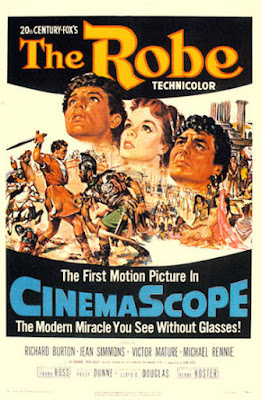 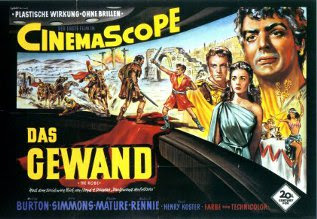 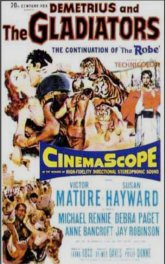