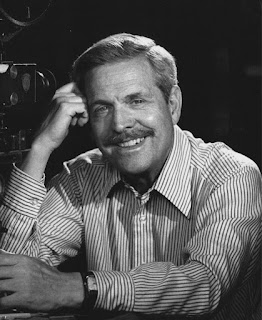 No two ways about it, when it boils down to it, the most recognised name in cinematic matte wizardry would have to be the late, great Albert Whitlock.  No other name associated with matte painting has had near the impact that Whitlock has had to generations of film viewers.  Although many of the names I have written on here previously were masters of the art form in their day, the fact that the public never really knew anything about their deliberately concealed trickery was thanks to overly protective studio bosses who often went all out to deny that the wonders up on that silver screen were anything other than great insightful film making.  Incidentally, in the early years those same megalomaniac tyrants did their utmost to try to prevent the Academy of Motion Picture Arts and Sciences from establishing a category for special effects.  True story!
It was probably Peter Ellenshaw who first recieved notoriety and public exposure for the ability to make something out of nothing with his fine matte art, thanks largely to Walt Disney who, unlike other studio chiefs actually was very proud of Ellenshaw and moreso what he was able to achieve with his brushes.  Disney was happy to promote Peter's services for films such as TREASURE ISLAND and other early live action shows - even going so far as to film a short featurette on the inner workings of Peter's matte department as part of the publicity machine for the 1952 ROBIN HOOD  AND HIS MERRIE MEN (which I would dearly love to see).
It's now commonly known that when Whitlock first took over the matte department at Universal around 1962 his first 'official' act was to remove the sign upon the door which the outgoing Russ Lawsen had had there for decades: 'Keep Out - Secret Work Inside'.  As storied matte painter Matthew Yuricich told Craig Barron "Albert Whitlock was the first one he knew of who finally broke the thing wide open and told people how it was done".  Surely a sackable offence back in the old MGM department where Yuricich had toiled for many years under the ultra protective eccentric Warren Newcombe.
One of the reasons that Whitlock became a virtual household name was due to his theory that there really wasn't any 'magic' associated with his line of work - in fact he once wrote that "any enterprising young amateur could do what he did so long as he had a steady camera and some painting ability".
So, what follows is by no means an exhaustive photo tribute of Whitlock's career - but more a selection of shots Al produced that for various reasons I like.  I was only going to put up around 40 or 50 but as is my nature, my deep interest in the subject matter got the better of me (and my blog storage capacity no doubt) and that number has more than doubled.  There are so many frames I'd like to include what follows is in no particular order, rather the alphabetised order more or less that my computer arranged the selected images intended for upload.


I feel an equal amount of tribute is overdue for the two men who made Al's art look so good over the decades at Universal - long time matte cinematographer Ross Hoffman (whom I discuss in other blogs here such as the John P. Fulton blog and the Russell Lawson blog) who worked at the studio from the early 1920's up until 1974.

Bill Taylor replaced Hoffman in 1975 and was cameraman and compositor for hundreds of Al's most memorable visual effects.
The matte artist is only as good as his cinematographer, and Al had the best.

I'd love to hear from any reader or interested party out there who has images from some of Al's impossible to see movie of the week matte work from such as the Emmy nominated VANISHED,  PORTRAIT OF A MAN CALLED JOHN and HOUND OF THE BASKERVILLES.                       Here's hoping.   :)
I hope you enjoy this selection from the vast career of one of visual effects true greats........ 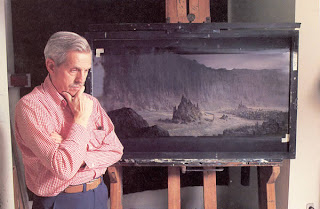 Well friends, that's about all for this blog, even though I have many more great Whitlock magical moments to share. I might throw in a few more shots at some stage I'm always afraid of running out of bandwidth or bytes or whatever the hell these damned blogs are fuelled on.