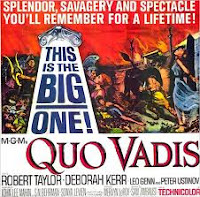 Certainly one of the better giant studio epics, Mervyn Leroy's 1950 QUO VADIS is an enduring showcase of near biblical proportions.  A good cast, screenplay and a masterful Miklos Rozsa score that still stands the test of time for us film score enthusiasts.

Naturally, being a matte shot fan I have to state from the outset that QV is one of the best Hollywood effects shows of the genre, although the photographic effects aspect was, oddly, entirely British.  The physical effects were under the control of MGM's chief special effects man A.Arnold Gillespie with ace miniatures expert Donald Jahraus - both Oscar winners a few years before for the excellent and utterly deserving THIRTY SECONDS OVER TOKYO.  Unusually, MGM's matte department had no involvement  in QV, with all matte and optical work under the control of another long time UK visual effects specialist Tom Howard who for many years ran the effects unit at the British MGM-Elstree.
Howard's expertise  largely in optical effects and blue screen work went back to the late thirties with solid credits on such films as THIEF OF BAGHDAD.  For a film as grand as QV Howard needed the services of an experienced matte artist, one able to tackle the many and varied composition and design issues on such a film.  Enter one Peter Ellenshaw. Legendary Brit matte artist Peter Ellenshaw had spent virtually all of his professional career up until the late 40's working under the auspices of another great in English matte artistry, Walter Percy Day at Denham Studios.  After Peter's return to civilian life following the war years spent in the air force the opportunity arose to set up a matte painting department at Elstree studios under effects head Tom Howard - an opportunity which Ellenshaw seized, after years of playing second fiddle  at Denham, all the while under Pop Day's steely gaze. 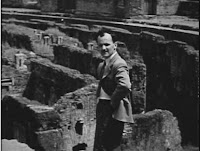 A curious set of events took place which Peter covered in his essential biography Ellenshaw Under Glass sufficed to say, the Ellenshaw matte shop was eventually up and running.  Les Ostinelli was matte cameraman and compositor, with Peter doing all of the painting.  The draftsmanship of Peter's QV matte shots is extraordinary and I'd go so far to say that his money shot - the grand parade with Rome stretching out around the gathered throngs is the best matte of ancient Rome ever committed to celluloid!  Totally inspirational and beautifully crafted, and even better than his later variation upon the same theme for the 1960 SPARTACUS.  So with that in mind, sit back and enjoy the work of one of cinema's finest artisans... Peter Ellenshaw. 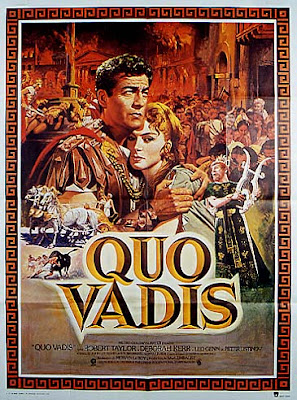 All up I've always felt that QUO VADIS had more than enough in it's favour to be a potential Oscar nominee, if not winner in the 1950 special visual effects category ... but the Academy worketh in strange ways.
The Warner DVD is exceptionally well timed and transferred and it's on Blu Ray too.  I have some Blu Ray mattes which look sensational.

Tune in again in a day or so for magnificent matte work from THE GREATEST STORY EVER TOLD.