The Epics... THE GREATEST STORY EVER TOLD matte shots - part three in an ongoing series

George Stevens' THE GREATEST STORY EVER TOLD (1965) was really one of the last of the huge Biblical genre films (though not the last in my series of tributes) as the theme tended to become more personalised in the forthcoming years with much smaller religious type shows such as BROTHER SUN, SISTER MOON and such.  GSET is an extremely well made film with beautiful production values and even the odd guest director such as the eminent David Lean and Jean Negulesco to fill some gaps in the narrative once Steven's was done with it.

Visual effects wise it's a bonanza!  Colleagues on stopmotionanimation.com matte painting thread I'm sure are sick to death of me praising the effects in GSET, so anyone tired of this, best skip to another blog as I'm going to really sing the praises of these effects here.  The film was Oscar nominated in a number of categories, including best special visual effects, yet unbelievably lost that year to the frankly plain third rate effects in the 007 adventure THUNDERBALL!!  Incredible... a film with minimal, and quite poorly executed visuals even getting a nomination is one thing, but taking home the bloody statuette is quite another.  I guess it's all down to film popularity above quality (same story with 'ET' years later when clearly BLADERUNNER should have swept that and other awards, but don't get me started).

GSET was a mammoth production, and it shows.  It's all up there on the big CinemaScope screen - in fact in 70mm 6 track stereo on initial runs.  Glorious visual effect design by Joseph MacMillan Johnson, a long time figure in volved with big effects shows such as GONE WITH THE WIND and PORTRAIT OF JENNIE.  Not a special effects man per se but certainly the vision behind the effects concepts, most of which in this case were matte paintings.  Johnson headed the MGM visual effects department after the departure of Lee LeBlanc and oversaw a number of films. 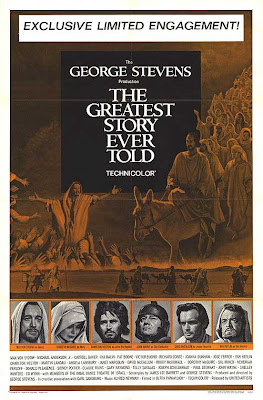