The men who painted The Man Who Would Be King 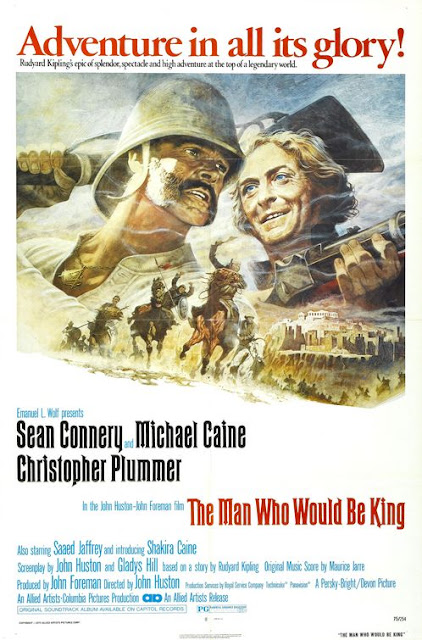 One of my all time most endearing films, and another of those rare shows where every element falls into place with craftsman like precision - from the director, John Huston, the magnificent cast that stretches beyond the obvious star power of the three leads through to veteran British character actor, the wonderful Saaed Jaffrey and newcomer Shakira Caine - none other than Mrs Maurice Micklewhite herself.  Huston's guiding hand even as far as the local Morrocan population who filled so many secondary roles many of them as memorable as the central players.  Behind the scenes accounts are amusing, with star Caine always judging the comfort of this arduous shoot by how near he could perform his scenes with the indispensible 'honey wagon' in close proximity.  I aint gonna spell it out, but the delicate British thespian digestive system considered the local food some sort of secret 'weapon of mass destruction'. (!) 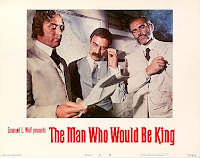 The film has enchanted me since I first saw it in the late seventies.  I found myself totally swept away with the wonderful Rudyard Kipling story and the colourful characters.  Director Huston had been trying for decades to get this film off the ground, though I can't specifically recall who was intended as leads in the earlier unmade incarnations - possibly Gary Cooper, Spencer Tracy or Clark Gable?... I know I have it in a book somewhere.


Now, the interesting part - and that is the visual effects component.  This was a British production and as such virtually all crew were Brits, with the visual effects being controlled by long time industry veteran, the highly respected effects cameraman Wally Veevers who's (by then) private effects company was based out of Shepperton Studios.

Veevers had a long and illustrious career largely associated with the doyen of matte painting Walter Percy Day (one I should cover here someday) with films ranging from the Korda THINGS TO COME, THIEF OF BAGHDAD right on through to such fantastic wonders as Kubrick's 2001 A SPACE ODDYSEY and the sublime EXCALIBUR.  THe way in which Kubrick robbed Wally and the others of the 1968 Oscar is to my mind very underhanded and unforgivable - though I know some disagree with me.

The Shepperton effects department was a significant leader in the UK studio system, having been largely set up by Percy Day in the late forties after Denham closed it's doors.  Many wonderful accounts of the Shepperton matte department were provided in conversations I had with matte painter Gerald Larn as well as interviews between matte artist Doug Ferris and cameraman John Grant conducted by my friend Domingo Lizcano.


Now John Huston, like all creative types, had one vision in his mind for the all important centrepiece of the film - that being the discovery of the lost city in the highlands bordering India, the mythical Kafiristan.  Translating the vision from Huston's mind's eye was evidentally a problem.  According to numerous published interviews the boys in the Shepperton matte department tried to bring to reality what Huston sorely needed, but failed to rise the storied directors' expectations each and every time.  At least five different matte artists in the UK attempted to produce on glass what John was after, and all missed the boat.  Interestingly at the time Shepperton had largely dispensed with it's matte department and until the previous year had just Gerald Larn on staff - a far cry from the glory days with as many as four artists and as many cameramen in the sixties.  I can only assume that if Veevers had utilised the services of other artists other than Ferris they must have been independant operators previously associated with the Veevers unit such as Bryan Evans and Peter Melrose.


This is where US based British born matte maestro Albert Whitlock comes into the picture.  In a fit of near last minute desperation (as I understand it) Huston, having exhausted his avenues in Britain turned to Universal's secret weapon, who, by many accounts had saved numerous films of varying studios over the years with his outside work.  Veevers and Whitlock knew each other I'm sure - with not only paths undoubtedly having crossed in England prior to Al's emmigration to the States, but also by virtue of having worked together (an ocean apart) on the Bond picture DIAMONDS ARE FOREVER a few years prior.

When asked recently as to what went wrong with the Sheperton matte shot attempts, Whitlock's cameraman Bill Taylor told Domingo Lizcano that it was largely an issue of the layout - "with two things being wrong - the painting was not convincing and the city was way at the top of the frame to clear the foreground man - a very un-natural composition".  Taylor continued, "Al's composition moved his city down into the honour point of the frame, from which we rotoscoped the foreground man in front of the painting to allow that (crossover), which also added a little believability".  I'd love to see those other attempts.


This isn't to belie the talents of Doug Ferris as he is an extraordinary matte painter and his invisible work on the castles and forts in THE FOUR MUSKETEERS (which in a sense of strange irony was itself a last minute rush job to replace inadequate mattes previously carried out in Spain, the very same year as the Huston film!  Film is such an unpredictable affair)

According to long time matte cinematographer Bill Taylor, Whitlock painted a few other shots for the film, though none of those made the final cut for editorial reasons. These deleted mattes still exist on a showreel at the AMPAS Bill tells me.  Many people are under the impression that Whitlock only painted the one shot on this film, and most people seem of the opinion that this was the only matte - not so.  The picture has a number of excellent matte shots by Doug Ferris largely featured within the second reel, as shown here.  Additionally Veevers provided animation and optical effects too, and according to UK matte cameraman Peter Harman, photo cut outs for some shots too.  What those are I have no idea.

So, as they say, on with the show... let's join 'Peachy' and 'Danny' on this timeless tale of adventure....and adventurers!