Cosgrove and Fulton - JOAN OF ARC 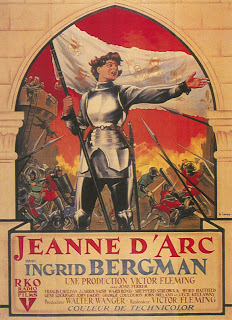 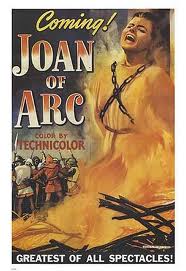 As a follow on from yesterdays Jack Cosgrove double feature blog I have the matte shots from the 1948 RKO version of JOAN OF ARC.  This is a film I've waited decades to see, and have had a hard time in tracking down a print.  As far as I know it's never been on DVD, and television here is abysmal with practically no showings of classic movies whatsoever, so VHS has had to suffice.  This in itself was hard to find but I did in the end find one ex rental copy, which is where today's less than optimal frame grabs come from. 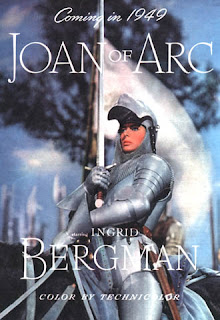 Firstly, the official re-release versions both theatrically and on home video were severely truncated from the original 142 mins down to barely 100 mins - and sadly this NTSC print is one of these abbreviated versions.  The film is good, well made and quite grand, with tempestuous GWTW helmsman Victor Fleming directing for indie producer Walter Wanger.   Joan herself is played superbly by a well cast (and gorgeous) Ingrid Bergman, with Jose Ferrer providing one of his frequent customarily uncomfortable 'I wouldn't-wanna-be trapped-in-a-lift-with-this-guy' characterisations.  Think his characters from 'Lawrence of Arabia' merged with his 'Miss Sadie Thompson' roles and you'll get my drift.
Sadly, the abrupt episodic style, as a result of the re-issue editing (or emasculation) tends to throw things all a kilter, with quick, brief scenes cross cutting to action pieces - all the while filling in the huges gaps with an incessant voice over obviously added for the abridged version.  I can't help but feel many more matte shots have probably hit the cutting room floor as a result of this 're-jig'. 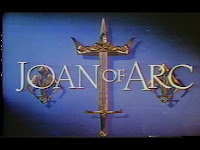 So, the effects - this was a joint effort, with both Jack Cosgrove and John P.Fulton sharing co-effects credit, which was something of a rarity in those days.  Of course readers of my blogs will know that Fulton and Cosgrove had a history as effects partners as far back as the very early thirties on Universal shows such as THE BRIDE OF FRANKENSTEIN among others - with Fulton as effects supervisor and Cosgrove as matte artist.
The two possibly worked together again at Warner Brothers in the late forties and early fifties.  It'[s my guess that Fulton possibly got the gig as overall visual effects designer and probably himself recruited colleague Cosgrove to realise the large number of matte paintings - with JOAN being primarily a matte shot show.  I've since discovered that former Hal Roach matte painter Louis (Luis) McManus was on Cosgrove's painting staff here and did in fact paint that beautiful interior of the French cathedral  which opens the film.
So, forgive the vhs quality and try to enjoy these otherwise forgotten and next to impossible to find mattes. 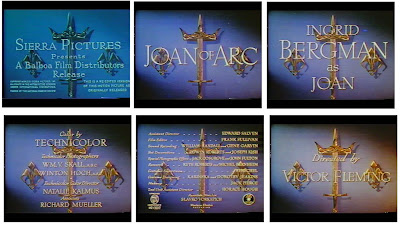 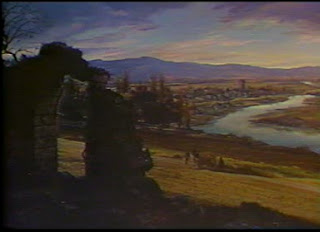