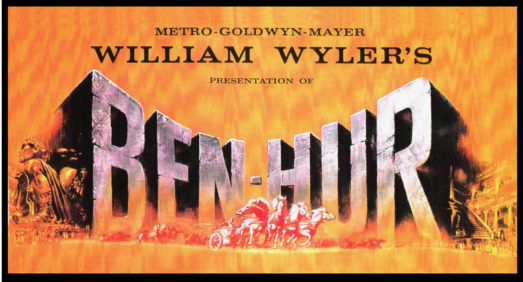 I was tempted to cover THE TEN COMMANDMENTS here but have written extensively about those visual effects on earlier posts, in both the John P.Fulton career retrospective and the Jan Domela tribute, so today I'll upload some amazing matte shots from the 1959 MGM epic BEN HUR - arguably the grand daddy of all big Biblical showcases... and at no additional cost, I'll throw in some choice mattes and hanging foreground miniatures from the old silent version of BEN HUR as well....... but wait, there's more....phone in now and get a free set of steak knives...   ;) 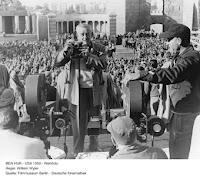 This one was BIG!  An epic novel turned twice into epic films (though I've never seen the 1925 version) and only the biggest of the studios could handle it...MGM, where they had more stars than shone in heaven... or something along those lines.    Shot for the most part on Italian locations and at the Cinecitta Studios in Rome, with post production carried out back in Hollywood.  The film earned some eleven Oscars - I think a record only broken by one of my countryman's recent efforts, a little art house indie not many people have heard of, known as LORD OF THE RINGS - THE RETURN OF THE KING by fellow kiwi Peter Jackson (and that deserved every one of those while I'm on it....go Pete!).

Effects wise, BEN HUR was unique in some respects.  For one it utilised the services of not one but two of the very same special effects men as the earlier silent version - A.Arnold 'Buddy' Gillespie and Cliff Shirpser. Gillespie had had a marathon career at MGM, starting in the art department and then working under special effects head, Englishman James Basevi, Gillespie assumed the mantle of effects departmental head when Basevi moved across to Samuel Goldwyn in the middle thirties.  Gillespie (pictured at right) never looked back.  His career was rewarded with some thirteen Oscar nominations and four Academy Awards. 'Buddy', as Gillespie was known, handled all physical, miniature and rear process shots for MGM,  with Warren Newcombe looking after all matte requirements up until around 1957, with Irving G.Ries and Robert R.Hoag taking control of opticals for many decades. Among the sensational work the team should be proud of were the fantastic THIRTY SECONDS OVER TOKYO, GREEN DOLPHIN STREET (set here in  Colonial NZ) and BOOM TOWN -which will appear on this very blog soon.  After a mammoth career Gillespie passed away in 1978.
Cliff Shirpser was an effects cameraman who's amazingly lengthy career went as far back as the first HUNCHBACK OF NOTRE DAME in 1924 and he carried on as primarily a matte cinematographer right through to THE GREATEST STORY EVER TOLD in 1967 - which is a pretty incredible run I have to say!
Matte chief Warren Newcombe had departed around 1957 and was replaced by Lee LeBlanc and Clarence Slifer as matte supervisor and senior visual effects cameraman respectively. Slifer replace the long time matte and effects cinematographer Mark Davis who had left to pursue independant work after working in MGM's photographic effects unit since 1930.  I've written often about Slifer and his methodology in shooting mattes using his special, then purpose built printer often in earlier blogs, especially in connection with the great GONE WITH THE WIND matte show - still my all time favourite of the art form.  Lee, who's shown in a delightful oil painting by his artist daughter, Dierdre, is pictured at left.  Process expert Carroll Shepphird was another original KING KONG veteran along with Slifer and would later head the visual effects department at MGM for a time in the late sixties.

The matte requirements were substantial on BEN HUR, and while I can't pinpoint all of the other artists on the film I can report that much of the fine matte art was painted by Matthew Yuricich, a seemingly lone, solitary survivor today of that golden era artform.  Matt, shown at right, had begun a visual effects assistant initially, under Fred Sersen at Fox around 1951 where he graduated from basic matte assistant to rotoscope animator and then into fully fledged matte painting under the reining head painter, Emil Kosa jr and alongside painters Lee LeBlanc, Jim Fetherolf and Ray Kellogg to name but a few key people.  Matt and Lee moved across to MGM as they were cutting jobs in the late fifties and as Yuricich was the last on board he figured he'd be the first one asked to go. 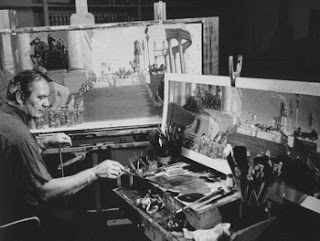 Some of the other names on the effects crew are important ones too.  A.D Flowers, who had also been at MGM for twenty years was to become one of the industry's finest physical effects men, with amazing credits as  THE GODFATHER films, TORA, TORA, TORA (bloody amazing full sized effects in that one), THE TOWERING INFERNO, APOCALYPSE NOW and best of the lot, Spielberg's 1941 which is loaded with awe inspiring effects work and should have taken the 1979 Oscar.... but don't get me started.


I've not actually seen this but have several great  effects shots that are just crying out to me to include them on my blog somewhere....  The film, directed by Fred Niblo was pretty adventurous for the day, being shot in large part in Italy and finished off in Hollywood.  Technically the film is noteworthy as a fine showcase in it's own right for the ancient art of the hanging miniature, or foreground miniature - not to mention glass paintings.
Just who was in charge of effects I can't say for sure, but I can say that Paul Eagler was a key player in the special effects photography.  Eagler later became photographic effects man on many films including the excellent Alfred Hitchcock film FOREIGN CORRESPONDENT (1940) and alot of RKO pictures.
A genuine pioneer in the world of glass shots and a major developmental force in the techniques for painted mattes was Ferdinand Pinney Earle.  A pioneer of silent cinema and very much a man of his time Earle had studied fine art at the Academie Julian in Paris, as did other notable matte artists such as Walter Percy Day and Jan Domela.  Earle was frequently at odds with competitor Norman Dawn in licensing the matte process with court battles and such.  Earle made headlines with his ability to successfully shoot an entire feature (more or less) through the magic of his matte process, THE RUBAIYAT OF OMAR KHAYYAM in 1923.  Earle was mentor to long time Warner Brothers matte artist Paul Detlefsen with whom he had trained on DANCER ON THE NILE in 1923.  Earle's glass shots for BEN HUR, some of which are illustrated here are marvellous and unlike many of his other productions, are preserved for modern audiences whereas the many silent epics he made are considered 'lost' films.  For more telling observations about Earle, catch the documentary about his son, one of Disney's background artists, on the SLEEPING BEAUTY dvd where Earle senior is almost painted in 'Daddy Dearest' type harsh disciplinarian terms.
A key member of the BEN HUR crew, and an utterly indispensible one at that was optical effects exponent Frank D.Williams - a genuine pioneer in the then largely unknown world of optical processes such as travelling mattes and  multiple printing.  Williams had invented processes for multiple pass compositing onto 35mm film - then a near impossibility, and was owner the only dedicated special effects optical house on the west coast, the Frank Williams Laboratories.  I've written about Williams' revolutionary developments in the field of composite cinematography in my blog on the F.W Murnau silent film SUNRISE, so check that out for his amazing optical work which still stands the test of time.
As discussed at the start of this blog, special effects man A.Arnold Gillespie had the distinction of having worked on both versions, as did matte cameraman Cliff Shirpser.  Gillespie at this time was specialising in the art of the hanging miniature, a flawless and utterly believable in camera composite process  which is nicely demonstrated below.  The method of hanging foreground miniatures was extensively used in the early days of film, though some practitioners, such as the great Emilio Ruiz, continued to trust in the technique throughout his very long career with hundreds of film credits such as THE GOLDEN VOYAGE OF SINBAD, THE INGLORIOUS BASTARDS  and DUNE.   I'll do a blog some day on this total genius - one of the all time greats in a class all of his own.
Special Effects Cameraman - Paul Eagler
Matte Artist - Ferdinand Pinney Earle
Miniatures Supervisor - A.Arnold Gillespie
Special Photographic Effects and Optical Processes - Frank D. Williams