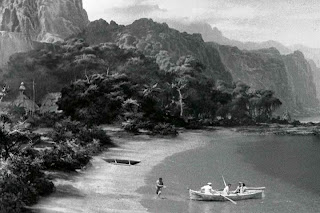 above - one of my all time favourite matte painting effect shots - "SON OF KONG" (1933) - painted by Byron Crabbe and Mario Larrinaga.
As poor as the film itself was I regard this beautiful glass painting better than similar shots in the original, classic "KING KONG"

I have quite a considerable amount of great matte shot frame grabs and some interesting other images I've collected over the years which I'll be uploading here in the near future.
Great names such as Fred Sersen, John P. Fulton, Jack Cosgrove, Willis O'Brien, Warren Newcombe, Gordon Jennings, Walter Percy Day, Peter Ellenshaw, Albert Whitlock, Wally Veevers, Vernon L.Walker, Les Bowie and Byron Haskin to name but a few key figures.
I'm still coming to grips with just how the 'blog' technology actually works (I'm very slow at grasping such technology I'm afraid) but I have the time and lots of stuff I want to share - much of which I have previously posted on the SMA stop motion animation matte painting forum - but still a fair chunk of fascinating effects shots previously 'unpublished' which I hope will interest like minded fans.
In a shameless and vain effort to draw in the potential web surfer looking for great old time visual effects here are a few choice, unrelated matte shots just to 'whet ones appetite'. :) 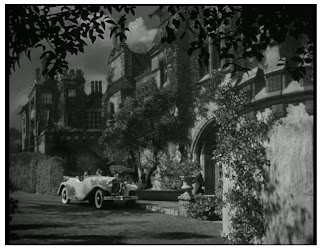