Some more mattes and miniatures representative of Jack Cosgroves' long career. Some are small images on purpose as I lifted certain images from vhs sourses and are not particularly good quality.
First up are some old effects shots from Jack's days at Universal in the 30's where under John P.Fulton he painted with Russell Lawson on some gothic horror pictures such as "THE BRIDE OF FRANKENSTEIN" and several others. 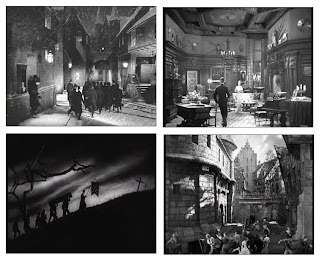 Next up are a collection of matte painted shots from the first "A STAR IS BORN" (1937) upon which both Cosgrove and Slifer teamed. Interestingly, the theatre shot 3rd row on right was subsequently 'borrowed' outright by Warren Newcombe at MGM for "Singin' in the Rain". 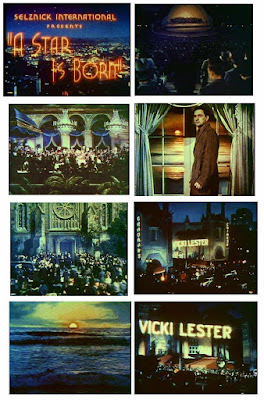 Next set, below - prime Cosgrove/Slifer trickery afoot in the superb 1937 version of "THE PRISONER OF ZENDA" with much brilliant in camera use of split screen twin shots which still look amazing. Interestingly the 1950's version replays their effects shots in identical set ups! 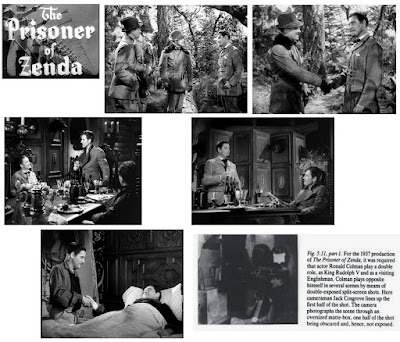 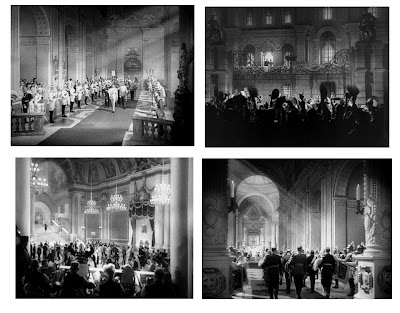 above & below - some of the many, many lovely matte paintings featured in 'Zenda'. Cosgrove  had help with many of these -  Byron Crabbe and perhaps Albert Maxwell Simpson.  In fact it was Crabbe who painted the magnificent ornate ceilings in the above grand reception sequence. 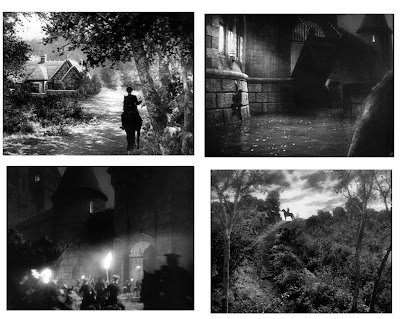 A few of Jack's Oscar nominated matte shots from the baseball drama "PRIDE OF THE YANKEES" (1942). Lots of painted in cityscapes and crowds of painted people opened up the scale somewhat. Matte artist Albert Maxwell Simpson. Process photographer Ray O.Binger 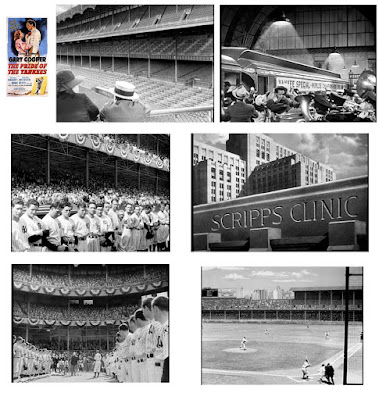 below - Cosgrove reteams with Hitchcock, this time for "SPELLBOUND" (1945) - and another Oscar nomination for Jack. Effects cameraman again Clarence W.D Slifer.
*images from 'Spellbound' courtesy of Domingo Lizcano 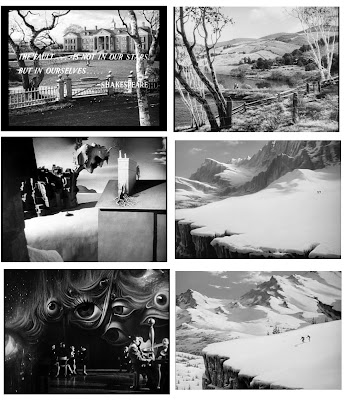 some of Jacks' uncredited work for Chaplin on "THE GREAT DICTATOR" (1941) involving 'crowds of moving people' and hilarious Fuerher-esque statues.Pioneer effects veteran Ralph Hammeras was miniatures cinematographer on this picture. 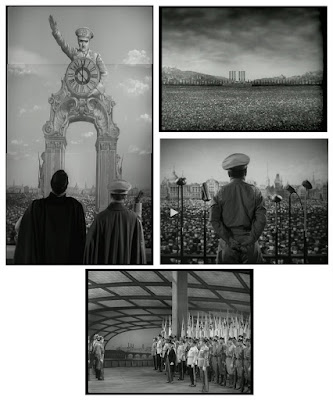 Below - One of Cosgroves' big Warner Bros effects shows when he headed the effects dept there in the 1940's, "PASSAGE TO MARSEILLES" (1941). The frames here are unfortunately only from a vhs sourse as I can't find it on dvd, but the film is laden with effects shots from start to finish.... so many in fact that my head was spinning trying to take them all in. Aside from the excellent and many matte paintings are heaps of incredible and undoubtedly complex miniature set ups.
The film has the usual model planes, ships and such but stands out of the bunch for it's ingenious and unique use of miniatures in many motorcar sequences which include not just the moving miniature car but also a fully animated landscape surrounding it - tractors, hay making machines chugging along, even COWS moving their heads up and down!! Bloody Hell!! It looks far better than it sounds. Entire French farms were built in miniature here - and with sweeping camera moves taking it all in too. Incredible! Just some of the bomber landings etc let the show down as they really don't work. Other matte artists at Warner at the time were Paul Detlefsen and Chesley Bonestell.   Effects cameramen at that period would have been Byron Haskin, John Crouse, Edwin DuPar and Willard van Enger. 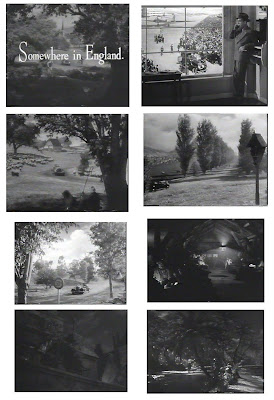 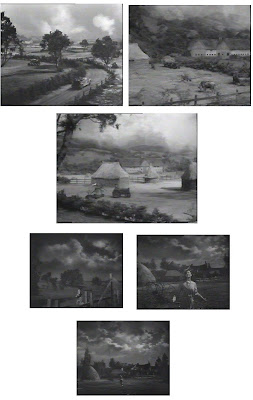 below - Cosgrove goes to Mars.... "FLIGHT TO MARS" (1951) - a bizarre little poverty row sci fi thing with Cameron Mitchell which according to the star made a packet of money too!  It is entirely possible that Cosgrove subcontracted these shots out to colleague Irving Block to paint and his partner Jack Rabin to composite.

Below - Cosgrove returns to Mars!!! This one is "INVADERS FROM MARS" directed by long time colleague and fellow "GWTW" nominee William Cameron Menzies. There is some question as to how much Cosgrove did on this picture even though he recieved screen credit for photographic effects.
According to matte painter Irving Block in Fantascene no.2 Cosgrove farmed out much of the matte painting duties to Block and compatriot Jack Rabin as Cosgrove was experiencing personal problems at the time, quite possibly alcohol related. 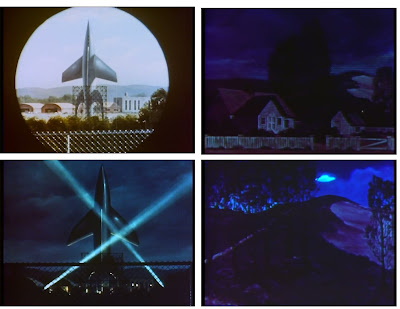 Below - three sets of effects shots by Cosgrove and the Warner Bros special effects dept for the 1944 war picture "ACTION IN THE NORTH ATLANTIC". Many good miniature sequences - some with roto'd in actors jumping off burning model ships (below) and a great plane crash and tremendous full scale conflagration scenes. I expect Byron Haskin, Edwin DuPar, Roy Davidson and others long time established at Warners to have been heavily involved here too. 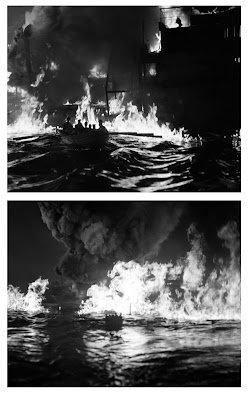 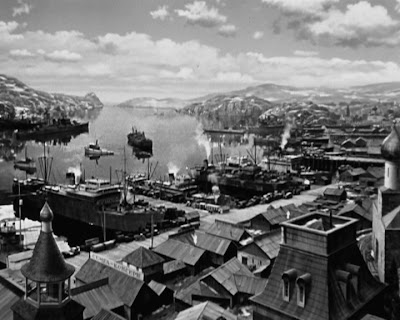 below - one of Cosgrove last films was the James Dean-Rock Hudson epic "GIANT" (1955) whereby Jack was required to paint in additional oil derricks and possibly some sky work as well. 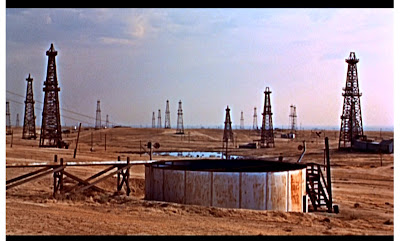