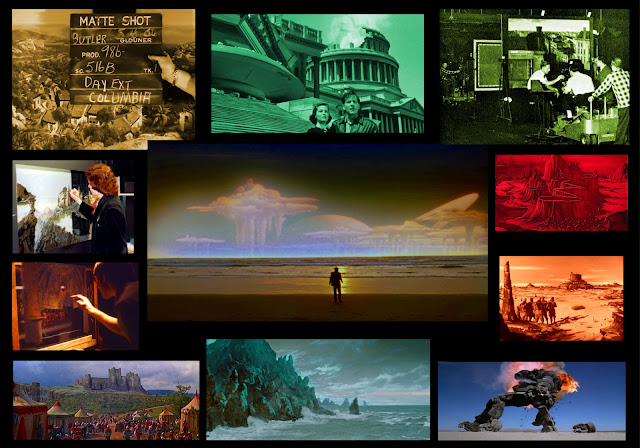 Greetings friends.  It's been a while since we ventured together down those hallowed halls of cinematic wizardry, though I'm quietly confident the extended wait will prove to have been worth the wait.  My good lady wife of nearly 40 years strongly feels I waste my time with these blog posts and is utterly convinced that nobody actually reads them, especially given the size of the average post and no one today has the attention span required.  Is she right?

Today I have tackled something a little different.  In many recent blogs, such as the mammoth ILM two-parter, the emphasis has in general been on big, mega-budget showcases, where more often than not, money was no object, and top shelf facilities and practitioners of the effects art form were in plentiful supply.  This blog post we will be examining the more economic budget effects work for a change.  The work covered here today represents various aspects of what could be termed 'low cost' trick work.  The more than 320 examples range from outright quickie 'B' movies to ambitious semi-professional projects, through to made-for-tv films of the week (and never seen again!) productions, independent movies through to Hollywood studio releases purely intended as the bottom half of some double bill, that is to say, back in the glorious era when we had such things as double or triple bills. We had several movie houses here in Auckland that would routinely show 7 or more films back to back, with kung fu, horror, westerns and sexploitation being big drawcards.  Those were the days.   A staple of my formative years!

I've put together a substantial retrospective from American, British and a small handful of foreign  film producing locales such as Finland, USSR, Czechoslovakia and even here, New Zealand(!)  Many of the technical staff's names associated with the sampled films will be familiar, though in many cases the films may not be.  While a certain number of the films and some of the shots may be familiar, I'm confident that a sizable number will be entirely new to most Matte Shot readers and fans of old school visual effects.  I always try to dig deep.   The examples illustrated cover the range of matte paintings, miniatures, stop motion, opticals and a few full scale physical effects.  Also, as a first, I've included a small handful of highly memorable old school special make-up effects, where ingenious prosthetic gags made a major impression on me way back in the day.  I could do an entire blog just on special make up fx, but will just stick to the few choice examples I've selected here for now.

I've always been fond of low budget flicks, be they cheesy exploitation shows or well meaning though by circumstance, economic sci-fi movies.  I'm often more impressed with what a film maker can pull together with very limited means over some trillion dollar exercise in self indulgence.  So many great 'little' 1930's horror films, 40's comedies, 50's sci-fi pictures, minor thrillers and westerns, not to mention the great decade of the 1970's where the sheer number of amazingly good, low key, modestly produced motion pictures (non-effects films) were made - the likes of which we'd never see again as no studio exec would green light 'em, though as usual, I digress....

What follows is, hopefully, a fascinating and informative journey into an aspect of traditional, hand made visual effects often overlooked.  It's not my intention to 'scoff at' nor denigrate any of the technical work shown here, as one must keep in mind the practitioners and artists could only ever achieve what the often absurdly tight budgets and ludicrously unworkable scheduling would allow. There is some great material here to be revealed, appreciated and enjoyed.
Enjoy the ride...
Pete

***This post, and all 176 previous blog post articles, known as 'Matte Shot', were originally created by Peter Cook for nzpetesmatteshot, with all content, layout and text originally published at http://nzpetesmatteshot.blogspot.com/


***This post, and all 176 previous blog posts known as 'Matte Shot', were originally created by Peter Cook for nzpetesmatteshot, with all content, layout and text originally published at http://nzpetesmatteshot.blogspot.com/
Do give me your feedback...it's always appreciated.
All the best
Peter
Posted by NZPete at 17:28