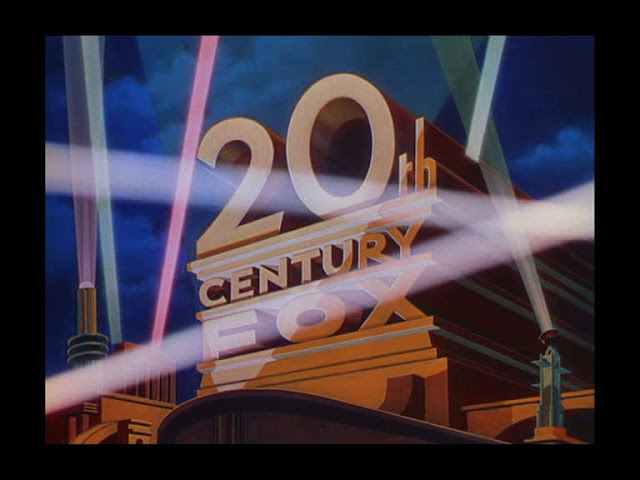 I've written much here in the past on selected effects films such as the amazing THE RAINS CAME and IN OLD CHICAGO among others, produced under the headship of the legendary special effects pioneer Fred Sersen at Darryl F.Zanuck's flagship 20th Century Fox.   What follows is a photographic celebration of the creativity and inventiveness of the special photographic effects department at Fox from the twenties up into the seventies, by which time the effects department had closed and all such work was being farmed out to independent contractors and boutique effects houses.
My earlier blogs contain a fair amount of biographical info on the key players in the Fox photo effects dept, though I will briefly highlight some of them again for those interested readers who may only now have stumbled across my blog, as appears to be the case frequently, based on the correspondence I receive.
The matte and photographic effects department was for many years known as the scenic art department, and it was one of considerable size and wide ranging trick shot abilities.  As with all of the Hollywood studios of the day, trick shots were invariably labelled under the surname of the head of that unit - Selznick Studio had Cosgrove shots, thus named after Jack Cosgrove; MGM's camera effects work was recognised under it's Newcombe shots banner after the eccentric Warren Newcombe; Universal's mercurial John P.Fulton would lead on to Fulton shots and so on - so it was too for Fox with it's brand name Sersen shots.

According to an article in Perspective magazine, Joseph Serbaroli jnr, whose father and grandfather both painted under Sersen in the Fox matte department from the mid thirties onward, "Czechoslovakian born Fred Sersen was the soft spoken, cigar smoking head of the scenic art department for more than thirty years.  He joined Fox in 1918 in the silent era and was one of the giants in pioneering scenic (matte) special effects for many hundreds of films.  Sersen was a well known watercolourist and executed many of the paintings on the walls of the Fox studio commissary". A 1944 Los Angeles Times article on Sersen's department mentions: "Occasionally  Fred would close down his matte department early and take his artists on sketching trips to 'refresh their eyes and see how nature really looks'"  Such was Fred's gravitas that even after his retirement in 1952 he was engaged on a retainer as effects consultant with the studio for some years.  Sersen passed away in 1962 aged 72

Among the roster  of talent under Sersen at Fox was his key associate and right hand man, Ray Kellogg.  Like Fred, Ray was first and foremost a matte painter and would be principal painter on hundreds of films from the mid thirties right through to his assuming stewardship of the department upon Sersen's retirement in 1952.  The photo at left shows Sersen (l) with Kellogg (r) during the filming of the big Oscar winning effects extravaganza THE RAINS CAME in 1938.  The photo at right shows Ray at work on a matte for an unknown film around 1951.
Many artists, cameramen, editors, art directors and niche specialists made up the Fox matte department, as the crowded group photo at the top of this blog will testify - though Fox wasn't the biggest by far, with Warner Brothers' huge Stage 5 Effects Stage of the 1940's probably taking the prize there.  Among the names associated with the studio were pioneering visual effects cameraman and matte painter Ralph Hammeras - probably the most experienced of all in the field, even moreso than Sersen himself, and was regarded as one of the finest glass artists in the business.  Hammeras would assume an important role in Fox productions for several decades, often adapting his skills from matte artist, effects cinematographer or miniatures supervisor as the need arose.  Among his work are wonderful riverboat miniatures in DRAGONWYCK, much special photography for JUST IMAGINE and what is arguably Fox's grandest effects film IN OLD CHICAGO.
Many matte artists would come and go from the studio over it's golden years, with the following names being just a few that I know of:  The father and son team of Emil Kosa (jnr and snr) would be mainstays with Fox for much of their film industry lives, with Kosa snr also working in the Newcombe department at MGM for a time.  Kosa snr was a self taught painter and would become mentor to many younger Fox glass artists.
Emil Kosa junior began at Fox in 1933 and is widely credited as having designed the Fox searchlight logo.  He worked for the studio for more than thirty years, won an Oscar for CLEOPATRA in 1962 and passed away shortly after completing the now iconic closing matte shot for PLANET OF THE APES.
Additional names in the matte painting roster included Fitch Fulton - the painter father of genius Universal effects man John, who ironically tried all in his power to dissuade young John from entering the dodgy film industry in the late twenties, yet Fitch himself was coaxed into matte painting later on by his son, for such luminous matte heavy films as GONE WITH THE WIND and CITIZEN KANE.  Fulton snr would be on staff at Fox for a number of years.
Other matte painters included Menrad von Muldorfer, who was with the studio for well over thirty years, from such films as THE RAINS CAME through to VON RYANS EXPRESS in the mid sixties.  The only named screen credit I can recall was for the low budget Rabin-Block science fiction show KRONOS in the mid fifties.
The 1938 unit photo at left shows von Muldorfer watching another un named Fox matte artist at work on the early stages of a matte painting. 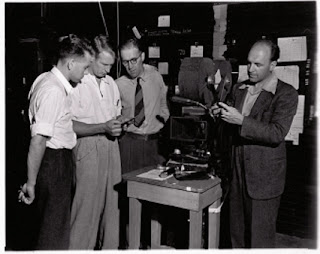 Max De Vega, Cliff Silsby, Gilbert Riswold, Clyde Scott, Hector Serbaroli, Joseph Serbaroli, Lee LeBlanc, Jim Fetherolf, Matthew Yuricich, Irving Block, Jan Domela and maybe Louis Litchtenfield were some of the other matte artists who featured anonymously  and unrewarded throughout the golden years.  Visual effects cinematographers would list several notable contributors to the artform of trick shots.  Charles G. Clarke, James B.Gordon, Al Irving, Til Gabbani, Paul Mohn, Harry Dawe, Wally Castle, L.B Abbott , Sol Halperin ,  Frank van Der Veer, Art Cruickshank and Clarence Slifer among them.  The photo at right (l to r) shows effects editor Wally White, head of dept Ray Kellogg, manager Bud Fisher and effects cameraman Al Irving with one of the large 3 strip technicolor cameras.
Visual effects cameraman and future head of the Fox trick department Lenwood Ballard Abbott, better known as 'L.B' or just plain Bill would prove himself to be a prominent force in the visual effects community was a true mainstay with the studio, and dedicated virtually his entire career to Fox.
I hope to run a one off blog on Bill Abbott in the future as I've had contact from one of his staffers from the sixties, so I'm hopeful things will eventuate.  In the meantime here's a bit of a rundown on Bill:  he started as an assistant cameraman in 1926 on Raoul Walsh's WHAT PRICE GLORY and would move up through the ranks and into Sersen's trick department, with his first true special effects camera duties on the thrilling effects shots for IN OLD CHICAGO in 1938.
After a brief sideways move back into production camera operation, Abbott resumed effects work as director of photography for the effects department in 1943 where he would remain until assuming the headship of the unit upon Ray Kellogg's departure in 1957.
In Abbott's excellent memoir, Special Effects - Wire, Tape and Rubber Band Style, he outlined the working methods of the Fox effects stage in the sixties:  "For a period of about three years we were producing 10 hours of tv a week and some 25 features a year.  Our personnel averaged 40 people.  The amount of equipment we utilised was impressive.  There were two 65mm optical printers and one 65mm matte camera; two Producer's Service triple head optical printers and three of their bench printers; three 35mm matte shot cameras, one home built scanning printer used to convert CinemaScope to flat television format; one Producer's Service contact printer used exclusively for the manufacture of separations for colour duping; a home built optical printer with a long bed used mainly for the conversion of flat to scope or vice versa; one vertical animation stand and two horizontal stands; four Mitchell high speed cameras with register pins in the viewing tube to allow for the use of film clips for lineup, and two Houston developing machines".
In describing the actual special effects stage, Abbott wrote: "The dept. was housed in a building with the art dept. and the backing dept.  Our area was approximately 350 feet by 80 feet.  We had a stage 60 x 40 feet with a 16 foot ceiling.  The stage was in constant use for shooting miniatures, inserts and odd jobs" 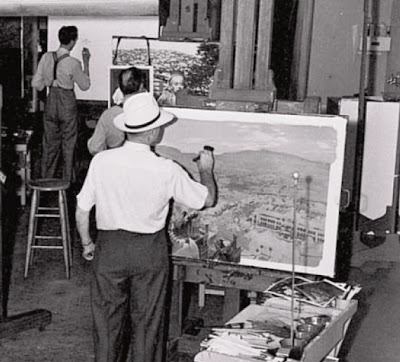