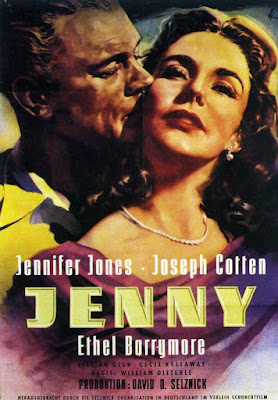 David O'Selznick's self indulgent 1948 star vehicle wrapped around his infatuation for his stunningly attractive engenue Jennifer Jones was a beautifully photographed (by Joseph August who tragically died before filming was completed) though not entirely successful ghost story of sorts which cost a fortune and sank at the box office.  The timeless notion of pathological romantic obsession is one that many have tackled, with Alfred Hitchcock's hitting pay dirt with VERTIGO being one prominent and popular example.  PORTRAIT OF JENNIE was one of several purpose made vehicles Selznick tailored, almost obsessively, for Jones around that period such as DUEL IN THE SUN.  The William Dieterle directed film is entertaining enough, despite it's obvious heavy handed meddling by producer Selznick - a trait all of Selznick's directors would be forced to clench their teeth and put up with as David insisted on being involved in ALL aspects of pre, shoot and post production - no more so than where his precious love, Jennifer Jones was involved.  David was a prodigious memo writer and dictator of lengthy notes to all key members of the creative team with endless critiques of each and every shot with Jones in it. 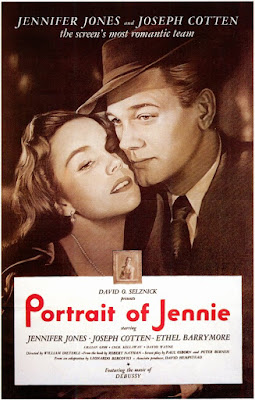 Effects wise, PORTRAIT OF JENNIE is a great looking film, with many invisible trick shots throughout which were good enough to win the visual effects Oscar of 1948.  Long time Selznick Studio photographic effects man, Clarence W.D Slifer was by this time running the effects unit, with former head Jack Cosgrove by this time over at Warner Brothers as well as engaging in solo effects jobs for Walter Wanger on films such as JOAN OF ARC and others.  Slifer started with Selznick as far back as 1935 as matte cameraman and optical effects man shooting Cosgrove's beautiful matte paintings on classics such as THE PRISONER OF ZENDA, THE GARDEN OF ALLAH,  INTERMEZZO,  REBECCA, TOM SAWYER and most notably, the gargantuan epic GONE WITH THE WIND.  For those interested, I have covered all of these films previously on my blog and have many wonderful frames demonstrating the Cosgrove/Slifer teamwork at it's best.
The Selznick effects department was a small one of around 8 technicians whose phenomenal output, both in terms of quantity and quality easily matched that produced at the larger studios with their substantial special effects departments such as Warners' whose effects team numbered between 40 and 100 throughout the 1940's.  Visual effects designer and art director J.MacMillan Johnson also figured as a career Selznick man, and whose watercolour sketches had formed the basis for many of the great Cosgrove shots featured in GONE WITH THE WIND. 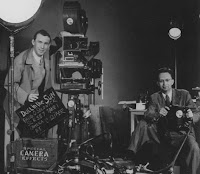 Although not an effects cameraman or matte painter per se, Johnson would be among the six recipients of the 1948 special effects Oscar for PORTRAIT OF JENNIE in a joint visual and audio effects category.  Johnson would go on to enjoy a long career in visual effects design, largely over at MGM and would continue to collaborate with long time associate Slifer on films such as ICE STATION ZEBRA and POINT BLANK.  Pictured at left are camera operator Harold Grigg and effects supervisor Clarence Slifer during the shoot of DUEL IN THE SUN, made the year before POJ.

At the time the Slifer unit had three matte artists on staff: Hans Ledeboer - a true veteran whose career began in the silent era with backdrop work and who would be the mentor to Paramount's Jan Domela in the late twenties.  Also painting at Selznick were Jack Shaw who had painted on PRISONER OF ZENDA and GONE WITH THE WIND.  Shaw would move over to Warner Brothers for the rest of his career before his untimely death by suicide in 1956 after finishing Irwin Allen's ANIMAL WORLD.  Spencer Bagtatopolis was one of Slifer's favourite painters, having joined the studio to help out with the many mattes on SINCE YOU WENT AWAY and subsequently painted significant mattes for films such as THE PARADINE CASE and DUEL IN THE SUN.
Veteran effects cinematographer Paul Eagler was signed on to shoot the miniatures in the exciting climactic storm sequence.  Eagler's career stretched way back to 1914 silent shorts at Inceville and would include such notable later examples as the outstanding Hitchcock thriller FOREIGN CORRESPONDENT.  The film POJ was experimental in it's release version whereby selected 35mm prints were mixed in stereophonic sound and a new twist added where the storm sequence would be significantly enlarged during theatre projection via a Magnascope lens system onto a far bigger screen than normal.
I must take a moment here to express my gratitude to Rick Starstairs for sharing with me the many wonderful and exciting old Selznick-Cosgrove matte images from his collection as well as snippets of other amazing cinematic archival finds too.  I'll showcase more in upcoming articles and hope to receive higher quality images from Rick when he finds them.