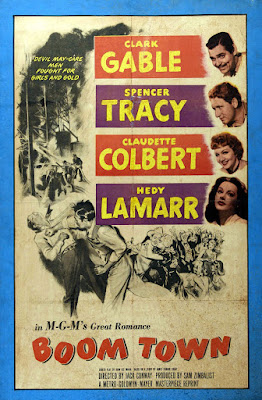 Blog Updates:   I've been viewing so many, mostly older films, and acquiring so many golden era matte and effects shots it's becoming hard to 'place' a great many of them somewhere in the blog archives.  As with most of my updates I usually just add a few representative matte shots from any given film and where the need may arise for an more in depth review, I tend to publish a full on stand alone retrospective solely dedicated to that particular film, as with today's classic.
First things first though,  with some well overdue amendments and updates to previous blog articles, starting with a stack of new Matthew Yuricich matte shots from films such as LEGAL EAGLES, BILL AND TED'S BOGUS JOURNEY, some great work from POLTERGEIST II-THE OTHER SIDE including a dazzling pullback matte composite, in addition to the final comps of those wonderful Yuricich paintings from the 1983 tv minseries 'V' which I had previously shown solely as paintings only on my Matte Art Up Close article recently.
On  my RKO blog page are the correct 'daydream' sequence matte paintings supervised by effects head Russell Cully from the hilarious Cary Grant comedy MR BLANDINGS BUILDS HIS DREAM HOUSE.  Up until now a quite different matte has been repeatedly attributed to MR BLANDINGS - that of a canyon with sheer cliffs - a painting which seems totally out of place with this film and one I couldn't really envision as even a 'dropped' scene.

My War Films Special Effects page (which is very popular it seems with military enthusiasts) has had a revamp too.  I've added several new pictures including a nice companion photo to go with those beautiful BATTLE OF THE BULGE shots, that being effects director Eugene Lourie with one of those wonderfully detailed and fully operational miniature tanks.  Also, by way of the encyclopeadic military movie resourses of my pal, 'The Dreaded McTodd', are some nice miniature battleships in action and behind the camera effects preparation by the great Eiji Tsuburaya for the Japanese film BATTLE IN THE SEA OF JAPAN (1969).

Now if that weren't enough, London based McTodd pointed me in the direction of two other amazing old (and I do mean old!) war effects showcases - the first of these being the phenomenal Howard Hughes' 1930 risky venture HELL'S ANGELS starring Jean Harlow (who is herself an incredible visual effect the likes of which I could go on about for a good hour, but this isn't really the forum....ahhhem!)  Now HELL'S ANGELS literally blew me away with the skill and realism of it's many huge scale action sequences. 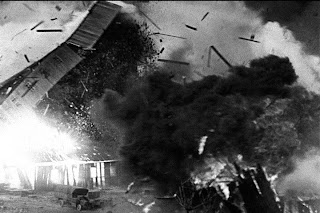 The story of WWI flyboys and German dirigibles launching assaults on Britain had many a breathtaking set piece - some real live action and some accomplished with vast miniatures and beautifully choreographed visual effects cinematography by future Warner Brothers and Columbia  Pictures special effects chief Roy Davidson, that really was decades ahead of it's time.
Extremely impressive film making, and the dvd is a wonderfully preserved part monochrome part early duo colour process.  The 60 foot model airship emerging from the clouds is as effective as the similar Whitlock shots some 45 years later and really begs the film be re-examined.


Another show with alot of miniature effects, though not on the scale of the aforementioned was the 1941 British flag waver SHIPS WITH WINGS - a film chock filled with ambitious models (some great and some utterly dire).
I've added a couple of things to my Ceilings and Painted Set Top Ups blog too - two delightful Warren Newcombe shots of ornate period ceilings from the 1943 technicolor film DUBARRY WAS A LADY, and an interesting Albert Whitlock matte shot breakdown before and after of one of Al's most memorable and complicated trick shots from COLOSSUS - THE FORBIN PROJECT (1969) as well.
My Warner Brothers blog is one of the most read  of all would you believe it, and as such I keep adding material to it.  I have a bounty of great old 50's WB mattes, many from Doris Day musicals such as CALAMITY JANE, ON  MOONLIGHT BAY  and BY THE LIGHT OF THE SILVERY MOON  as well as a very nice frame by frame matte faux pas from John Ford's 1964 epic CHEYENNE AUTUMN.  All of these were uncredited but probably the work of Louis Litchtenfield.
Lastly, I have a number of Blu Ray matte frames (though the format has so little on offer to my taste) and have added three lovely Ivor Beddoes-Joseph Natanson glass shots from the wonderful and timeless THE RED SHOES.  Also, while on this classic British film, I stumbled across some effects storyboards from this film which delineate the painted mattes and process shots which are most fascinating and these are also on the page.  I have alot more but that'll do for now.
_________________________________________________________________________________
BOOM TOWN - Gillespie and Newcombe strike oil for MGM 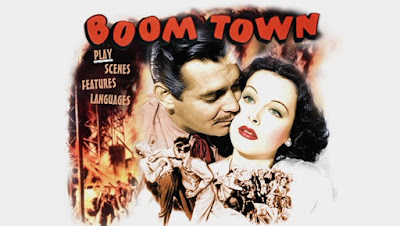 The 1940 special visual effects Academy Awards saw a vast array of titles up for the little golden guy, with MGM's BOOM TOWN among the substantial line up which included such noted entries as my favourite matte show GONE WITH THE WIND and the well deserved winning effects picture THE RAINS CAME among numerous others.

BOOM TOWN was one of those incendiary two-fisted frontier oil drilling adventure pictures which have been popular fodder for screenwriters and audiences alike over the years.  John Wayne visited the genre quite spectacularly with THE HELLFIGHTERS (1969) and featured the general scenario in several other shows too.  Susan Hayward did her bit too with blazing oil wells out of control in the 1949 effects nominee TULSA (which I featured in my John P.Fulton blog last year, and whose many fx shots cropped up again in Paramount's WHEN WORLDS COLLIDE a few years later... though as usual I digress) .  BOOM TOWN was a big affair, with, in the words of Metro's promotional department, "a five star cast in a five star movie". The stars were as big a they came - Clark Gable, Spencer Tracy, Claudette Colbert, Hedy Lamarr and Chill Wills - with plenty of brawling, boozing, romancing and daring do as could be contained within a 120  minute  film - and all delivered with the flare and gloss as is customary of a Metro Goldwyn Mayer picture.

As is the very nature of this blog, it's the special effects aspect which appealed to me the most, and this film delivers the goods - in spades.  A number of beautifully executed matte painted shots prepared under the supervision of Warren Newcombe are only part of the drawcard for me, with several astonishing full scale conflagration set pieces orchestrated by Arnold Gillespie and shot by Maximillian Fabian, some of which are optically combined with cast members by MGM's optical specialist Irving G.Ries to terrifying effect.  The effects work is superb  -  even the process work which so often can let down the whole side. It's easy to see why this film was selected as a contendor as it was really one of the few actually deserving consideration and is largely forgotten today.... well until now that is