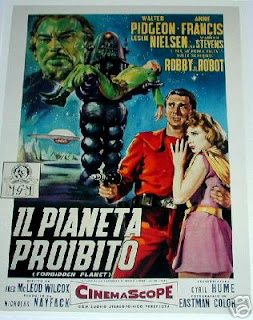 Although I was going to do the third part in my 'Mattes Up Close' series I figured I'd take a breather for a bit as those big blog articles are quite a job to put together, and I do have a number of semi-prepared one off blogs which have been sitting on the back burner for a while now.  I'll still publish that Up Close blog though I'll clear the decks of some other pressing retrospectives first. Among the films I' ll be  focusing on will be three major effects shows from MGM - all of which were celebrated showcases for studio legends A.Arnold Gillespie and Warren Newcombe.

First up will be a look back at the effects work from the 1955 FORBIDDEN PLANET which have made that film so endearing to legions of fans the world over.  Following this I'll do a retro on one of my all time favourite war films, the brilliant 1944 visual effects Oscar winner 30 SECONDS OVER TOKYO and finally the over looked 1940 Clark Gable-Spencer Tracy oil drilling actioner BOOM TOWN, which is in a class of it's own effects wise, though lost out in the Oscar that year (and, no...I'm not grieved, as shocking as that may read to some, as that was THE toughest collection of competitors ever that year).
so on with the blog.......The visual effects of FORBIDDEN PLANET...William Shakespeare in outer space.
Special effects supervisor - A.Arnold Gillespie
Matte painting supervisor  - Warren Newcombe
Optical effects  - Irving G. Ries
Matte painters - Howard Fisher and Henri Hillinick
Assistant matte artist - Matthew Yuricich
Miniatures cinematographer - Maximillian Fabian
Effects cameraman - Harold Mazorati
Supervising matte cinematographer - Mark W. Davis
Assistant matte cameraman - Dick Worsfield
Visual effects editor - Ben Fugelsby
Miniatures - Glen Robinson
Special mechanical effects - A.D Flowers,  Jack McMaster,  Logan Frazee,  Bob MacDonald,  Chuck Frazier,  Dean Pearson,  Joe Zomar,  Earl McCoy,  Max Gebinger,  Dion Hansen and Eddie Fisher
Robby the Robot designer - Bob Kinoshita
Animation supervisor - Joshua Meador
Effects key animation - Dwight Carlisle
Animators - Joe Alves, Ron Cobb and Ken Hultgren
Effects animation cameraman - Art Cruikshank
Supervising scenic painter - George Gibson
The film FORBIDDEN PLANET was to a large extent a peculiar merging of the talents of England's best selling 16th Century quill penned novelist William Shakespeare and 20th Century matte painter Irving Block - a more curious set of bedfellows you'd be hard pressed to find.  What is evidently Shakespeares The Tempest was updated - seriously updated in fact, into a science fiction future far removed from what Willy ever would have imagined.
This science fiction re-imagining was largely the concept of both Irving Block and Allen Adler.  Block was a long time matte painter with Fox and MGM before branching out as an independent effects concern  in the early fifties with partners optical fx cameraman Jack Rabin and title artist Louis DeWitt.
I have my own theory, albeit an arguably off the wall one as to FP's origins, and I'll discuss this at the end of the blog and eagerly await responses from historians, academics and sci-fi buff's alike.
Part of the success, which as far as I'm aware was not immediate and took decades to be realised, was due to the wonderful look of both the alien world and it's vast sub-terranean machinery, but also the screens' newest and, until a later sensational Irwin Allen tv variation, it's Robot - affectionately known as 'Robby'. 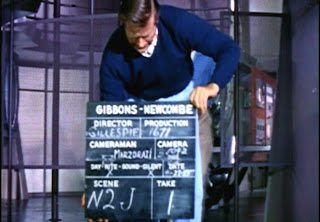 I'm an enormous fan of MGM special effects chief Buddy Gilespie's work - with a mammoth virtually exclusive Metro Goldwyn Mayer career which stretched from around 1925 in the art and title department to his assignment as chief of all physical, miniature and process projection effects at the studio in 1936 - from which time Buddy was involved with hundreds of pictures for the studio - with as best I can verify THE GREATEST STORY EVER TOLD probably being his last credit.


Buddy's multiple talents also extended into cartoon animation for the studio as I found out by accident just the other day. where his name cropped up in the credits of an old cartoon.  Gillespie passed away in 1978 with an armful of Oscars amid his numerous accolades.  Working alongside Gillespie was his long time partner, the Austrian born miniatures cinematographer Maximillian Fabian, who had been with the studio for more than twenty years at this point, having photographed the stunning miniature scenes of destruction for James Basevi and Gillespie on SAN FRANCISCO in 1936, the jaw droppingly realistic bomb run set piece for 30 SECONDS OVER TOKYO (1944) and similar flaming conflagrations with Buddy and Donald Jahraus on Mervyn LeRoy's epic QUO VADIS in 1950 - three amazing  high points in Fabian's long, celebrated career.

Optical effects specialist Irving G.Ries too had already been with the studio for close to 30 years by the time F.P rolled around and had produced such stunning and complex optical printer jigsaw puzzles as the dancing shoes for Fred Astaire's BARKLEYS OF BROADWAY (see my MGM Musicals blog for that one) and the remarkable and I'm assuming highly problematic underwater travelling matte shots for Esther Williams' DANGEROUS WHEN WET which still leave me in awe to this day.  (see that above mentioned blog article for those shots too.....go on, click it...you know you want to!) 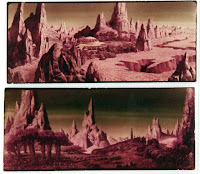 I've written often about matte supervisor Warren Newcombe so I won't retrace all of that, except to say that although the matte work here is serviceable and features at least one of cinema's most memorable shots it's in no way the best representative work from the iconic Newcombe department in my opinion.  A trio of matte artists painted on FP under Newcombe - Howard Fisher, Henri Hillinick and Matthew Yuricich -and I'll go into some detail later as to their contributions as best I can.
At right are two rather faded 35mm test frames showing Newcombe matte shots of the living quarters and adjacent graveyard on Altair IV so central to the plot . 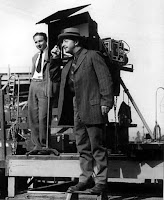 As an interesting sideline to Newcombe's headship of the matte unit, Irving Block, who himself was a matte painter under Newcombe at one stage said in a 1979 interview in Cinefantastique:  "Warren never touched a brush...He was my friend and I worked for him, but Warren Newcombe never did anything.  He sat in his office and played around with his shortwave radio calling his friends to play chess"
The photo at left is taken from Craig Barron's indispensible chronicle The Invisible Art - The Legends of Movie Matte Painting, and shows Newcombe (foreground) with long time cameraman Mark Davis posing against their matte camera set up.


The film was up for the effects Oscar against John Fulton's THE TEN COMMANDMENTS - and while that's a tough choice I'd probably go with the Fulton film for the arguably astonishing Red Sea set piece - matte lines and all, as it was an amazing engineering and photographic achievement with more optical tweaks than all of FORBIDDEN PLANET put together.  I fully expect some criticism here of my choice naturally. 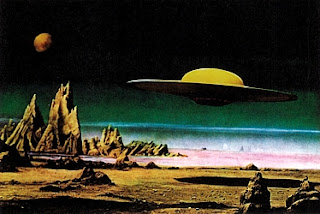 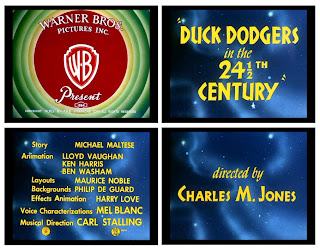 Now, I did say at the start of this blog that I had my own pet theory as to the origins of FORBIDDEN PLANET.  Some say William Shakespeare, others say Irving Block .... well I've come to the (arguably off the wall) conclusion that in fact it was none other than Chuck Jones whom I 'd like to think of as the unheralded motivation behind this film.  Just take a look at some frames here from one of my all time favourite Warner Bros cartoons, the remarkable and utterly brilliant DUCK DODGERS IN THE 24th AND A HALF CENTURY" which Chuck produced in 1953 and tell me you don't see a dozen similarities.

Chuck Jones was a true visionary, and his timeless Looney Tunes and Merrie Melodies are as side splittingly hilarious today as they were in the fifties (the peak of all good cartoons).  I simply can't watch the MGM feature without seeing those wonderful , timeless Maurice Noble and Philip DeGuard Looney Tune  backgrounds everywhere, and likewise, when viewing this Daffy Duck Looney Tune (which I must have seen 100 times) I keep expecting to see Leslie Nielsen and Walter Pidgeon arguing over the unstoppable power of the 'id'.

I fully expect to lose whatever thin veil of credibility I might have by writing this jarring quasi-critical post script, which is bound to upset the natural order of film analysis by a tall order, but hey, it's my damned blog so chill out and 'nod' in feigned semi-agreement and rest assured the straight jacket is indeed a snug fit.  Time for my medications.