"Put a top on that set, please": Ceilings, Chandeliers and the matte artist

MATTE NEWS:
Before launching into, what will undoubtedly prove to be another enthralling episode into the matte painters world, I'll just update you on some of the new things pertaining to this very blog, firstly some updates.
I've had such good fortune recently in relation to British special effects work with the acquisition of some real matte art treasure from both the golden era of UK glass painting - the 1940's - as well as the more recent late eighties era - probably the last few traditional glass paintings executed in that industry.
To start with, courtesy of Leigh Took and Dennis Lowe I've been sent high resolution images of a number of extremely rare J.Arthur Rank original matte shot log sheets from  the 1940's which represent just part of the quite significant record of each and every matte and miniature special effect produced in the Rank effects department over several decades.  Among the examples I have are the original before and after frame enlargements of the glass shots from David Lean's OLIVER TWIST along with the original artists' description explaining the elements involved - set, models, glass art and so forth.  These wonderful documents were thrown into the trash by chief artist Cliff Culley at Pinewood back in the early 80's as part of a general clear out of the matte department.  Luckily, Cliff's apprentice of the day, Leigh Took seized upon this moment of madness and retrieved as much as he could from the junk, realising the importance of securing the providence of such specialist work.
The examples I have are a mixed bag of films mostly from the late forties with the work of Les Bowie, Albert Whitlock, Cliff Culley and Joan Suttie, whom I believe was running the matte department at the time.  Whitlock's cameraman, Bill Taylor told me that Al often mentioned his work being overseen by a woman who ran the unit back then, and this would have been Suttie.  I've got a few of these vintage Rank matte log sheets included in today's rather eccentric blog article, and have updated, among others, the Charles Dickens matte blog to add the OLIVER TWIST material there for all those who love such things as I do.
Another wonderful find - again courtesy of my friend Dennis Lowe has been a selection of wonderful glass paintings long thought lost, though hidden away at Shepperton Studios in an equipment storage room.  These paintings are the work of Doug Ferris and cover films such as BARON MUNCHAUSEN, SEVEN YEARS IN TIBET, PRINCESS CARABOO and others I can't identify, but would have been painted by Doug while he was at the Magic Camera Company sited at Shepperton in the eighties.  As if that weren't enough, Dennis has located some of the original Bob Cuff glass paintings that Bob did for GUNS OF NAVARONE way back in 1961 - and they are still in immaculate condition - having been cared for lovingly by matte cameraman John Grant and then one of Bob's sons....and boy do those original glasses look fantastic!
More to come on these wonderful matte artifacts later...
Just when I thought it were safe to relax my rapid heart rate from all of this excitement even more goodies have surfaced...  the legendary matte work of Walter Percy Day no less!  In preparation for his new documentary on the career of the doyen of British matte painting, Dennis has been priviliged to interview Day's grand daughter, Susan, who not only was delighted to reminisce at length about her famous  and , arguably highly complex grandad but is also the official curator and archivist for all of Percy's vast collection of documentation and photographs spanning his long and illustrious career.  Susan's father was Tom Day - long time visual effects cinematographer for Pop from the late twenties through to the late forties.  Among the many artifacts I've been fortunate enough to glimpse in the rough cut of this doco are many rare before and after matte shots from, among other titles, THIEF OF BAGHDAD - including some unused mattes never before seen.  Although I've only seen Dennis' long rough cut of the doco at the time of this writing he's just told me it's now complete and up and running and may be viewed on his site (though any readers out there unlucky enough to be burdoned with the pathetic and utterly unreliable New Zealand internet may find it a long, stop start, crash, start again slog):
http://www.zen171398.zen.co.uk/index.html
It of course goes without saying that anyone who doesn't know who Percy Day was shouldn't be on this blogsite to begin with and should be on one of those digital matte painting forums elsewhere(!)  :(


What a week... after being blown away by Pop Day's wizardry I had still one more surprise to come.  I get quite a few letters from readers  - some of whom are connected to the visual effects world.  Well being a firm supporter of the under appreciated British effects industry I was so thrilled to be contacted earlier today by the grandson of Les Bowie 'the father of UK special effects'.  Well this was really such an unexpected bonus, and one I'm so excited about.  I'm very hopeful that I may be able to produce a tribute article on Les in the near future as I understand there to be many wonderful slides documenting Bowie's long, long career as well as a few original Bowie mattes still in the family.

Now if only they'd release the man of the year, Mr Wiki-Leaks, Julian Assange from those trumped up politically motivated bullshit charges my week would be bloody perfect.   Now where's my Jack Daniels?


UPDATES:
I've added alot of new material to various pages here, with the following being notable.
As already mentioned there are some terrific, ultra rare Les Bowie-Joan Suttie OLIVER TWIST matte shot breakdowns on my Charles Dickens mattes page.
Also, my Russell Lawson page has a number of new shots including SIGN OF THE PAGAN, LOVER COME BACK (with a tremendous mountain lake matte), CHIEF CRAZY HORSE (with painted landscapes and teepees).
Over on the Ray Caple tribute are some nice shots from Tim Burton's BATMAN and from  the Edgar Allen Poe flick CITY UNDER THE SEA (aka WAR GODS OF THE DEEP).  Les Bowie's daughter told me she has an original matte painting at home done by Ray, so I'm crossing my fingers that a picture of this rare special effect artifact will come my way.
Jan Domela's page has a great art directors' drawing of Jan's famous tower matte for VERTIGO which deliniates where production designer Henry Bumstead proposed the painting to sit in relation to the plate.

The Warner Bros page has some shots from ANGELS WITH DIRTY FACES and some Lou Litchtenfield shots from THE FLAME AND THE ARROW.

"PUT A TOP ON THAT SET" -
CEILINGS, CHANDELIERS and the MATTE ARTIST

If ever there were an idiosyncratic topic for this or any other blog for that matter, it must be this one!  I've always had a bit of a penchant for those 'top up' matte shots - you know the sort of thing - a set is built and more often than not the ceiling isn't normally added due to lighting rigs and so forth - with the director literally telling the effects artist to do just that - "put a top on that set please".  I've read so many accounts where the director literally handed the matte department a can of film, especially in the old days and said "here... put a castle/roof/mountain/sky on that will you".  The bloody cheek of it!

Primarily I've concentrated on ornate ceilings, chandeliers and interior architectural enhancements here today, though as is my somewhat undisciplined nature, I've broken my own boundaries on a few occasions here and have ventured into arguably borderline set top ups with some shots I just like - and because I can.  Hey if you don't like it start your own matte shot blog.   So, for those who are curious...read on, and enjoy.   :) 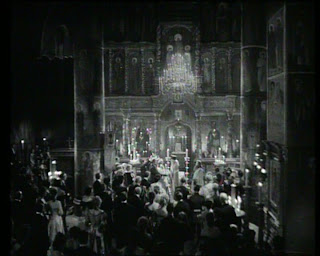