The art of invisibility according to Fulton and Horsley 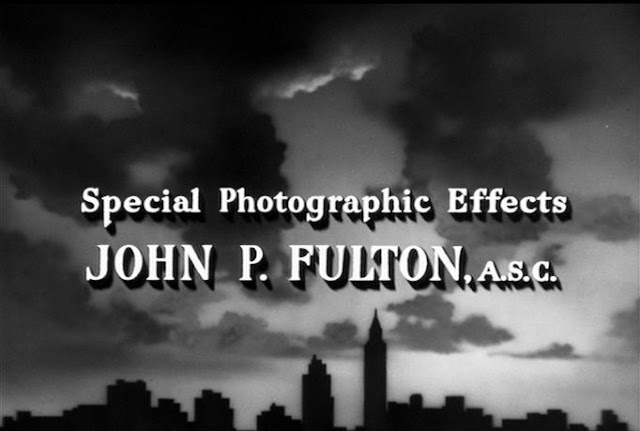 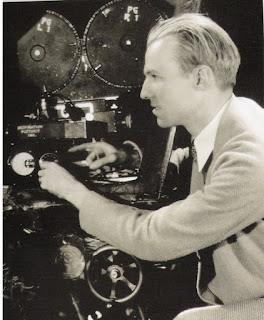 I've always been intrigued with the wonderful transformations and invisibility effects produced by John P.Fulton and his assistant David Stanley Horsley during their combined and respective independent era's at Universal.  Anyone familiar with my blog will know how I feel about Fulton's expertise in the competitive arena of special photographic effects.  I'm of the opinion that Fulton, despite his abrasive personal quirks was a genius in the field, and one who's tireless quest to reach his own 'holy grail' in special effects work was regrettably cut short by his untimely death at only 63.  I've already written extensively about John and his many great effects moments, which for the uninitiated, may be found here.
As regular readers will know, this is primarily, though not exclusively a matte painting tribute blog.  Though in saying that I will say that I love all old time special effects methods - miniatures, optical effects and both stop motion and effects cell animation .  Naturally the films covered here are heavy in optical work as well as wire gags and there are even a few matte paintings as well. Today's blog is really an encapsulation of some of the choice moments from the five INVISIBLE MAN films as well as Horsley's later ABBOTT AND COSTELLO MEET THE INVISIBLE MAN. 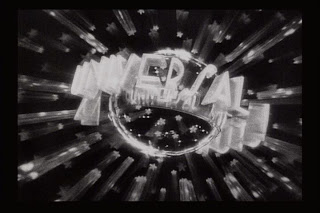 Pretty much the same effects crew worked on all of these films, with John Fulton certainly in charge of all of the five official films in the series.  Fulton's long time assistant David Stanley Horsley also worked on almost all of these films as far as I know, coming on board with John around 1934, Horsley also supervised the effects on the  1951 ABBOTT AND COSTELLO film as he had assumed headship of Universal's effects unit by then, in fact since the mid forties.  Optical effects cameraman Roswell A.Hoffman was certainly involved intimately on all of these films, and as I've written previously, was tied in with that studio's visual effects up until 1974 with EARTHQUAKE being his retirement project. Rotoscope effects artist Millie Winebrenner was also a key player in the Universal photo effects unit and worked on all of these films extensively as head rotoscoper, with several roto girls under her.  Winebrenner too had a huge career at Universal and worked well into the late seventies in Al Whitlock's matte department.  The first film in the series had Jerome Ash and Bill Heckler working with Fulton on the effects shots, as well as Fulton's mentor, optical effects pioneer Frank Williams processing the optical process shots at his own specialty effects laboratory. Matte painting duties in the first film were carried out by Russell Lawsen and Jack Cosgrove, with Lawsen working as sole painter for subsequent films.  Miniatures were the domain of Charlie Cleon Baker - another veteran Universal employee with Donald Jahraus who would soon become MGM's number one models expert and Oscar winner. John Joseph Mescall photographed the miniature scenes.  Special mechanical gags and rigs were handled by Al Johnson and Bob Laszlo.

There is a wonderful article penned by Fulton himself in the June 1934 issue of American Cinematographer, which thankfully was reprinted by George Turner for the essential ASC Treasury of Visual Effects book in 1983.  Fulton was often keen to give interviews and speak about his effects work even though, paradoxically, he was never especially proud of his many achievements.  I'll use a few of Fulton's quotes in the following tribute as well as some very useful technical details of the processes involved provided to me by former Universal effects cameraman Bill Taylor who, in addition to being a first rate effects cameraman has a great insight into the working methods at Universal studios over the years.

One of the best gags, and one much imitated and later refined by Fulton for later films was the routine of a set of clothes performing  as though an invisible person were wearing them in several scenes with other actors .Basically, aside from initial wire work gags the one main technique chiefly employed by Fulton for the first film was the Frank Williams black backing multiple printing technique.   For these Fulton would shoot the normal action with the other actors first with the movements and so forth carefully timed and worked out in advance.  Fulton would develop the negative and then prepare the set for the trick work.  Said Fulton "we used a completely black set, walled and floored with black velvet to be as non reflective as possible.  Our actor was garbed from head to foot in black velvet tights, with black gloves and a black headpiece rather like a diver's helmet.  Over this he wore whatever clothes might be required.  This gave us the picture of the unsupported clothes moving around on a dead black field.  From this negative we made a print and a dupe negative, which we intensified to serve as mattes for optical printing.  Then with an ordinary printer we proceeded to make our composite:  first we printed from the positive of the background and normal action, using the intensified negative matte to mask off the area where our invisible man's clothing was to move.  Then we printed again, using the positive matte to shield the area already printed and thus printing in the moving clothes from our 'trick' negative. This printing operation made our duplicate, compositive negative to be used in printing the final master prints of the picture." 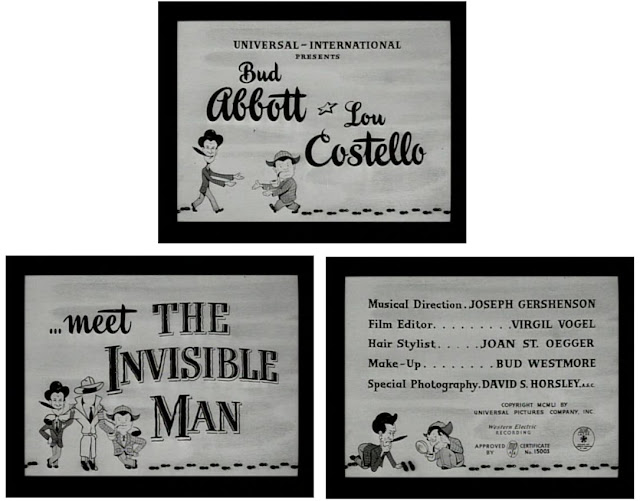