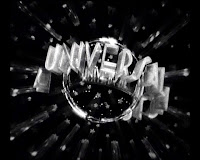 *I would like to acknowledge Domingo Lizcano, foremost matte historian, for helping me out with this photo tribute by supplying me with a significant number of rare frame grabs and images which supplemented my collection considerably. 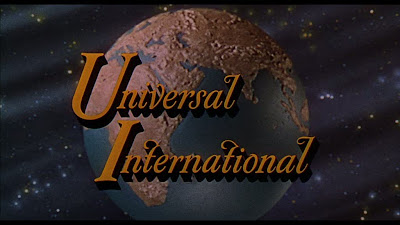 While assembling images and data for today's blog I was hard pressed to find very much info at all, despite the fact that Russ Lawson was one of Hollywood's busiest and most productive matte artists.  Not through lack of effort on my part, there just isn't much out there I'm afraid.  Universal has always been very poor at releasing back catalogue films on both DVD and even VHS.  The huge Universal and Universal-International catalogue still remains relatively untouched with so few titles actually available.  Twenty five years ago we'd be treated to many of these old classics on television on a fairly frequent basis, especially on Saturday and Sunday afternoons and a great afternoon's entertainment was certain - plenty of old pirate yarns and adventures, often loaded with matte shots and fun  in general.  The current abysmal state of television here in New Zealand has seen all of this old time movie slots vanish, with only recent multi-plex rubbish ever broadcast in movie schedules.
Throughout much of the history of Universal Studios, from the early thirties up until the early sixties, Lawson was very much a part of every picture released by that big studio with matte painting requirements - and as is usual for such backroom workers, never received a single film credit (to my knowledge) until his final film TARAS BULBA in 1962, and that film wasn't even a Universal film - rather a United Artists show, which says alot about his former lifelong employer.
Aside from several diversions into poverty row programmers in the thirties, Lawson was THE Universal matte department - a one man band, much as his counterpart Jan Domela was over at Paramount.  Throughout Russell's career several prominent photographic effects heads would oversee and of course receive screen credit on hundreds of Universal productions.  Most notable of these departmental heads was the legendary and extremely complex John Phipps Fulton - one of the genuine giants in the special effects arena.  Fulton's long time assistants Jerome Ash and David Stanley Horsley and finally toward the end of Lawson's career under Clifford Stine all directed the photographic effects unit, but with Fulton making the most profound statement in the role. 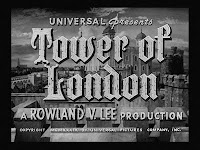 Early Universal films where matte painting was involved saw a teaming up of Lawson with veteran Jack Cosgrove on such films as THE INVISIBLE MAN and BRIDE OF FRANKENSTEIN.  As readers of this blog will be aware Cosgrove himself would go on to senior roles in the latter part of the thirties establishing and running prestige boutique matte departments such as the highly regarded Selznick special photographic effects unit.
The bread and butter of Universal was to a significant extent gothic horror films - a genre in which the studio excelled.  Naturally enough Lawson's glass painting was evident in many of these and a certain style evolved, with many wonderful examples illustrated here.  Haunted houses, forboding mansions and castles sillouetted in moonlight accompanied with wolf howls and requisite thunder and lightning are classic images that many of us remember sometimes more than the actual picture the glass shot appeared in.
Universal turned out quality product within this genre and knew a successful trend when it saw one.  As such the studio was slow to adapt and embark on new fangled processes such as colour.  In fact it took the studio almost seven years after the established use of the process to finally shoot a film in technicolour - the 1942 extravaganza  ARABIAN NIGHTS - which itself was loosly based on THE THIEF OF BAGHDAD.  The Universal film in turn started it's own little trend with a number of quasi-sequels and follow ups.  Russell's matte work in ARABIAN NIGHTS is beautiful - not just the 'special effect' but also the crispness of the composite photography where brush work is evident in some shots, almost suggesting an original negative marry up the image is that clean.  For fine examples of Russ's mattes on this film see later in this blog.
From H.G Wells and Bela Lugosi to Abbott and Costello and Stanley Kubrick, Russ Lawson painted for 'em all and I hope this small collection of frames will represent the bredth of Lawson's career.
For those interested in the long career of special effects maestro John P.Fulton, click here.
The Universal matte department was probably established by Norman O.Dawn in the 1920's.  In an interview sometime before his death, retired Universal matte maestro Albert Whitlock stated that to the best of his knowledge the original easel he had painted glasses on for decades was handcrafted by Norman Dawn himself.  The success of the Universal mattes and composites  were as much the effects cinematographer as it were the head of department, with long time visual effects cameraman Roswell A.Hoffman photographing each and every Lawson painting and carrying out all necessary optical work where required.  Hoffman dedicated his entire working life to the studio - from the early thirties on such shows as FRANKENSTEIN and THE INVISIBLE MAN right up until the 1974 effects Oscar winner EARTHQUAKE.  Hoffman must have composited thousands of trick shots over this extraordinary career.  As I've written before it's a shame that the authors of The Invisible Art - the Legends of Matte Painting didn't interview Hoffman before he passed away in 2002 as the Universal history in the book is sadly lacking.
Of the final few films that Lawson painted on I've learnt some interesting things of late.  SPARTACUS was a sizable matte showcase, even though most publications state that there is just the one matte shot in the Kubrick epic - the great Ellenshaw view of Rome (which interestingly was started on glass by Albert Whitlock but for unknown reasons Peter Ellenshaw took over and completed the mighty shot).  The film has a number of ambitious matte shots showing armies stretching into the distance, Roman architecture, beautiful sunset soaked crowds - all painted by Russ, though not many people acknowledge, nor seem to be aware of these  (see below).
Another of Lawson's last films, and the only one in which he received screen credit (to the best of my knowledge) TARAS BULBA is packed with spectacular, grand matte shots which really are good.  I've read recently that Whitlock also painted on TARAS BULBA which if correct is a curious crossover of the two talents - the outgoing and encumbent Universal matte men working on the same show.  If this is so I suspect that Whitlock painted as a sub contractor to Howard A.Anderson or Butler-Glouner who were the co effects providers.  I'd like to know the truth behind this interesting revelation.
According to author Rolf Giesen, Lawson came into a large inheritance in the early sixties and retired from a life long Universal career, with his parting words in handing over the keys to the matte department to the new arrival Whitlock ..."you can have it all".  I think Lawson passed away in the 1980's, though I'm not certain on this.
THE RUSSELL A. LAWSON GALLERY 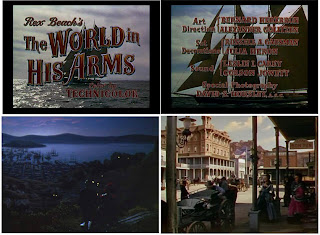