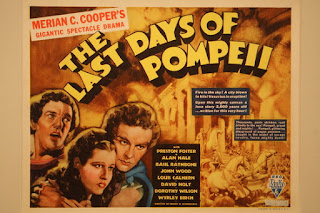 Among effects master Willis H.O'Brien's more atypical film credits would have to be the big Merian C.Cooper Roman-disaster epic LAST DAYS OF POMPEII (1935).  Whereas O'Bie was the specialist in stop motion animation as witnessed in a number of classic films, most notably KING KONG his skills in special visual effects were less often utilised elsewhere, with LAST DAYS OF POMPEII being a prime example.

I get the impression from all of the articles I've read on O'Bie that he never reached the degree of fulfillment in the field of special effects that he'd have desired - with often considerable gaps between assignments and many projects which never got off the ground such as GWANGI (pictured here with O'Bie posing with a Jack Shaw pre-production oil painting).  As if his stuttering film career wasn't impediment enough, the numerous personal tragedies that befell O'Bie were enough to sink the strongest of men.
POMPEII is a fascinating film on a number of levels.  It's a film that tries hard to give the big studio look to an apparently modest budget film from a minor studio at the time.  It's pretty well written and well paced with several set pieces that shine through.  Of course it's the climactic eruption of Mt Vesuvius that was the selling point for the movie, and even though we have to wait until the last reel to see it there is enough drama and spectacle throughout to not leave one wanting. 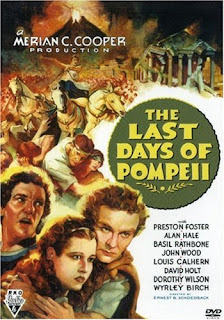 Naturally to achieve such a setting as ancient Rome and Jeruselem photographic effects were required, and these are for the most part plentiful and well executed.  O'Bie surrounded himself with many of his tried and true crew from the two KONG films, and some even from THE LOST WORLD - all names familiar I'm sure to anyone who reads this blog - Byron Crabbe, Vernon Walker, Clarence Slifer, Harry Redmond, Marcel Delgado and Linwood Dunn to name but a few.  Many of these key figures also worked on the excellent SHE (which is covered elsewhere in detail in a previous blog here), with both films coming out in 1935 the workload at RKO must have been considerable indeed. 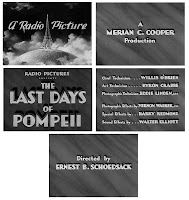 As this blog is primarily dedicated to glass shots I've assembled all of these here but not at the cost of overlooking the many miniatures and travelling matte composites, so these are here too.   Sadly I'm unable to locate an old magazine article I have from the thirties about this film which has photos showing before and after of some of Crabbe's glass shots.  If it turns up I'll add to shots to this blog. *(it did show up and it's now added just down this page 28/8/10)
I must say that the Warner Home Video DVD is up to there usual high standards and looks superb indeed.  Some of the matte shots are extremely grainy but that isn't due to the visual effect necessarily - more so down to the fact that many of those key narrative glass paintings occur during dissolves, which in themselves are optical dupes.  This isn't an uncommon irritation, for many older films had awful optical dissolves employed during matte painted shots, thus almost destroying the integrity of the visual effect that the matte artist and cameraman were trying to achieve.  I remember matte artist Rocco Gioffre once telling me of his utter annoyance at this exact phenomena, as the carefully painted and composited rooftop to an existing castle he had done for the movie ROB ROY being ruined by excess optical tampering to add a dissolve to the shot in the final film - an effect he said he could have facilitated quite easily at his end while making the composite, thus saving the image quality.  Of course this sort of 'wrecking' of such shots was dominant throughout the 30's and up until the early 60's where the optical transition such as the fade in or dissolve was orchestrated on separate elements altogether and spliced into the printing negative, with always obvious and distracting results - change of colour hue, grain and the rest of it.
Anyway, on with the show.... 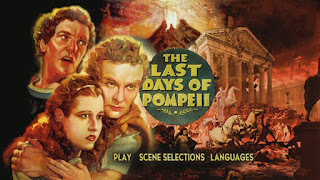