Walter Percy Day - the master of the matte

*Many of the images in today's blog are frame grabs from the excellent feature length video documentary by UK based film maker and special effects man Dennis Lowe and are used here with his kind permission.  Click here to go to Dennis' site where the extensive  and utterly fascinating interview with Susan Day, Percy's grand daughter is just one of the many worthwhile treats to be found.  Susan's own meticulously researched website on Percy with much background detail on the man and his long list of film titles may be found here.

One of the most important names in any historical survey of matte painting and special photographic effects development from the silent era of the early twenties right on through to the technicolor period of the mid fifties must be that of noted British artist and cinema pioneer Walter Percy Day.

A popular misconception among authors and filmographers is that Day was French - quite a popular misconception due in part to his long involvement as something of a celebrated cinematic svengali in the highly productive silent film industry in France throughout a significant period of the 1920's and early 30's.

As with other notable matte painters from the formative days of the medium, Day was first and foremost a fine artist - and a highly regarded one at that who's works would later hang 'on the line' (which in itself was no mean feat) at the Royal Academy in London.  An outstanding oil painter of the much admired (especially by this author) school of Orientalism, Day would in fact reside for several years in Tunisia as part of an active artists colony - a popular route for budding painters to follow in the 19th and early 20th century where many would find their artistic expression in London, Paris, Rome, Florence and Venice being the most popular for practically all painters of note, with Egypt and North Africa the place to be for those with an Orientalist bent.

As far as I can ascertain, largely from Susan Day's comprehensive biographical information, Percy's first involvement in the world of film came about in 1919 when he was approached to work for a time at Ideal Films at Borehamwood, near London.  The early photographic effects techniques employed to enhance or extend  sets were either in camera foreground glass painted shots with had been around since 1905 or the popular  alternative Hall Process technique, devised by British art director Walter G.Hall whereby painted cutouts on board were mounted strategically in front of the camera and married up with the set - an extremely effective method which, notably would later be adapted and used extensively and invisibly by Spanish matte effects maestro Emilio Ruiz for the majority of his career up into the 2000's, among others.

According to Susan Day's research, the British film industry went into a bit of a nose dive around this period, whereas the French film industry across the English channel was booming.  Percy saw an opening to utilise his newly found talents to the maximum and took advantage of the calling.  Day's talents in creating the impossible were highly regarded in the French film industry and he found himself called upon to execute many outstanding and elaborate glass painted effects shots (and even a few on screen acting cameos) on a variety of pictures, such as Abel Gance's NAPOLEON (1925) and THE THREE MUSKETEERS (1932).
It's likely that both of Day's sons, Tom and Arthur, were already starting to work (unpaid) for their father on films from the late 20's - roles they would continue well into the late 1940's.

In an effort to  circumvent costly delays on set where the whole production would grind to a halt while Day would create his  glass painting, Percy would adapt his matte methods to utisise the held take method where the initial live action plate would be photographed with appropriate black masking in place for the later addition of the painted matte as a separate exposure.  The latent image composite would be the mainstay for many practitioners in the international film industry for several decades, though as fate would have it, the steady sprocket to pin registration in the gate of the silent era 35mm French built cameras was not  achievable with the advent of sound and the new, 'improved' Debrie cameras where pin registration was inadequate, resulting in unstable  frame jiggle and, ultimately unusable matte composites - unlike the British made Bell and Howell counterparts which were rock steady workhorses ideal for such specialised requirements. 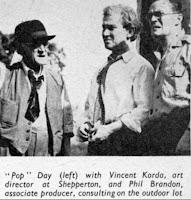 The year 1933 would see Day return to the British side of the English Channel and never look back.  The Hungarian movie mogul family, The Korda's were setting up shop at the enormous Denham Studios. The ambitious Alexander, Vincent and Zoltan would be the veritable Louis Mayer, David Selznick and Sam Goldwyn equivilants of the United Kingdom film industry with many grand and critically well received productions coming forth - almost all of which would enlist the services of Pop Day.  From initially humble and makeshift premises within Percy's very house, the little homegrown special effects operation picked up speed within a short space of time and quickly outgrew the very basic Day cottage.


Around this time to ease the ever increasing workload, Day would take on an eager young assistant by the name of Peter Ellenshaw.  Ellenshaw himself would of course in time become a legend of the painted medium - both in film special effects and in gallery fine art, and would always make the point of acknowledging the importance of Pop Day's influence in his own success "without whom, I'd still have been an angry young man with no sense of direction" as Peter said in his wonderful memoir 'Ellenshaw Under Glass'.


Among the influential films which Day played an important part in  over this period were THINGS TO COME (1936), SIXTY GLORIOUS YEARS (1938),  FIRE OVER ENGLAND (1936) and MAJOR BARBARA (1940), THIEF OF BAGHDAD (1940), LIFE AND DEATH OF COLONEL BLIMP (1943),  BLACK NARCISSUS (1947)  and ANNA KARENINA (1948) to name but a few.  Day's crew would by now primarily include Ellenshaw as assistant matte painter, Tom Day as camera operator, Arthur Day as draftsman with Wally Veevers as visual effects cameraman on several shows along with Douglas Hague as optical cameraman. Veevers told author John Brosnan in 1974"...I joined Mr Percy Day - known as Poppa Day to many people in the industry - who was a matte painter for Korda at Denham Studios.  I went to to work for him for two days but we got on together so well that I stayed with him for years.  Eventually he retired when he was about 84 and I took over the department, which by that time had moved to Shepperton."
Percy would take on a number of trainee matte painters once Ellenshaw joined the RAF during the war years, with Ivor Beddoes, Joseph Natanson, Albert Julion, Judy Jordan, Joan Suttie, George Samuels and Les Bowie among them.  It's long been debated as to whether Albert Whitlock ever trained under Day.  Some people in the know say "yes" while others say "no".  Bill Taylor maintains that Albert never worked with Day.  Whitlock himself, when asked this question by author Craig Barron, responded with "I never met him (Day)" - yet several interviews with Whitlock conclude with clear statements that he did paint under Pop with Les Bowie - with one interview stating "..Day was a better painter than any of us, though his mattes tended to be far too detailed and drew attention to themselves".


Such was the sense of intense competiton between Day and former protege Ellenshaw that the pair parted ways shortly after Peter returned from the second world war, with Peter headed to MGM's British base of operations and Day continuing on for a while at Denham until moving to Shepperton Studios (possibly via Highbury for a period?) in 1946 with several of his group including Wally Veevers and several of the matte painters.

The late Les Bowie who learned the matte process from Day described his time with Poppa Day to author John Brosnan in the indispensible special effects book Movie Magic -
..."I had worked with Poppa Day at Shepperton just after the war.  This was when he would have been the only one in the country doing matte painting.  He tended to make a great magic out of it and while I was there I realised there must be a quicker way of doing it.  His method was to use a number of girls who would paint and do only what he told them.  Firstly they would trace off a drawing of the original set onto a sheet of clear glass with wax pencil, then they would add onto it with slow drying paints.  It was a painstaking process that would take anything up to a month to complete...... there were endless tests to make sure that the colours matched etc."


The vast list of credits attributed to Pop Day make for interesting reading, with some being inaccurate and some downright perplexing.  Powell and Pressburger's beautiful film THE RED SHOES (1948) has long been attributed to Day and Ellenshaw but the pair had nothing to do with that film, based on the comments by Peter himself ,as well as those by matte cameraman on that film Leslie Dear who confirmed that Joseph Natanson, Ivor Beddoes and Les Bowie were matte artists.

Other odd credits I also doubt too, such as John Ford's HOW GREEN WAS MY VALLEY (1941), William Dieterle's HUNCHBACK OF NOTRE DAME (1939) and Alexander Korda's 1941 JUNGLE BOOK - all of which were American based studio films that wouldn't need to contract out matte work across the Atlantic to my thinking.  I'm also sure that Day had nothing to do with two David Lean pictures - OLIVER TWIST (1948) and GREAT EXPECTATIONS (1946) as both were Rank films with Les Bowie and fellow Pinewood based artists such as Joan Suttie

Percy would continue on as head of the special effects department at Shepperton, and even lived in a cottage on the actual lot for another six or seven years with his second wife, who happened to be Ellenshaw's mother. Filmwise, Wally as his principle effects cinematographer, George Samuels as key matte artist and designer with George's brother Ted as physical effects chief.  Matte painters Ivor Beddoes, Judy Jordan and Joseph Natanson remained with Pop until his retirement in 1952 and would themselves go their own ways within the next year or two respectively carrying on their matte artistry for other studios.

Percy would be rewarded in 1948 with the OBE (Order of the British Empire) for services to the film industry.  From what I've gleaned on Day, he always tended to downplay his 'movie magician' moniker and, as with many in that field, just tended to see it as a job with some creative challenges occasionally, though pure painting was his true passion.  Though the relationship between Day and Ellenshaw was apparently a strained one by all accounts (Day was a notoriously temperamental and oppressive figure at the best of times, even frightening, according to Peter), Percy and wife, Adeline would eventually 'pull up the tent pegs' and , in 1959, would move across the world to California to be with Pop's one surviving son, Thomas, and later on moved again to live out their years near the Ellenshaws. Walter Percy Day passed away in May of 1965 - not long after his former apprentice Peter Ellenshaw was rewarded with an Academy Award for his beautiful matte work on Disney's MARY POPPINS...... I wonder if the old man felt a sense of pride in the creativity and eye to translate the artist's vision to the silver screen which he had passed down to young Peter.  I reckon so. 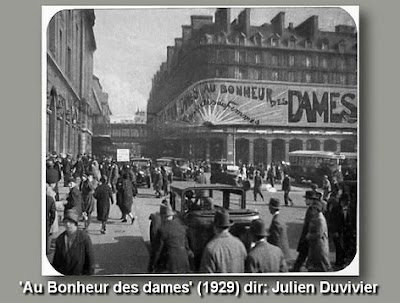