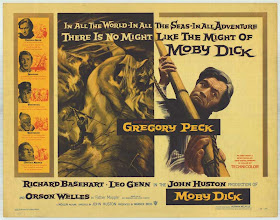 Although I have a profound dislike of actor Gregory Peck for reasons I can't exactly pinpoint (he's always been just such a dull performer who seems to blend in with the wallpaper to my mind...or maybe it's that flat monotone voice?) - I'll have to make an exception for the 1956 John Huston film based upon the famous Herman Melville book, MOBY DICK. 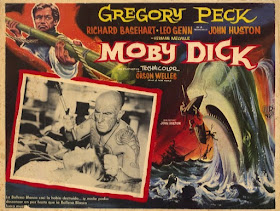 The film actually stands up very well some 55 years or so after hitting the cinema screens, and to be honest I enjoyed it far more this time around - some 25 years since I last saw it on television.  What impressed me no end were the visual effects, which naturally is what my blog is all about.  They are tremendous.  While my blog is essentially a tribute to matte painting in film, I occasionally extend that framework to include other old school effects techniques such as cell animated visual effects, model shots and ingenious hand done opticals of days gone by (and I have so many of these I'll never have time to cover all of this stuff in my archives).
While MOBY DICK does have matte art,  it's  limited to just three shots that I could count, and they are very nice shots at that, it's the superb miniature work that I wish to cover here today.  These shots really do stand the test of time and look sensational, even more so as they all involve water 'miniaturisation', and anyone familiar with tank effects will know how damned hard it is to produce convincing scaled down water effects, though the crew here have done a most impressive job in this respect - far better than one would anticipate for the era.

The picture was released by Warner Bros, though as far as I know they had nothing to do with the production.  The show was filmed in England by mostly British crew including cinematograper Oswald Morris and production designer Geoffrey Drake - himself a soon to be visual effects designer on many Carl Foreman pictures such as  MacKENNA'S GOLD and the two GUNS OF NAVARONE pictures.

Unsurprisingly for the era the effects work went uncredited, though I can tell you that several names in special effects work were heavily involved.  British miniatures specialist George Blackwell, often associated with Pinewood productions, who had a long history of supervising model shots on films such as the excellent THE DAMBUSTERS and CAPTAIN HORATIO HORNBLOWER.  American mechanical effects man Augie Lohman - himself a long time veteran of explosive effects work and mechanical rigs was also involved here.
The credits published on imdb also make a mention of two other interesting names - make up man Charles Parker is credited for the whale model, along with Robert Clarke who is listed under whale consultant.   Parker was an early exponent of make up prosthetics as I recall, with a nasty little UK Donald Pleasance horror picture called THE MUTATIONS having some terrific creature effects.   Just how the beast was articulated - both in small scale form and for the large scaled sections of whale I have no idea, but it's teriffic.

The shots are all superb and the matching between the scale footage and the ocean shot footage is terrific.  Whoever looked after the lighting camera duties on the miniatures deserves a pat on the back. I also spotted first assistant cameraman billed as Paul Wilson.  Wilson later became Derek Meddings visual effects cameraman on many films throughout the seventies and eighties.  As far as the three matte painted shots go I'd put money on these being executed in the UK - possibly by Tom Howard's department at MGM-Elstree, where several shows of the decade and beyond were supplied with opticals and matte shots.